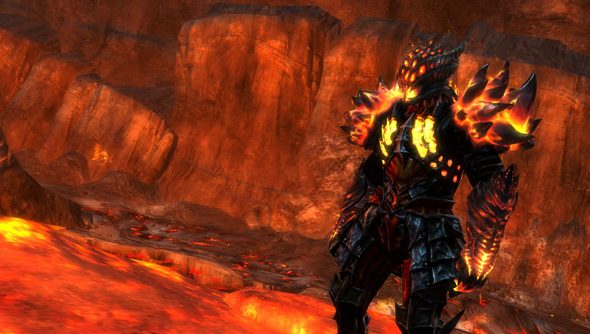 You know how people get about eggs. They’ll scour supermarket shelves for duck dumpings to turn into extra-creamy omelettes. So you can imagine the fuss over dragon eggs, which are not only larger but far rarer – the two traits yolkonauts prize above all else.

The situation’s much the same in Tyria, where rumours of a wyrm zygote have given every faction in Guild Wars 2 a reason to bash each other in once again. That’s the premise of Tangled Paths, the latest episode in ArenaNet’s Living World Season 2.

The dragon egg might be the key to defeating the winged bastards that’ve intermittently plagued Tyria – fight fire-lizard with fire-lizard, sorta thing. The world’s leaders are particularly thirsty for the bloody of the Elder Dragon Mordremoth, who attacked the Sylvari’s Pale Tree in Season 2’s last episode.

Trouble is, nobody seems exactly sure where the egg is – only that it’s in the possession of the Zephyrites’ Master of Peace.

As with previous updates, you’ll have two weeks come November 18 to log in and unlock permanent access to this leg of the story. Miss that window, and you can expect to pay a onetime fee for “DVR-like” replay functionality.

Have you managed to keep up with the unprecedented pace of the story updates for one of the best MMOs on PC?