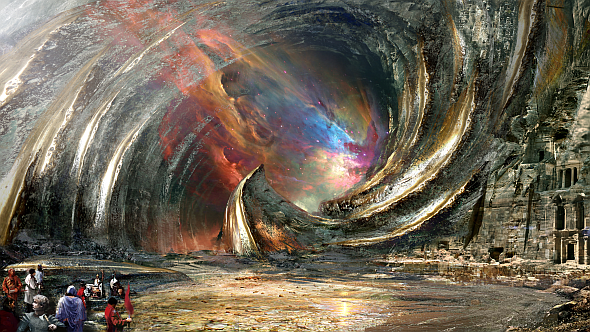 If I had to name the videogame genre in which it’s easiest to fall back on clichés, it would be the fantasy MMORPG. Not only is fantasy saturated across all media, but it must be especially tempting to avoid creative risks when pursuing a mass audience, as most MMOs do. Guild Wars 2, though, has achieved the enviable feat of standing out in a genre full of identikit castles and formulaic tropes. In this, its art is crucial.

With its unique takes on fantasy tropes, generous content model and of course, stunning art, Guild Wars 2 stands out as one of the best MMOs on PC.

Thus the retirement of art director Daniel Dociu, who served in that role since 2003 when the original Guild Wars was yet early in development, is a Big Deal. Stepping into his shoes is his son Horia, and we’ve been speaking with him. 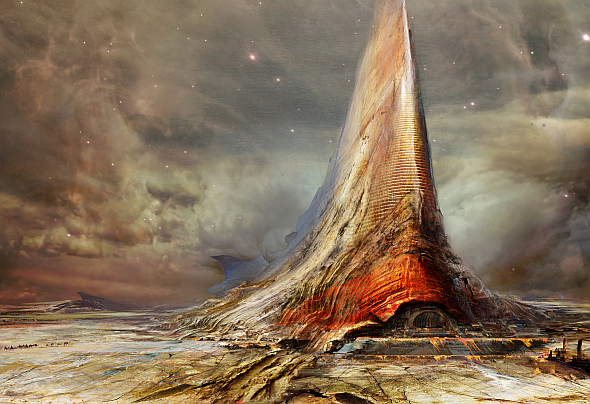 He begins by making clear what’s not going to change.

“There’s this principle that Daniel instilled in all the artists here, which is that you’ve gotta be able to take a concept or an idea and push it yourself,” Horia he says. “There’s no such thing as a concept here that’s a strict blueprint – unlike other companies, where they put a stamp on a concept and say ‘it’d better look identical in the game’ – everyone here’s encouraged to embellish upon that.”

The analogy he uses is playing jazz. Miming a tuning fork – “Ding!” – he says the concept art sets the key, but within that key, every artist is encouraged to improvise a little music of their own.

“As long as it’s within the spirit that was intended [by the concept], and hits all the gameplay and lore principles we need it to, people are definitely encouraged to bring their own spark to the game. Not just because we think the end product is better, but because it keeps people interested and motivated and excited, and that energy can be felt by the players.”

Unprompted by me, he uses Guild Wars 2’s flamboyant shoulder pauldrons – some of gaming’s most delightfully ludicrous this side of a 40K Space Marine – as an example. “If you’re handed a concept for a new Norn armour or something, sure you can go one-to-one, but there’s gonna be certain things you find along the way, like: ‘Why don’t I poke these shoulder pads out more, so that as the model turns it’s got a more interesting silhouette?’ Or even, ‘I’m gonna totally redesign the shoulder pads, they gotta be cooler’, or, ‘I’m gonna redesign the whole thing, but just keep the spirit of the concept.’” 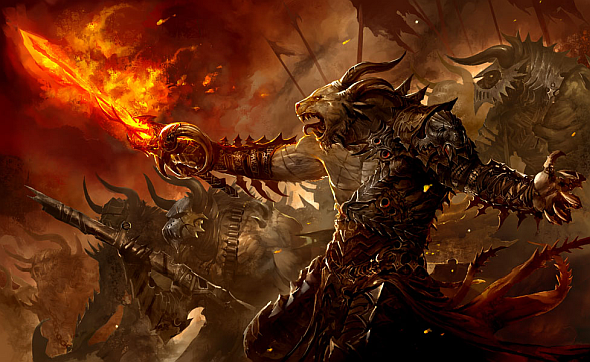 None of this is to downplay the importance of the concept art, Dociu is quick to add: not only is he full of praise for those who create it (they are fine artists, he says – “you could put this stuff in a book, or on the wall of a gallery”), but its role in setting the tone for modellers and more detailed artists is crucial. “I’ve seen games that looked uninspired, and I Googled their concept art, and it’s a beige fart, I’ll be honest with you. It’s just unimpressive,” he says.

The concept should breathe an emotional spirit into something: “We’re looking for people who give us the adjectives for the modellers: badass, ferocious, ravenous, bloodthirsty – those are the words that we get out of the concept art,” he says, enunciating each with relish. “And then we’ll hold that as a yardstick. We won’t say: ‘It needs to look identical to this’, but we’ll say, ‘It’s not as mean as this concept, get it meaner.”

This is why – at least in Guild Wars’ case – it’s a wrong question to ask why the game doesn’t look like the concept art. It’s meant to be paraphrased, not copied verbatim. This is an approach that must take a lot of faith in the abilities of junior staff, I speculate.

“Absolutely,” says Dociu, proudly, because “without that trust I think people are afraid to make mistakes.” At ArenaNet, however, artists have the confidence to start a piece of work from scratch if they’re “not feeling it”, and Dociu says nine times out of ten they’ll validate his trust with a better result. So it’s ok to give them the extra time they need.

“It’s not about one concept every two days or anything, there’s no set rhythm. If something took you a week but it really got out what you were feeling, I know they’ll make it up the next week, they’ll do three [pieces]. It’s just how the artists work, and that freedom to make mistakes is imperative – otherwise people stiffen up and won’t take chances, and when you don’t take chances, there’s no happy accidents.”

On Horia, and staying weird 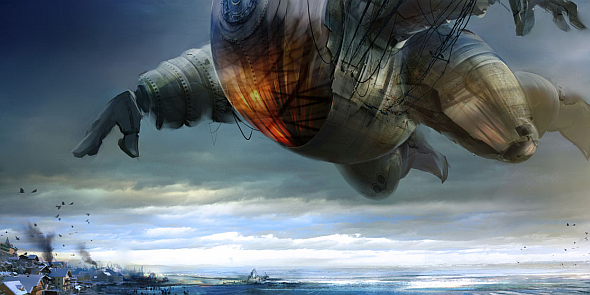 This scope to make mistakes and to indulge their creativity is how people within ArenaNet have been able to work “on the same IP for decades and still not be sick of it,” theorises Dociu. It’s certainly what tempted him back to ArenaNet in January last year, after four years as art director at Sony studio Sucker Punch. “I started at ArenaNet in 2003 and I’ve really grown to understand and love what Guild Wars is. I came back because of Guild Wars. I think it’s very much part of my artistic sensibility.”

With that said: “Any artist is gonna have their own lens that they look at things through, and I can’t fake mine. I can’t make mine be more like Daniel’s – or anybody else’s for that matter… Naturally there’s things that are gonna be just more up my alley, because I’m my own person with my own point of view.”

I ask if this means there will be any noticeable changes to the way Guild Wars 2 looks in the future, and, to emphasise what he feels it’s important to retain, Dociu gives a bunch of adjectives to define its aesthetic now: artistic, artisanal, hand-crafted, epic, colourful, brilliant. I don’t feel particularly enlightened, but in fairness I suppose jazz is equally tricky to nail down with mere words.

What is clear is the importance of progress: the key question seems to have always been: how can we be like Guild Wars, but more?

“And that’s something that, if you look at Guild Wars 1 vanilla all the way up to the Heart of Thorns, you can definitely see that there’s been that push,” says Dociu. “And, if anything, I hope to sort of speed up the curve.”

An aversion to clichés of the kind I mention above seems to have also been explicit since the beginning:

“We try to push ourselves and make a new twist on something that’s been maybe stale in the fantasy genre,” says Dociu. ArenaNet are “always trying to keep things interesting and new, so that we stay excited about it, and I don’t think that’s anything that’s changed because part of the DNA of ArenaNet is: stay weird, stay cool, look for the next thing that’s inspiring, be aggressive.”

On the merits of purple fog 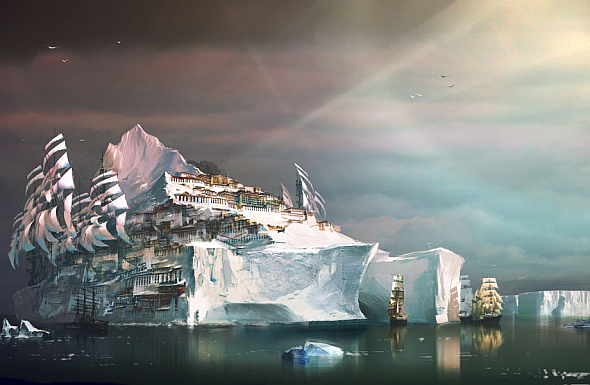 Guild Wars 2 has been around a while now (since 2012, in fact), and still runs well on machines we’d consider very dated by today’s standards. I have to wonder if he ever feels creatively compromised by those technical limitations?

He points out ArenaNet have tackled the same problem before with the original Guild Wars, and their solution was to lean into the “smoke and mirrors that games are actually really good at”. As we’ve heard, his goal is to get players to feel things, and “there’s ways to get an emotion across even if we can’t fully build this castle – can it be in the skybox, can we get the impression of this, can we trick it?”

Equally, if you aspire to photorealism, says Dociu, the best you’re ever going to manage is to almost achieve it. Here he refers to his experience at Sucker Punch:

“We were scanning a denim jacket, and scanning shoes, and that’s all well and good, and it’s a technically amazing feat to see something and go: ‘wow, that’s almost lifelike.” Even if, after what Dociu reckons will be many years, we achieve photorealism in games, “what are you gonna do [in those games]?” he asks. “Go to the supermarket?”

Whereas, in a fantasy world that’s more stylised, “if we need purple fog, we can put in purple fog, as long as it looks beautiful and harmonises, whereas a real-life game can’t.” This helps Guild Wars stand the test of time. Compare it to, say, a FIFA or a Madden from five years ago, “and I guarantee you it looks atrocious compared to today’s football games. But Guild Wars 1 is not terrible-looking, it has that storybook quality. Sure, it’s low-polish, the textures are a little more blurry, but it still has a bit of charm.”

On surprise and delight 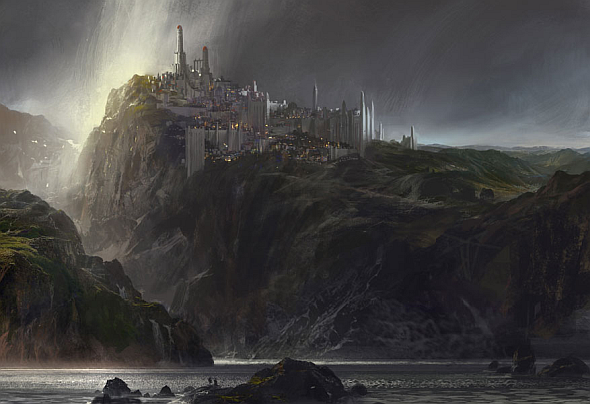 Dociu gives another ArenaNet mantra that he concedes is “a very high-level thing, but I think it serves us well: we want to surprise and delight players.” Vague as that is, Dociu says keeping these emotions in the back of one’s head when working on a new area or new creatures raises questions like: “What would I want to see? What’s interesting? What’s different? A lot of the remixes, if you will, that you’ve seen us do of [fantasy] tropes is because we got bored with them. Someone’s already done them.”

ArenaNet have no interest in rehashing what you – and they – have seen before. Though he insists that they listen closely to their fans, it’s impossible to second-guess what the customer would want. “So we have to find what’s gonna surprise and delight us, and so we really do make games for ourselves… We’re all gamers, all of us play a ton of stuff – I’ve got every console. We just wanna have fun and do stuff that we haven’t seen and haven’t played, and through that excitement of us being personally stoked on things, that kinda comes up and the end product shows it.

“I think if we keep to those tenets we’re not going to need to just artificially invent some kind of new art style or anything like that.”

So there’s no reason for anyone to worry that we’ll see a sudden lurch towards the dark and gritty in Guild Wars 2’s art style (a notion Dociu mocks). Far from stamping himself on Guild Wars, Guild Wars has stamped itself on Dociu. Not that anyone is worried.

“There’s so much positivity in our community,” Dociu says, fondly, when I ask how his appointment has been received. “When I took this new gig and my pop was taking off, it was just, ‘Hey, good luck man,’ and, ‘Thank you, Daniel, for the wonderful art’. You have no idea how nice it was to hear that stuff. It was like, ok, I’m not gonna fuck up hundreds of thousands of people’s games, they’re excited to see what’s new around the bend.

“When the fans don’t like something, they’re very vocal too, but we can’t try and guess what they’ll like. We really have to be true to ourselves, and so far that’s worked pretty darn well, so we’ll continue to do that as long as we can.” 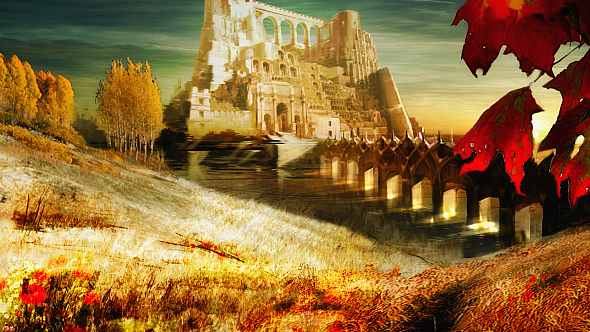 Did you know pre-Searing Ascalon was added to the original Guild Wars at the last minute? Here’s the story.