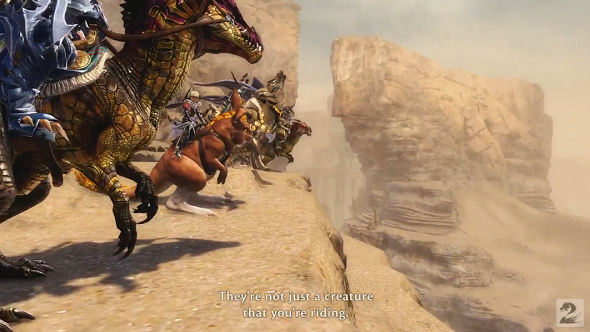 ArenaNet have revealed the second big expansion for Guild Wars 2, titled Path of Fire. In it, players get access to mounts for the first time, though they’ll be completely different to how they’re handled in most MMOs – each is a new traversal tool with its own movement ability.

For something fresh, check out our list of the best new MMORPGs.

There are four mounts in total: the raptor, the springer, the skimmer, and the jackal. The raptor is a rideable dinosaur that lets you leap across canyons. The springer is described as a mutant rabbit that lets you pounce high into the air with a charged jump. The skimmer is a giant manta that can skip across water. Lastly, the Jackal is powered by magical energy and can blink forward, even changing direction mid-blink.

You’ll be riding these mounts across the Crystal Desert, a place that’s been untouched by man for 250 years. It’s where humans used to commune with the gods, but now you’re ghosting one, chasing Balthazar and his army across it.

The Crystal Desert features five new open-world zones, which ArenaNet say are their biggest ever. On top of all this, there are bounties, world events, bosses, and even mount races. If you’re in it for character power, there are also nine elite specialisations – one for each class – to choose from.

Path of Fire is out on September 22. Check out the announcement video below: