Guild Wars 2’s Path of Fire expansion is out, adding mounts to the game for the first time. Of these, four were previewed ahead of launch, but players have been delighted to discover a ‘secret’ fifth: the Griffon. Developers ArenaNet tell us about designing and implementing the game’s best-kept secret to date.

With Path of Fire, Guild Wars 2 just got better. And it was already one of the best MMOs on PC. 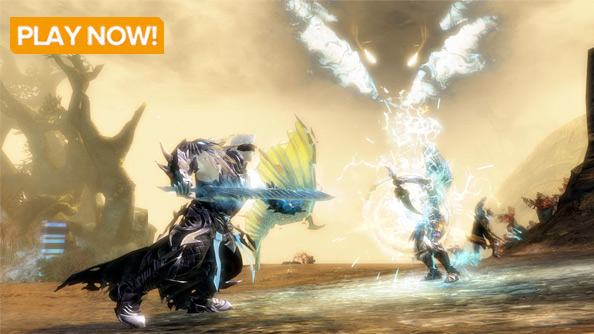 “An aerial mount was something we were planning from the get-go,” says design lead Roy Cronacher. “Each mount had a specific terrain or puzzle type that it was focused on, as an extension of the ‘joy of movement’ approach we’ve taken to exploration in Guild Wars 2. It was tough finding a flying creature that also made sense running on the ground, but once we thought of a griffon it was a perfect fit.” 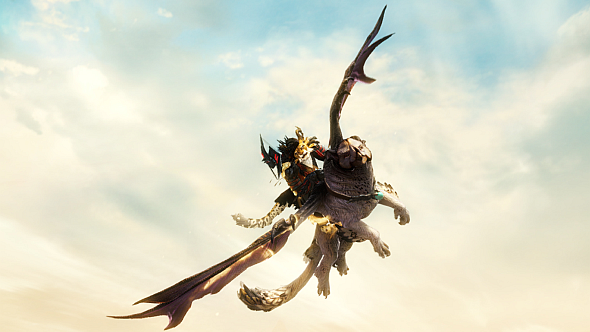 Propose a flying mount in Guild Wars 2, and there’s an obvious challenge in that its content to date has been designed with players’ feet firmly on the ground.

“We knew we had to be careful with how we went about tackling ‘flying’ in the game,” says Cronacher. “If we did free flight it would break a lot of content and invalidate the other mounts, which we didn’t want to do. We had to find a balance of feeling like the flight was natural and fun, but focused on player skill and manipulation, rather than free omnidirectional flight.”

Gameplay programmer Joel Helmich identifies some specific pitfalls they wanted to avoid. “We didn’t want the straight vertical gain to exceed that of the springer,” he says. “We also wanted there to be some amount of skill required to traverse long distances, and some restrictions on when such travel was allowed, such as a minimum starting height. Finally, we wanted to accentuate the most fun thing about mounts, which is their movement. A traditional flying mount that could hover indefinitely and move freely in all directions wouldn’t really fit the requirements. Instead, the griffon rewards players who are smart about their take-off location, and how they handle its climbs and dives.” 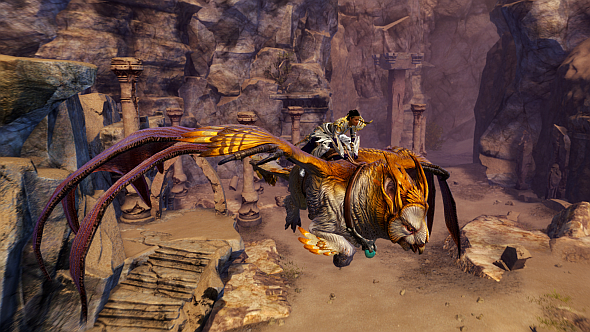 Understandably, this made the griffon by far the trickiest of Guild Wars 2’s new mounts to design. Cronacher says it “took a lot more iteration than any of the mounts in order to dial in its movement.”

“There are a lot of mechanisms that got added to make griffon flight function as it does, often as workarounds for practical limitations getting in the way of the gameplay we thought was most fun,” says Helmich. “This was over and above the expected challenges that came with updating our movement system to fully handle a mount that could pitch up and down. The time spent on new code, as well as tuning and tweaking movement parameters until flight felt right, took more time than similar work with all of the other mounts combined. The results suggest that the effort was well worth it, though: we’re proud of all of our mounts, the griffon included, and players have responded really positively to it.”

Indeed, part of the community’s response is to do with the fact that the griffon was kept secret, unlike Path of Fire’s other four mounts, which were trailed ahead of the game’s release. Why them, and not the griffon?

“We wanted something really unexpected and awesome that would surprise players, and since we were already putting the griffon at the end of the game, we felt like it was a perfect candidate,” says Helmich.

“Most players only expected there to be four mounts, and we wanted to exceed their expectations,”adds Cronacher. “We had a lot of fun at the office watching the community as they progressed through the expansion and found the griffon.

“These days there usually aren’t many surprises in games due to betas or reveals, but we think it’s a really cool moment for players to find something big and unexpected.”