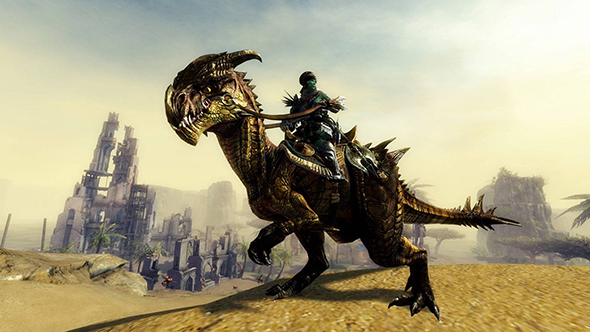 Guild Wars 2 just celebrated its fifth anniversary and shows no signs of slowing down. Yet, up until now, the game hasn’t offered some seemingly essential MMO accoutrements, like rideable dinosaurs. Thankfully, the upcoming Path of Fire expansion is set to correct that egregious error, and the team at ArenaNet have put together a new developer diary showcasing their approach to mounts.

Looking for more? Check out our list of the best MMOs on PC.

There are more than dinosaurs when it comes to mounts, but why would you want to choose anything other than a vicious velociraptor able to make giant leaps across otherwise impassable canyons? Maybe you’ll be enticed by the adorableness of the vertically-leaping springer, or the power of flight provided by the manta-like skimmer. The jackal will even offer a quick teleport out of trouble.

Four options might not seem like a lot, but ArenaNet promise that the unique movement abilities of their mounts will make sure that they all feel totally unique and capture the joy of moving through a vast fantasy world, offering more than the standard MMO speed boost. Path of Fire’s new areas are much larger and designed around the movement abilities of each rideable creature, ensuring that those new options don’t feel superfluous.

The highlight of the dev diary is the bit on audio design, which shows one member of the team directing monstrous vocalizations with a talk box like some kind of druidic Peter Frampton. That’s dedication.

Path of Fire is the second major expansion for Guild Wars 2, and in addition to mounts it will feature elite specializations for each profession, a whole new desert area to explore, and a new set of quests detailing the desperate battle against a rogue god bent on destruction. The expansion launches on September 22.