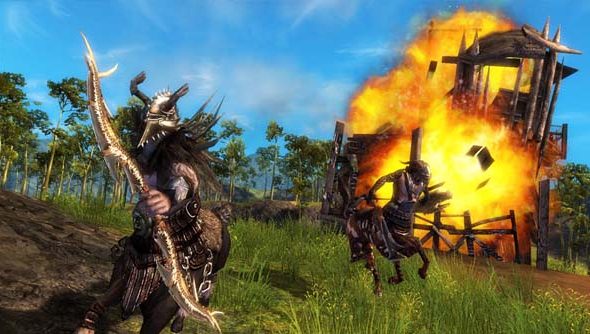 The reason things are good? Guild Wars 2 is a success: critically, commercially and now, qualitatively.

The game’s reached three million sales: a major and important milestone. As importantly, players are still playing and enjoying the game. Player concurrency numbers, the amount of people playing the game at any one time, have been consistently rising for the past five weeks. And now, speaking from ArenaNet’s offices in Bellevue, near Seattle, Colin’s outlining the plans the team have for the game in 2013. That includes: new abilities for players in Guild Wars 2’s World vs World, ambitious plans to tell a year long story, and help for players to enter Guild Wars 2’s unstructured, but liberating end-game.

What’s more: the goal for now, Colin explains, isn’t necessarily attracting new players. It’s about looking after the players they already have.

First, a brief lesson in MMO-economics. Every MMO developer lives and breathes their concurrency curve. In the lifecycle of an MMO, you tend to see an early spike, where fresh faced players log in for the first time. That spike inevitably drops following launch: to a concurrency base. What happens next determines the future of the game. “For games that aren’t doing well, that core base over time slowly drops. A lot of them respond by going free-to-play, which causes them to spike back up and hit a new concurrency base.”

There are a few games that have managed to grow their concurrency base in the period following launch. World of Warcraft. Eve Online. And now Guild Wars 2. “We hit our flat concurrency numbers back in November, and we’ve consistently grown every single week for the past five weeks,” says Colin. “Our core concurrency base that we hit back in November was really exciting – but to see that number going up is really, really exciting. especially because a lot of the pieces that will make the game more exciting are coming in January, February and March.”

The biggest and most ambitious of those pieces is their commitment to a new form of storytelling. Over the next 12 months, Guild Wars 2 will regularly drop new episodes of story content throughout the game world.

The first beats of those episodes were deployed in the recent Flame and Frost update, with refugees fleeing the Shiverpeak mountains, arriving in Hoelbrak and the Black Citadel. Colin won’t say what’s brewing; but he will say how it will brew.

The plan is to create multiple arcs, with content appearing in dungeons and the open world. ArenaNet will create new areas to explore and new events within existing areas. Some of those events will be permanently available to players. Others will disappear from the game as they are completed. “If you don’t see it in that period of time, you’re not going to experience it,” says Colin. “They may play out in dungeons, they may play out in the open world, it’s really a matter where each storyline best fits.”

It will feel, says Colin, “almost like a pen and paper RPG, where you’re on this long adventure,” but playing out in a persistent MMO world.

The goal: to keep players logging in, week in, week out. Or day in, day out.

But there’s a roadbump in that process: Guild Wars 2’s endgame. One challenge every high-end player faces as they reach Guild Wars 2’s level cap is “what now.” What do I do to occupy my time now I’ve stopped levelling. There’s plenty to do: PvP, more questing, crafting, and aiming for 100% completion. But Johanson acknowledges that it’s poorly signposted – that players struggle to understand what they could, or should, be doing. That’s changing.

“One of the things we tried to do in Guild Wars 2 is make it a game where you can play the game the way you want to play it,” explains Colin. “We’ve left it very open ended. For the explorer types that is something that is particularly up their alley. For players who need more guidance or direction – who want to be shown: these are your options, now pick one – I don’t think the system we have does a great job of showing them what to do in our game. That is absolutely one of the things we plan to address this year.”

The endgame focus highlights the kind of nuts and bolts background improvements MMOs need to stay competitive. There’s tech work going on, too. Following oversubscribed previous events, in which player numbers battered the Guild Wars 2 servers, the team are working on technology that should improve crowded scenes. Culling tech developed for Guild Wars 2’s World vs World – that allows the game to intelligently remove players from your view to maintain frame and response rates – will be applied to the open world, prioritising creatures that are attacking you over other players. “Right now, we’re at the point where you can see giant battles with 50 to 100 people or so. We’d like to get to the point where you can see hundreds of people on screen.”

And with the culling tech comes a reason to fight in World vs World, Guild Wars 2’s ambitious open world competition. Currently, players who want to fight in PvP landscapes do it for small bonuses to health and crafting. There’s no personal reason to fight. That’s a problem that Arenanet intend to address.

“There needs to be stronger incentives for people to play world versus world,” says Colin. There are two systems in the works. The first is a personal progression system that will unlock new abilities for players the more they play World versus World. Those abilities, says Colin, “make your character more useful, but they don’t make your character inherently more powerful. They won’t increase your strength or damage output. They just make you more functional.” The second reason: Arenanet want to improve the server rewards for fighting beyond a weekly win scenario. It will take the form of a new system “that provides reasons for your world to be fighting at any given time, rather than across the week,” explains Colin. “You might be on day 6, and you’re losing the week, but we want to give a reason for you to hold the region, even for an hour.”

Guild Wars 2 success is heartwarming. It’s an MMO without a subscription fee; and without an associated free-to-play gouging. Its success means it can get better; and if it gets better, it may get more successful. The Guild Wars 2 team aren’t chasing growth for growth’s sake; their first priority is to keep their existing players happy.

“Our focus is: how do we make it so the core group of players have the best possible experience they can. If we continue to build on that, that core group will be more excited, they’ll play more often, and maybe some of those who took a break will come back.”