It’s been nearly six months since Guild Wars 2 introduced a new dungeon: the Fractals of the Mists. With the finale of the Flame & Frost saga, they’re finally adding something new. Tyra’s heroes must journey into the depths of the Shiverpeaks… to the Molten Alliance and their dubious weapons facility.

I’ve been playing this dungeon for a few days. Here’s what to expect.

Spoiler Alert: This hands-on will spoil some dramatic moments. If you care about your initial experience then I would advise running through it yourself.

Molten Weapons Facility will only be around temporarily. You have until May 12th, until it’s removed from the game. The dungeon’s entrance dynamically shifts: you enter the depths of the Shiverpeaks from multiple sides. The closest waypoint I traveled to was the Vendrake’s Homestead Waypoint in Wayfarer Foothills. Whether that remains the nearest waypoint is a mystery. 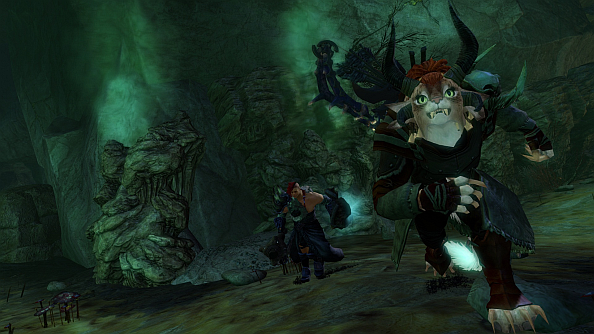 Upon entering the dungeon you meet the familiar Charr and Norn duo of Roxx and Braham. They’re teaming up to end the threat of the Molten Alliance and free the Charr and Norn prisoners.

The Molten Alliance have made their home in the heart of the Shiverpeak mountains, harnessing the underlying lava to power their weapons. The dungeon starts off with narrow tunnels and then progresses to huge mined out chasms, chock full of deadly machinery and weapons. It’s quite impressive actually, regardless of its sinister nature.

You’re immediately presented with a dynamic event when Roxx activates a dredge drill to tunnel into the facility. As it drills deeper into the mountain it reveals pockets of caves full of angry monsters. Each pocket has a mineral vein which can be mined once per day, sometimes containing valuable orichalicum.

The first boss is at the end of the tunnel is the Weapons Test Room. It’s piloted by a Dredge engineer that has been conducting experiments on Norn and Charr prisoners. The results: horrific sentient weapons. 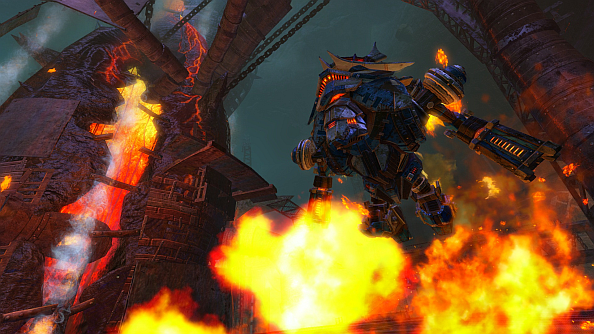 Once you’ve fought through his guards and saved what prisoners you can, you enter a large room. This is where his fight takes place. Once you’re locked in, the Dredge Engineer uses you to test his super weapon. It can kill you in seemingly a hundred ways. Weights drop from the ceiling while fiery balls of death and equally deadly fiery tornadoes flood the room.

To kill him, you need to attack the thermal core at the centre of the room.

Positioning is key to survival. At certain points during the fight, enemies spawn and have to be taken down quickly, while dodging incoming death from the super weapon. It’s complicated by Protectors: mobs that give invulnerability to any allies within a big circle. You have to knock the protector out of his circle if you have any chance of killing him, or his allies. This mechanic is something you need to learn immediately: it’s repeated throughout the dungeon.

Destroy the thermal core and the dredge engineer faces a pretty comical end. I don’t want to spoil it.

Loot in the Molten Weapons facility has had an update. There’s a new stat combinationm “Sentinel”: vitality, toughness and power. That’s going to be a popular choice for those of you who like to be hard to kill. You’ll also find orichalcum emblems that are used in crafting with this stat combination. This should make crafting this set’s exotic weapons and armour considerably cheaper. 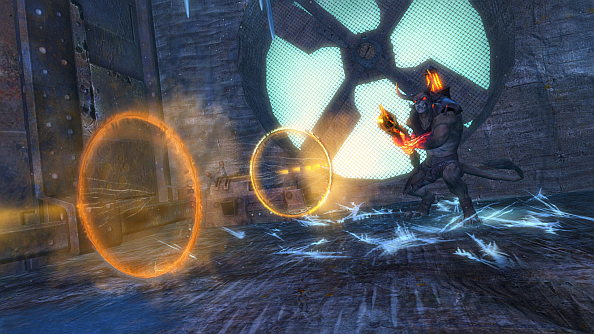 To reach the final boss and the rest of the prisoners, you’ll have to pass through an icy coolant reactor. When you’re in the cold, you’ll be affected by frostbite; the same debuff that appeared in the Fractals of the Mists. Unless you destroy the coolant controls, your health will slowly be eaten away. At the end of the coolant reactor you’ll will face a flame effigy which should be an challenging foe, but a familiar one.

Once on the other side you enter a huge chasm where prisoners are being set to work by their fiery masters. 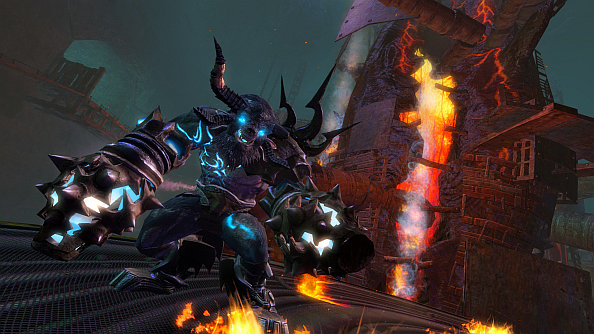 Roxx and Braham don’t waste any time freeing their brethren, and slaying anything in their wake. With a decent rabble behind you, you should come to another ominous arena-styled platform.

The final boss fight is one of the best I’ve fought in Guild Wars 2; a brilliant combination of everything you’ve learned throughout the dungeon. Here you fight two monstrous enemies: a huge stonefisted Charr named Berserker and a Dredge in an iron man suit called Molten Firestorm. They fight by using all of the new mechanics that you’ve tackled in the previous dungeon. They are very, very dangerous.

Whenever you take 25% of either one of their health bars away, the other boss will acquire an enrage buff; he needs to be tanked and dealt with if you want to avoid death. Once his stacks of enrage have been extracted, you can then continue to dps the other boss – swapping as required.

Once you’ve killed one of the pair, the other will take on the powers of his fallen ally. You then have to kill the survivors all over again with new deadly abilities.

Once you eventually prevail, you will have one last task: to blow up the facility and get the hell out of dodge as the whole place comes crashing down. Your reward will be a good chunk of xp, karma and silver for your efforts and a lovely little cutscene between Roxx and Braham.

I loved the Molten Weapons Facility: it’s a refreshing addition to my usual dungeon rotation. The fact that it’s not a permanent fixture is sad, but just gives you more of a reason to repeat it. There will be a finale event in Lions Arch on May 12th, so make sure you don’t miss out on the celebrations.

With the Flame & Frost out of the way, we can only wait to see what follows in May.