Guild Wars 2 is now a year old. It’s been quite a journey for ArenaNet: with sixteen major updates to the game since its debut, the team have kicked it up a notch from monthly updates to bi-weekly updates. It’s these rapid content injections that ArenaNet are focusing on for the immediate future, further shaping their “living world”. We sat down with president and founder of ArenaNet, Mike O’Brien to discuss the games anniversary, and what’s in store for the future.

We’ve all seen how the launch of an MMO can be one of its most important times, foretelling success or failure for the game. Servers have to work through the stampede of players, bugs have to be at a nonexistent minimum and extra content has to be at the ready to feed the ever hungry players. For Guild Wars 2, it wasn’t any different.

“When you release an MMO, you have to understand that it’s hard to predict anything that’s going to happen. Everything happens at the same time. We just had to focus on getting everything right for our customers.” said O’Brien. “Then after you get through that first phase, actually even in that first phase, we were releasing new content into the world. Has it played out the way I thought it would? There’s lots of details, and the details are impossible to predict. In terms of the goal, the goal is exactly what I wanted for us right from the beginning.”

That goal was the living, breathing world of Tyria we know today. A world that feels alive. First ArenaNet started off with monthly content updates, all propelling Tyria and her people forward along their own story. But eventually Mike and the team knew this wasn’t enough. After a team restructure, they moved onto a two week update cycle.

“Anyone working on Guild Wars 2 is the kind of passionate gamer, and loves online worlds. We’re blessed that we can make a career making games like this. The stats blow me away: for every hour we spend developing content for Guild Wars 2, players spend 10,000 hours playing that content. It blows me away that we have that kind of power.” 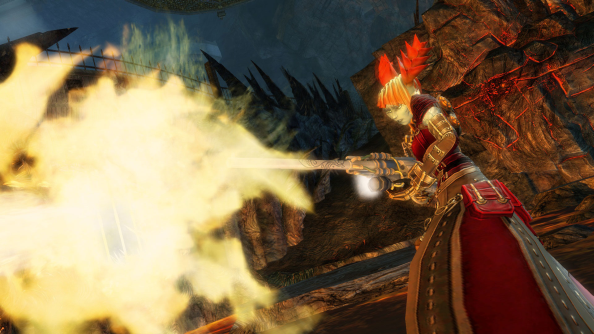 All of these content updates are free. ArenaNet still honor their unique business model of pay once and play forever. Most MMO companies would be readying their first expansion by now, but ArenaNet have rebelled. With only the initial sale and an in-game shop to keep them afloat, is it enough?

“We don’t need an expansion to pay the bills, and we’re not focused on an expansion right now. I won’t try and predict the future, maybe someday we will do one, maybe we won’t. But for now we are focused on the living world. We believe we can update the world and adapt the world in any way we want to through these bi-weekly updates.”

Speaking of their business model, ArenaNet remain one of the few developers employing it. With the recent revelations of both WildStar and The Elder Scrolls Online still requiring subscription fees to be played every month, are ArenaNet surprised at all no one has adopted their success?

“It’s funny because I was surprised seven years ago. We have a unique business model which we love, which sets Guild Wars 2 apart. It’s a real win-win situation with our customers. If no one follows us, then we have the business model all to ourselves, and I’ll take it.”

It’s going to be another interesting year for Guild Wars 2 and ArenaNet alike. With their bi-weekly schedule in full swing, time will tell if it works for both themselves and their customers. One can only wonder that a year from now, when we inevitably talk to Mike and his team again, how much the world of Tyria has changed.