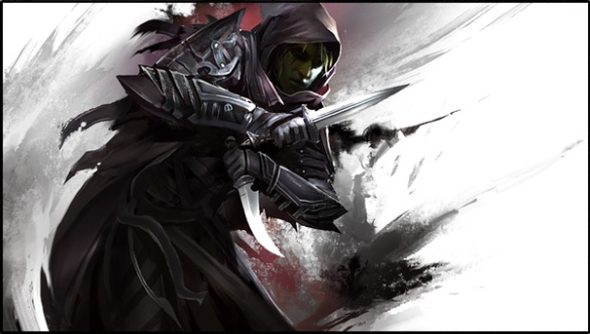 Guild Wars 2’s Thief feels obvious. He’s the rogue, the assassin, the guy who has a pair of daggers and sticks to the shadows before backstabbing his enemies for massive damage. You figure you know how he works, because you’ve played this class before in a dozen other MMOs, and countless RPGs. And, for the first five levels or so, Guild Wars 2 doesn’t do a lot to shake you of that feeling, provided you /did/ go the dual daggers route. You start with one anyway, so it feels natural enough. The dagger set is all about dealing massive damage up close, and staying mobile enough that you don’t get bogged down and slaughtered like the thieving scoundrel you are. Ah, actually that thieving part is different. Let me explain.

As with all of the classes, the really unique mechanics are tied to your F keys. With the thief, it’s just the first, and it lets you Shadowstep (teleport) to your opponent and steal their weapon. This gives you a one use item that depends entirely on who it was you stole from. Nick something off a Mao (giant ostrich thing) and you’ll get a clutch of feathers to throw in its face. Steal from a Centuar, however, and you might get an axe that lets you perform a dangerous whirlwind attack.
It’s a neat little thematic touch that has proper mechanical benefits, and makes you feel like a sneaky git every time you do it. All of your abilities are tied to Initiative, which you generate with your autoattack, or through different utility abilities, and then spend on your main abilities. And as long as you’ve got initiative, you can cast them constantly with barely any cooldown. The weapon abilities themselves have that same thematic bent to them, even though they tend to be more specific individually, and wildly varied from one another.
Grab a pair of pistols and you turn into a gunslinger, concerned wholly with standing your ground and unloading as much damage as possible before your targets get within ten feet of you. The only downside is that it’s the only thief set without any mobility powers, meaning you end up having to rely on your utility set to get away from those that would wish you harm.
Swap the offhand pistol to a knife, however, and your third ability becomes a combination of the two, letting you swipe at your enemy with your blade before Shadowstepping backwards to a safe distance to carry on blasting away. Even the first offhand dagger ability is a throwing knife that cripples, further increasing the time spent before any unsavoury sorts get within slashing range.
Swap those around though, so that your pistol is in your offhand and your knife in your main, and it becomes the opposite weapon set, with that third ability being a shot from your pistol that Shadowsteps you to your opponent so that you can start slashing away. Even the fifth ability, arguably your most powerful in any set, is a blinding shot that covers you and your surrounding opponents in smoke, making you almost impossible to hit.
You can also put a sword in your main hand, which seems to be geared almost entirely with PvP in mind with it being almost entirely about negative effects and locking down your opponents so that they can’t get away from your onslaught. With a knife in your offhand you get a flanking strike, letting you dash around the other player and keep them from locking you down, while with the pistol you get a pistol whip, which dazes the enemy and finishes them off with a brutal flurry.
And then there’s the shortbow, which turns the Thief into an AOE powerhouse. By far the most odd weapon set of the bunch, it’s entirely about area denial and powerful movement abilities. You’ve got a clusterbomb, which is an explosive arrow launched at a targeted area, and then detonated mid air to spread into a series of lesser explosions. The earlier you detonate it, the wider the spread.
Then you’ve got a cripple that dashes you backwards, putting valuable space between you and your opponent, followed by a poison cloud, which operates in much the same way as the clusterbomb but persists and poisons, and finally an Infiltrator’s Shot, which lets you Shadowstep to wherever you fire the arrow. Yeah, that’s a targeting blink. That’s going to be frustrating as all hell to play against in PvP. Quite brilliant, though.
It’s through the use of Initiative and position that the Thief really demonstrates the shift away from ability sequences that has dictated MMO combat for the past half decade. When so many of the skills are entirely reliant on outside context (Heartseeker doing damage based on how much health your opponent has lost, for instance), choosing which one to use right this second is much more important than just getting your chain off again and again. And with the Initiative cost of each ability being different, you have to decide whether to use this cheap ability now or wait a few seconds to use that big powerful ability then. Of course, by the time then comes around, you might be a Thief shaped smear on the boot of an angry Ent.
The Thief is all about mobility, rather than necessarily using stealth as a mechanic. It’s there, but it’s a tertiary effect, a temporary buff that’s going to get you out of a tight spot without being something you’re permanently in. You won’t be sneaking through dungeons, past all the mobs. Instead it’s far more about keeping your enemies from ever getting a proper lock on you, and dancing about the battlefield. With weapon swaps, you could even have something as focused as the two different Pistol/Knife combinations, so that you can leap into close quarters with the knife in your main hand, up until the point it starts to get hairy, before swapping your pistol into your main and getting out of the thick of it. Your strategies have to be as mobile as your feet.
It continues Guild Wars 2’s subversive bent, taking a genre trope and tweaking and twisting it into something just a little more unique. This isn’t the Rogue you’ve played before, but at the same time it’s not /not/ that Rogue. There are parts of the Thief that feel very familiar, but so much of it that feels completely new and refreshing. It all depends on how you play the game, and which way you decide to go. And if there’s anything to be excited about, it’s the choice to play the way you want to.