Hades has arrived late to the hell pit party that is 2018. That doesn’t seem to matter as it’s burning hot with brilliance. From the moment I saw it I knew I was looking at a strong contender for one of my favourite games of the year. I love how its combat is balanced on a knife edge: it wants you to dance and dodge across its beautiful environments before you deliver a meaty killing blow. But, fittingly, it’s always ready to punish your hubristic advances, too.

Hades treads new ground for developer Supergiant Games as a roguelike dungeon crawler. But not entirely. The combat and art style have been brought across from the studio’s 2014 hit, Transistor. However, the setting couldn’t be any further away from the tall towers of that game’s futuristic city – to get there we must descend way down into the Earth’s crust.

You play as the son of Hades, Zagreus, in his attempt to escape from Hell. The titular lord of the underworld himself isn’t best pleased with the prince’s attempts to flee. But, as with all Greek gods, Zagreus is immortal. All his father can do to stop him is place demonic obstacles in his way and laugh as his son is dragged home at the end of another unsuccessful run.

While Hades goes to some lengths to be as unhelpful as possible, Zagreus is helped on his way by a variety of Olympians. Nyx and Hypnos, the deities of night and sleep, offer moral support each time Zagreus descends to the hideous depths of Tartarus, while at the start of each run you’ll get a boon from a different divine figure. Aphrodite’s sheer beauty makes your foes weak, while the bloodlust of Ares afflicts your enemies with a curse that deals bonus damage shortly after your first attack lands. My favourite interaction so far is with Zeus, whose favour adds chain lighting to your special ability, or boosts your dash with a lightning-based area-of-effect attack.

At the start of each run, you have the opportunity to pick your weapon. A bow and arrow offers long-range damage, but makes you nearly useless at close range, while a divine shield can be ricocheted around the room like something out of an Avengers movie. No matter what weapon you choose, you have two other abilities at your disposal, allowing you to pick off enemies with your ‘Cast’ – a high-damage skillshot that only recharges when you kill your target – or quickly dash to get yourself out of trouble.

Hades is already a thrilling last-minute addition to 2018

Each weapon comes with its own set of attacks, but it’s the bonuses from the divine that really have an impact on your playstyle. An offering from Zeus might cause you to rely heavily on your special ability, but another might encourage a more up close and personal approach as you nip around enemies with an empowered dash.

Hades is an incredibly fast-paced roguelike, the speed made more noticeable due to positioning being just as important as the damage you deal. You soon learn to get behind an opponent to deal bonus ‘backstab’ damage. Forcing foes close to a wall allows you to get an extra hit in via a wall slam. But most important is dodging out of the way at the last second as it can cause enemies to walk on top of a spike trap.

There are plenty of ways to deal extra damage, but as with any good action game your movement in Hades opens up risks, too. I’ve already lost count of the number of times I’ve died by dashing out of the way of a monster only to be impaled by a floor trap I’d forgotten about. Thanks, dad. 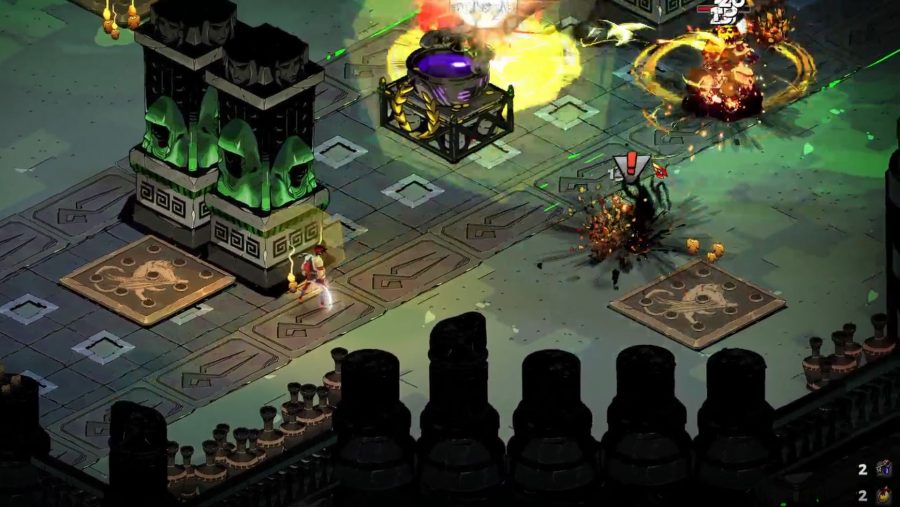 Zagreus can really pack a punch once you’re close enough to get some hits in. I’ve found the bow to be a little flimsy, but the sword, spear, and shield that are also on offer allow you to knock around monsters far bigger than yourself. Slamming through them with an empowered attack, or dashing past only to smack them into a collapsing pillar is constantly satisfying, as a string of damage numbers pop out and your enemy crumbles into dust. But Zagreus isn’t all that tanky, and standing still for a moment can quickly wreak havoc on your health bar. Chaining your beefier attacks together with your more delicate movement abilities is crucial. It’s gratifying to see how well these two sides of Zagreus complement each other.

The skirmishes in Hades are all pretty Transistor in how they play out, then, and it’s all to the game’s benefit. But the presentation is where the influence really shines. The backgrounds of each of the randomly generated rooms are filled with lost souls and decadent Grecian architecture rather than Transistor’s art-deco, but the combat effects pop with the same splashes of light and colour that made Supergiant’s previous titles such a joy to look at. Most of the gods ooze character, and while figures like Orpheus and Artemis are relatively reserved, the booming voices and cheeky grins of Zeus and Poseidon speak to their mischievous mythological roots. 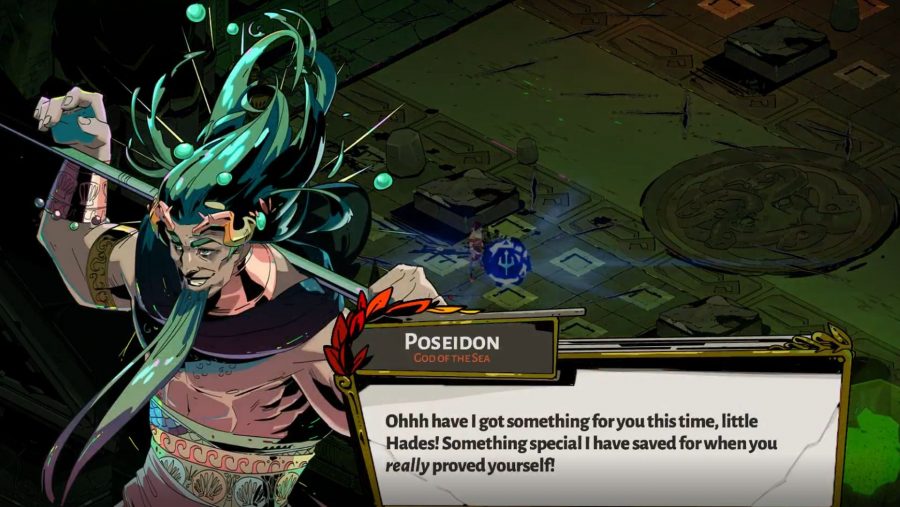 In its current form, however, Hades does have a major flaw. It’s not taken me long to work out an effective build to take me past its first boss, but I’m yet to reliably make it beyond the second room of the next stage of the game. Asphodel throws an awful lot at you. I’ve seen one new enemy and a few new environmental hazards, but the bigger issue is the quantity, rather than quality, of the monsters you’re facing. A character build that was good for clearing enemies at range and that felt powerful in close combat just moments earlier can wind up feeling weedy all of a sudden. While my journey through Tartarus feels well-balanced, Asphodel is a frustrating next step.

For now, I’m happy enough in the depths of Tartarus, but it’ll be interesting to see where Hades’ time in early access takes it. If you’re a fan of Supergiant’s other games, you’ll relish in finding traces of Bastion and Transistor nestled within its beautiful environments, every fight, and characterful reinterpretations of the gods. Despite still being in its early stages, Hades is already a thrilling last-minute addition to 2018’s sparkling indie roster and brings the underworld to life. So to speak.