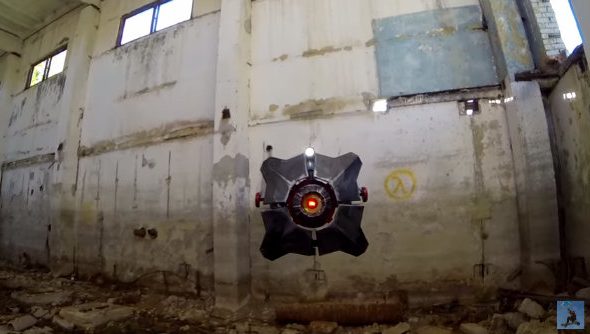 I’ve never wanted to hit something with a crowbar so bad in my life. Someone has created a fully functional version of Half-Life 2’s city scanner drones and it’s kind of terrifying.

Half-life 2 is a classic, but does it hold up as well as the rest of the titles in our list of the best old games?

When I first started watching this video I thought it was some sort of CGI trickery, it’s that good, but it’s clear later on that this is actually a real thing that someone made, which is incredibly impressive.

The contraption’s creator says they built the life-size replica from scratch and it measures in at 80cm x 55cm. It’s made from mostly carbon fiber and expanded polystyrene and can fly for a total of 11 minutes.

The video was shot with a GoPro camera and no special effects were used. Even the authentic, blinding city scanner camera flash is real, though the bulb quickly burned out, according to the inventor. Have a watch of it in action below:

The creator of this drone is now looking for suggestions on their next project, but they want it to be something even more “difficult and impossible” or they “have no interest”. “I really like when they say: ‘It will not fly!’ – ‘It’s not possible!'”

Sounds like a manhack is the next logical step.