Half-Life: Alyx sits under the crushing weight of impossible expectations. It’s the first new entry in a beloved series which left us on a cliffhanger a decade ago – a series that redefined PC gaming multiple times over. If that weren’t enough, it’s also shouldering the hopes of the virtual reality industry. Forget about a system seller: VR still needs a game that satisfies in the same way as a robust, traditional triple-A campaign.

Can Half-Life: Alyx live up to its promise as both a new Half-Life game and a full-scale VR experience? In short: yes. Alyx is at once conservative and quietly radical – a confident game that feels like the natural refinement of a genre we’ve been playing for years. Except, of course, ‘narrative-driven virtual-reality horror action shooter’ is not a widely explored space.

Alyx is as lengthy as a full Half-Life game, though smaller in scope. Your goal is set early on: take down a Combine weapon called the Vault. This remains the focus throughout the story, though your understanding of the nature of the Vault changes several times over the course of the adventure.

The around ten-hour campaign has you slowly make your way through a handful of city blocks filled with Combine soldiers and other alien entities toward that final goal. True to Half-Life’s traditional structure, most levels are built around a particular conceit. There are the darkened, horrific sewers where you’ve got to aim a gun and a torch with equal proficiency. A distillery where you have to distract a deadly, blind monster by throwing bottles against the wall. A ruined zoo, in which antlions swarm a Combine outpost.

Many chapters take place in the space of a single building, so don’t expect to find anything as sprawling as Half-Life 2’s vehicle stages in Alyx. But that limited scope allows the game to focus on the strengths of its switch to VR by ramping up the density and detail of small, familiar environments – the kind where you can peek around corners and under desks, or comb through drawers and shelves for supplies.

There's a frequent back-and-forth between Alyx and her guide, Russell, about the state of the world and what life was like before the Black Mesa incident. It walks the fine line between comedy and tragedy to feel like a perfect dialogue between real people staying hopeful in a dark situation.

A lot of Alyx is spent scrounging for ammo and items in these detailed environments, creating a vibe that sits somewhere between the intimate exploration of Gone Home and the frightening resource management of Resident Evil. It also ensures that you’re constantly rewarded for performing VR’s most engaging actions.

It’s tough to overstate how good it feels to simply rummage in Half-Life: Alyx. Yes, you’ve heard this so many times about VR – at this point, it’s a ‘See that mountain? You can go there’ cliché – but there’s an astounding sense that you have a physical presence in the world. Your hands are solid, which means that you’re not just interacting with predetermined objects in predetermined ways and either adding them to your inventory or putting them back down. It means you can brush messy shelves clean with the back of your hand. You can gently tip a box over to spill out the contents inside. All that fuss about Alyx’s absent arms seems especially silly once you slip on her high-tech gloves. 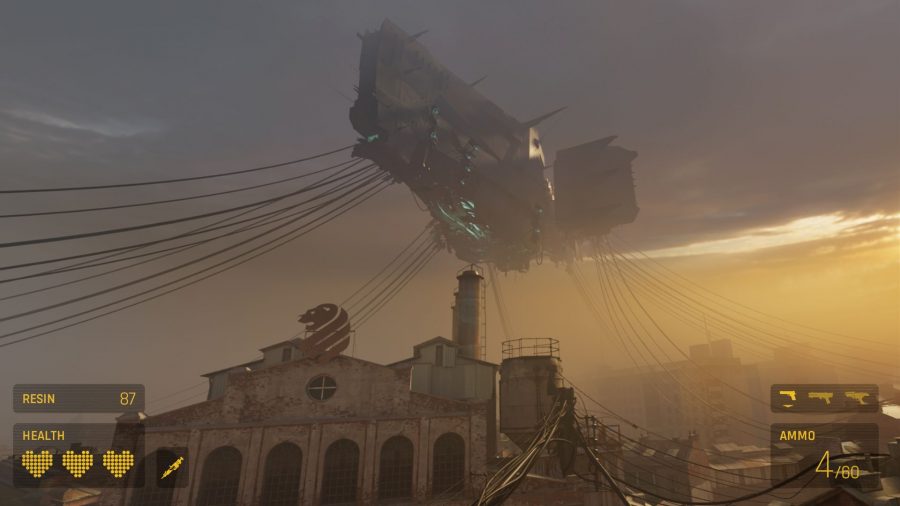 These sorts of interactions aren’t just gimmicks, either. When you cautiously nudge open a door with the barrel of your gun, or prod an unmoving headcrab to make sure it’s dead, or fling open a car door for a bit of cover in a gunfight, these little intangibles serve to ground you and make you feel like a part of the world. It’s the same sort of additive effect that the boom of Doom’s shotgun or the momentum of Mario’s run have had elsewhere, except now it’s building the magic of good game feel in VR. And yeah, of course you can catch a grenade in mid-air and toss it back at enemies.

Related: check out the best VR games on PC

The innovation of the Gravity Gloves adds further to this sense of tactility. Reach out toward an object and it’ll be highlighted with an orange glow – then hit a button, snap your hand back, and the object comes flying toward you. This lets you easily grab something off a distant shelf, or snap up a fallen magazine in the middle of a firefight. By the end of the game, you’ll be casually pulling grenades off of corpses, tossing them into throngs of enemies, ducking in and out of cover, and popping off a few headshots along the way. Yeah, sure, I’ve looked silly tumbling around my basement in a VR headset, but dammit, it feels so cool. 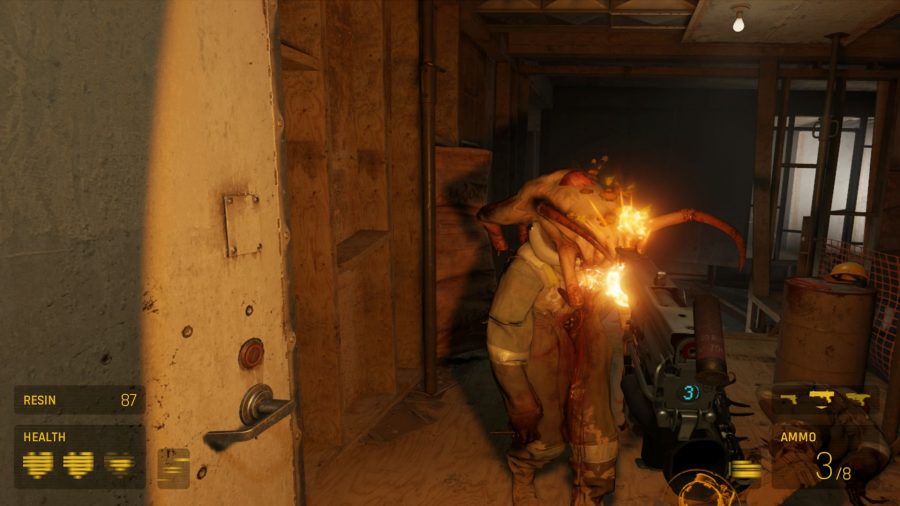 Yet the limitations of your physical presence mean that Alyx herself feels much more human and fragile than Gordan Freeman, equipped as he is with an HEV suit and massive arsenal of weapons. You’ve got to scrounge for ammo and stab yourself with healing syringes. You’ve got to huddle behind sandbags and peek out while enemies are reloading.

The game smartly loads up on horror levels early, and puts serious pressure on you while you’re learning the basics. To reload your pistol, for example, you eject a magazine, pull fresh ammo from over your shoulder, insert the new clip, and chamber the first round. It’s simple and natural, until you’re surrounded by headcrab zombies on all sides in a dark, cramped room.

I spent plenty of time in the early going accidentally bumping the eject switch when I meant to chamber a round, or fumbling and dropping magazines as I was getting swiped at by zombies. But none of this felt like a failing of the game. Instead, I was screwing up because I got too panicked to properly use my weapon. The natural evolution of your skill over the course of the game makes the final few encounters – when you’ve got your full arsenal and a massive variety of enemies to fight – even more satisfying. 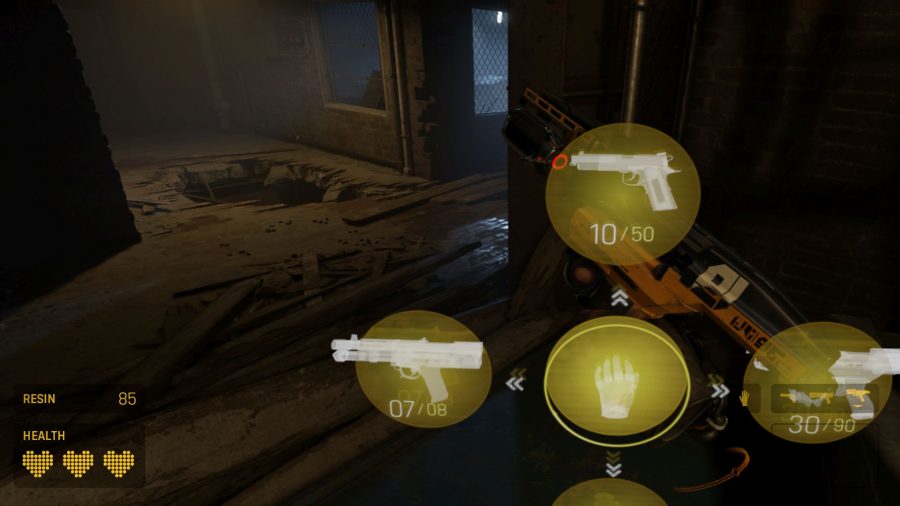 Those big combat encounters all demand the kind of strategic resource management and split-second tactical decisions that define the action of the best traditional shooters, too. Yes, Combine soldiers seem to move a little slower than they did in past Half-Life games, but they still move to flank you, cut off your escape options, and force you to fight proactively. You’ll always pick up enough ammo to have options, but not quite enough to let you lazily rely on a single trusty sidearm.

You only get three guns – a pistol, a shotgun, and an assault rifle – but these weapons comprise a smartly limited arsenal that doesn’t actually feel limited at all. Each gun has its place, and the small selection means it’s easy to both quickly switch between them in combat and to make sense of the ammo you’re collecting. You’ll also gather ‘resin’ to upgrade your guns with various attachments, from the pistol’s simple laser sight to an always satisfying grenade launcher for your shotgun. These are major upgrades that make your guns feel even more varied and offer some replay value, since it’s nigh impossible to get them all in a single playthrough.

As fast and stressful as the combat can be, all the VR motion options feel surprisingly well-equipped to deal with the challenges. You will get more detailed control with continuous movement – where you move with the analog stick – but if that option triggers motion sickness for you, the teleport is almost as capable. You always have access to teleport movement, since you need it for some light platforming, and I often found myself using it to quickly hop between cover points in combat, even after I adjusted to using continuous movement for most of the game. 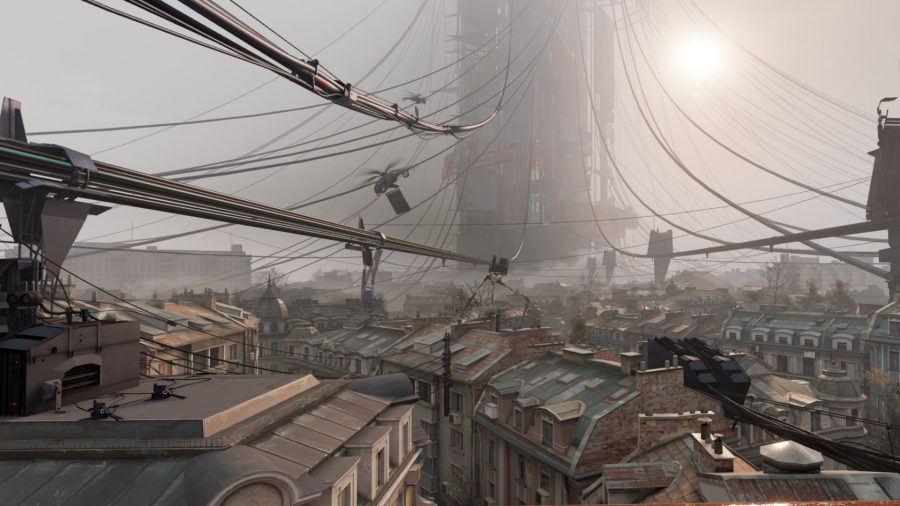 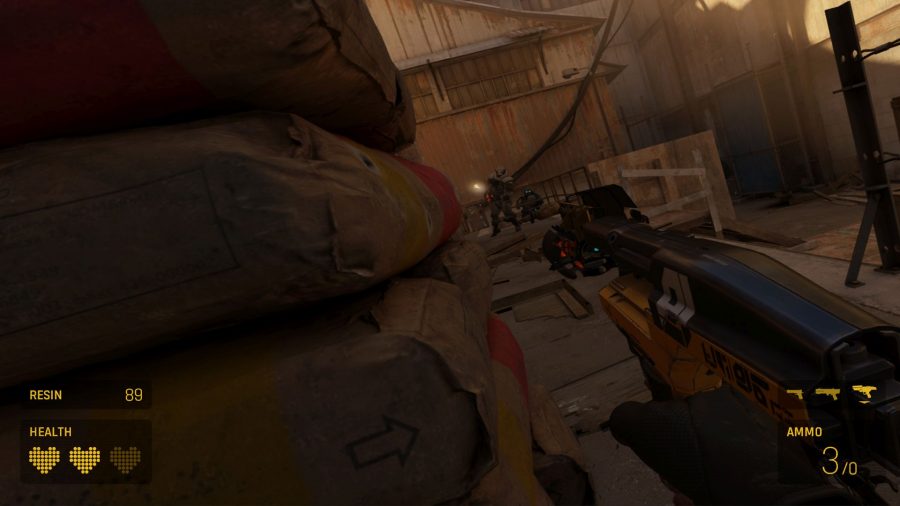 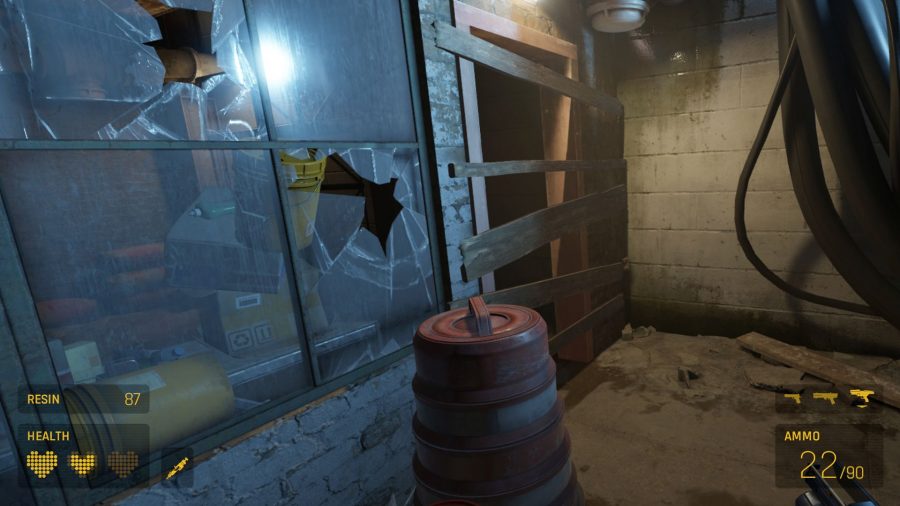 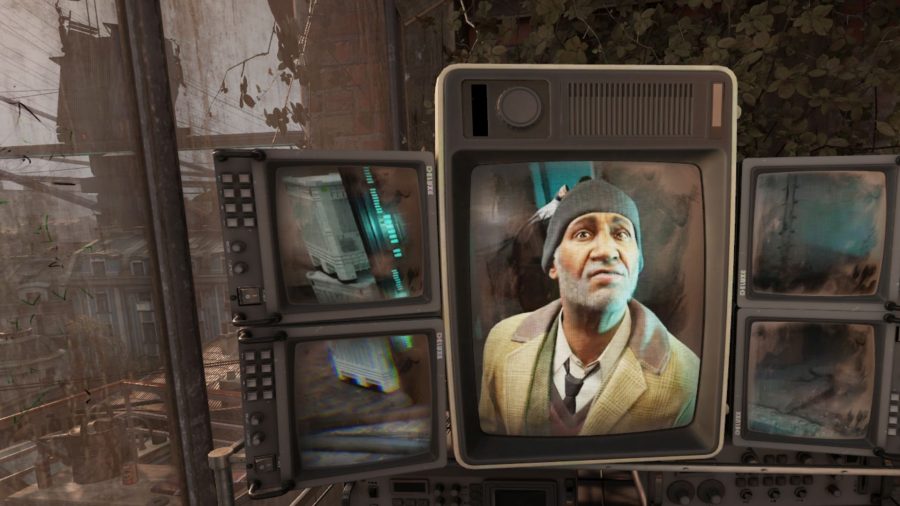 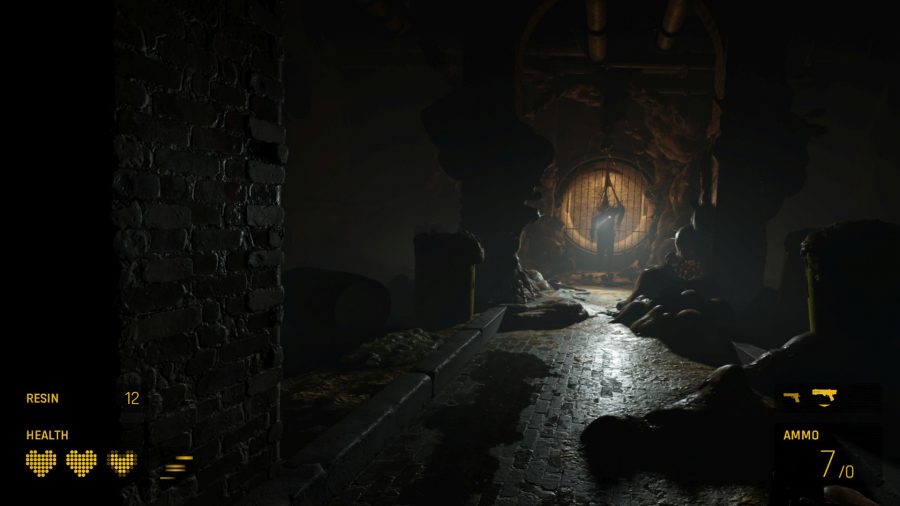 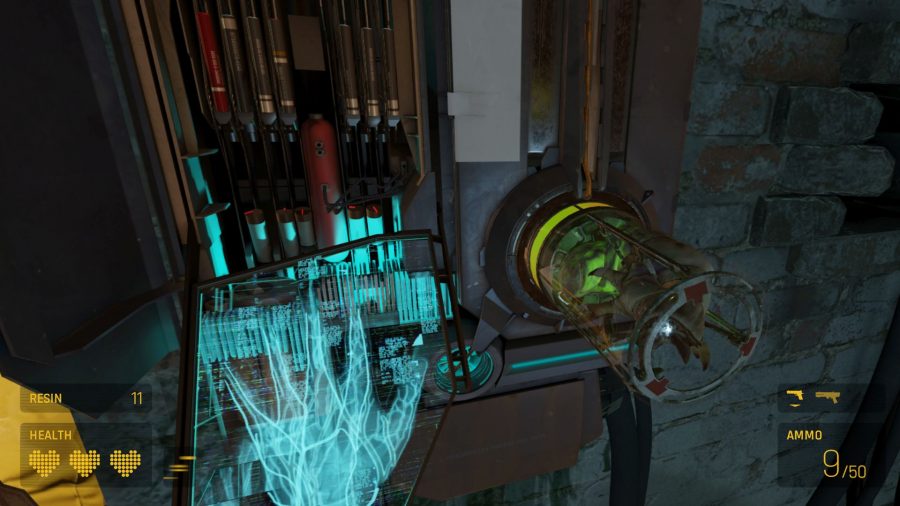 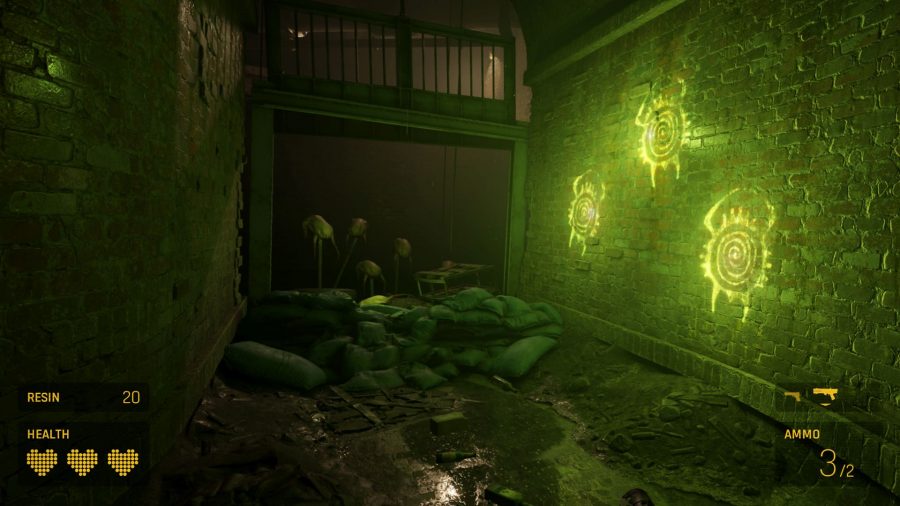 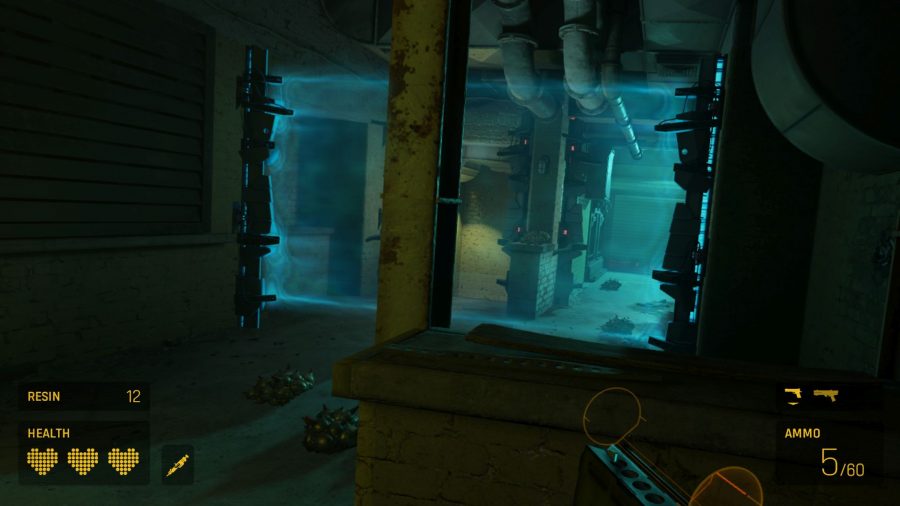 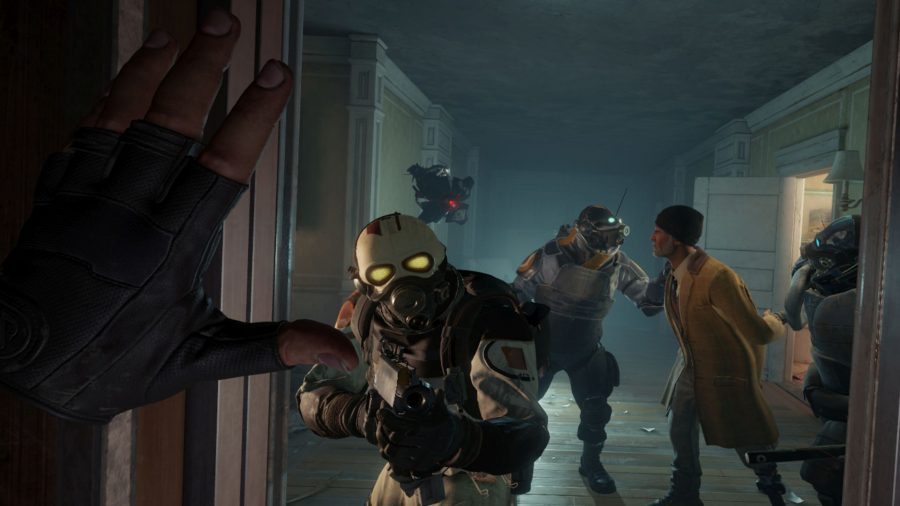 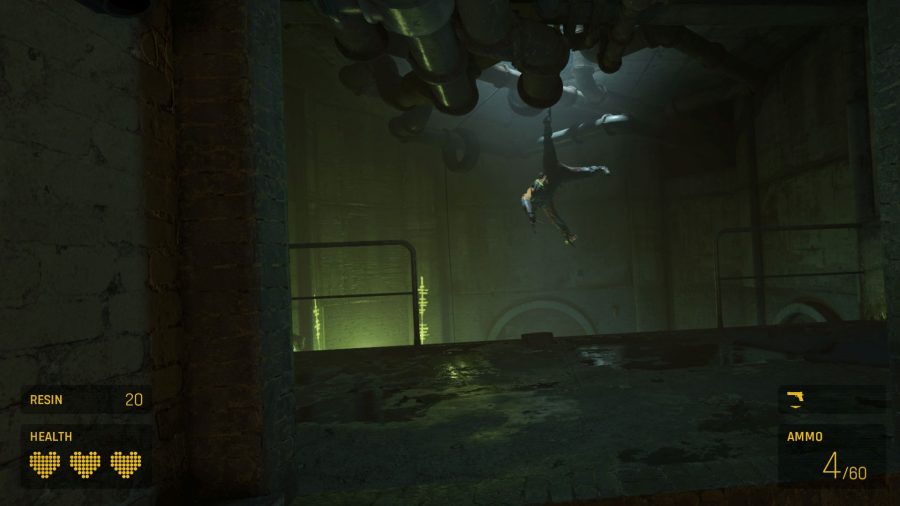 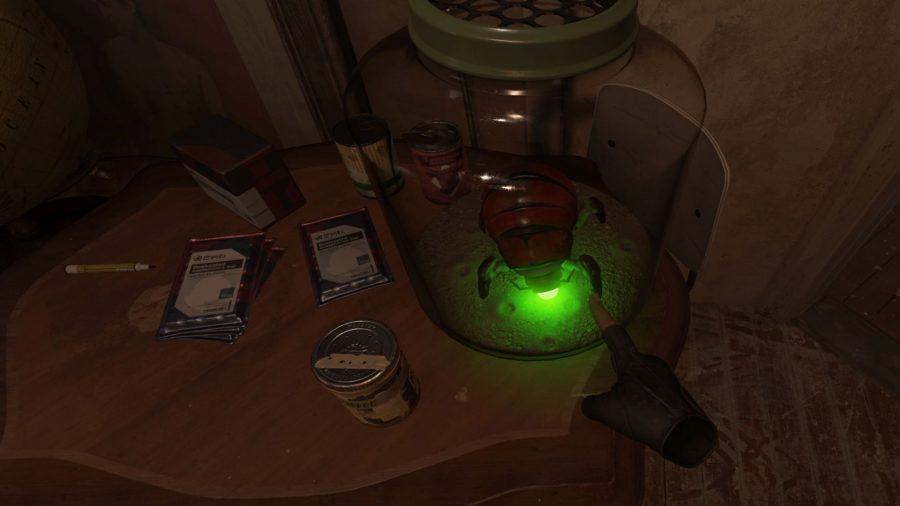 VR is still VR, and as much magic as the format adds to Alyx, the limitations are still there. It had been years since I spent any real time in VR when I fired up Alyx, and while I’ve generally got a strong stomach, my first few sessions with the game did trigger light headaches and nausea within an hour or two of play. If you’ve played VR before, you know how your body responds, and if you haven’t, you have to be aware that you will need to take your playtime slowly and with frequent breaks, especially early on.

It feels like Valve is grabbing you by the shoulders, screaming ‘we are going to make more Half-Life games!’

This was frustrating precisely because of how much I wanted to keep playing. In true Half-Life tradition, Alyx is a contiguous adventure with a somewhat plodding opening that slowly gains momentum until, by the end, it’s barrelling toward its climax with ever-more engaging mysteries and ever-more exciting set pieces.

Not everything moves at that pace, though, and the later chapters of the opening act in particular drag on for too long, with too much time spent fighting zombies and headcrabs in cramped corners and dark hallways. This is also where the hacking minigames are laid on thickest, and while they’re neat spatial puzzles in VR, they eventually become just as tiresome as they are in almost every other game – especially by the time you have to do two or three separate minigames to open a single locker that contains a couple of only marginally useful items.

Where it began: Half-Life is one of the best old games on PC

But any resultant frustration quickly fades, as the last few levels of Alyx are astounding – immensely creative as both a culmination of the game’s mechanics and a wildly varied presentation of new stuff. And while it’s probably impossible to satisfy nearly 13 years of expectations after the end of Episode Two, Alyx does its damnedest to open the Half-Life universe to new stories again. By the end, it feels like Valve is grabbing you by the shoulders, screaming ‘we are going to make more Half-Life games!’ It’s ever-so-slightly hammy, sure, but in a warm, endearing way that shows just the right amount of reverence to the stories that have come before.

Confidently serves as both a vindication for the magic VR can bring to gaming, and a satisfying new entry in the beloved Half-Life series.