There is a new Halo game on PC, and it’s a little bit what the hell. It’s not a first-person shooter or a strategy game, but an entirely new, developed from the ground up for Windows 8, twin-stick shooter. You play as ‘a Spartan’, fighting baddies from the top down. You’re meant to be playing within a simulator; reliving pitched battles for highscores and achievements.

Designed for Windows 8 is a weird thing to say. So here’s what it means: it is both a PC game and a mobile and tablet game. You can play it on a Windows Phone and a Windows PC, although you’ll have to buy the mobile and PC version separately. It uses mouse and keyboard, and touchscreen controls if you have a Windows 8 tablet.

It’s an almost parodical recreation of Halo, viewed from above. 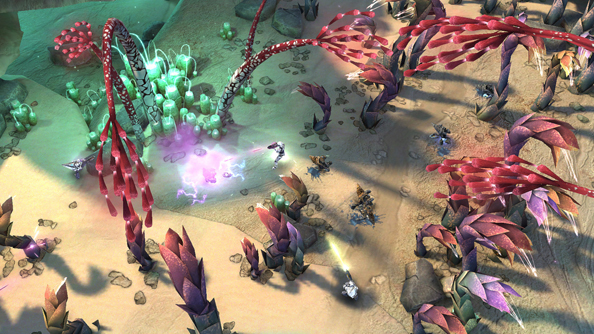 The same restrictions that make the first person games Halo are present: you can only carry two weapons at any one time, alongside grenades and an armour ability. There are plasma and frag grenades, and they carry the same effects: plasma grenades will stick and explode, frags will bounce.

Spartans can also punch baddies in the face, and where the level design demands it, they’ll ride vehicles and gun turrets.

It’s definitely a Halo game. But it’s not a very good Halo game.

For one: it’s almost absurdly simple. The thing I’ve always liked about twin-stick shooters is a sense of escalating chaos – the idea that you’re only just keeping a lid on waves of baddies. Spartan Assault never manages this: there just aren’t ever enough enemies on screen, nor do they ever feel particularly dangerous. 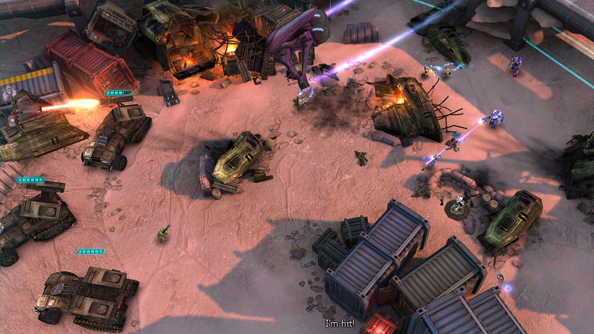 For another: it’s repetitive. Halo’s enemies were meant to be fought from ground level, not from space. Their behaviour patterns reflect that. They’ll walk and move to make them into interesting baddies. In Spartan Assault, they display the same behaviour, but it’s just not fun enough: an Elite is just a Grunt with a bigger health bar, and a Brute, when they finally appear, is just an Elite with an even bigger health bar. The one trick that makes you smile for two seconds is the idea of suicidal grunts: running towards you with twin grenades. Funny at first. Then boring. Then tear your eyes out depressing.

When it does get hard, it gets hard unfairly: killing you for unavoidable mistakes (getting out of your vehicle too close to another will instantly kill you) or because it just decides to place arbitrary checks in front of you – one mission in which you have to hammer down a set of doors while fighting off troops is arbitrarily tough because there just isn’t enough ammo to do the right amount of damage.

Missions are short (you can burn through most in five minutes or so), and to be fair, the game does try to mix them up. One mission might see you escorting snipers into position, the next driving a Covenant tank in an ambush. It’s the ambition of the Halo FPS games that allows for this variety; but Spartan Assault never capitalises on what Halo can do. There’s no sign of the Warthog, for instance, nor the Flood, nor any of the Promethean enemies that made their debut in Halo 4. You can’t play co-op, and there’s no competitive online mode. 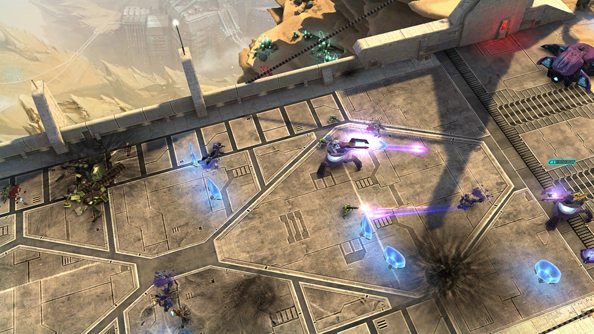 You can, however, compete for high scores, making the game slightly harder by applying ‘skulls’ to each level – the idea being that if you limit the ammo drops and remove your health, you might have a bit more fun. I tried. I didn’t.

It’s also willfully odd in places. The control scheme for the Scorpion Tank means you can only travel in straight or diagonal lines. There’s a baffling loadout system that lets you spend XP or actual real-life, honest-to-god-you-have-to-be-kidding-right, money, on new (and mostly pointless) items that are consumed each mission.

There’s no joypad support. On a twin stick shooter. Apparently it’s coming, but for goodness sake what year is this?

I wanted to make a joke here about how PC gamers can now look down on Halo and laugh, because we can now look at Halo from above. But that’s not very funny, and anyway, I don’t want to look down on Halo. Halo’s bloody brilliant, and Microsoft’s bizarre inability to get their shit together and sell it to PC gamers makes me truly sad. I’ve no idea why this exists, or why you would ever want to play it.

Basically, it’s a load of old gash. Don’t buy it.