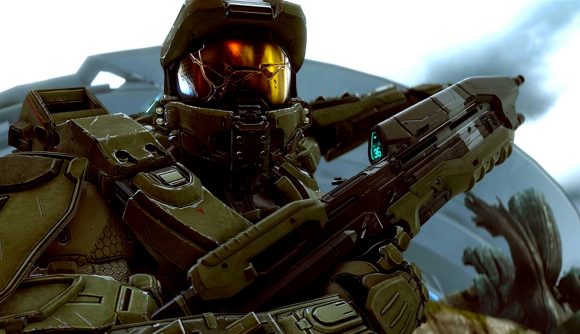 Showtime has announced American Gods and Orange is the New Black star Pablo Schreiber for its Halo TV series. According to Hollywood Reporter, the pick was the result of a worldwide casting search that also brought in some newcomers.

Schrieber played the infamous George ‘Pornostache’ Mendez, in Orange is the New Black, for which he was nominated for a Primetime Emmy. More recently, he’s known for his role as the Irish Mad Sweeney in American Gods.

However, it’s not known if Showtime’s Master Chief will retain the mystery of the video game character. The supersoldier has remained largely anonymous due to his spartan helmet, but fans will know who’s underneath in Showtime’s series either way.

Previously, executive producer Kiki Wolfkill told fans they shouldn’t necessarily expect the show to stick precisely to the dates, locations, or ethnicity of characters in the lore.

Speaking of lore, the show’s description pens it for the 26th century as humans battle the alien conclave. Showtime is promising “deeply drawn personal stories with action, adventure, and a richly imagined vision of the future.”

Joining Schrieber is Yerin Ha, who will see her TV debut as the newly created Quan Ah. The character is reportedly a shrewd 16-year old from the Outer Colonies who runs into Master Chief on his travels. Though Ha doesn’t have much experience on TV, Showtime was apparently impressed by her work on the Australian stage.

Kyle Killen was previously announced as the executive producer, showrunner, and writer for the series, joined by The Last Ship’s Steven Kane. It will be made in association with Microsoft’s 343 Industries, which spearheaded development after Bungie.

It’s not the first Halo TV series to air. It was beaten to the punch by 2012’s Halo 4: Forward Unto Dawn mini-series. That was followed shortly by 2014’s Halo: Nightfall, which didn’t leave a positive impression.

The significance of Showtime’s effort lies primarily in its budget and willingness to follow main characters. While previous attempts have shied away from favorites like Master Chief, Killen seems to be making him a focus.

Related: Everything we know about Halo on PC

Halo was penned for ten episodes on its announcement way back in 2014, but that has since been shortened to nine. Thankfully, it’s scheduled to enter production this year, and cast announcements are a good sign.