Hand of the Gods: Smite Tactics (formerly known by its subtitle alone) is the turn-based strategy card game set in the same universe as mythological MOBA Smite. It’s been in open beta since July, but only through its own website. Today, however, it comes to Steam Early Access.

Prefer to fight with cards than swords or guns? Check out the best card games on PC.

The Steam release comes shortly after a patch, which added clans, a deck tracker, and refinements to combat logs, in accordance with community feedback. It will also introduce a new starter pack, which contains a collection of seven core packs and a skin for Ra, the leader of the Egyptian pantheon. Further card packs can be earned through gameplay, or bought with real-money microtransactions.

Each of Hand of the Gods’ six pantheons offers a different playstyle, and developers Hi-Rez Studios expect to add a seventh to the game soon: the Hindu pantheon, led by Ganesha.

Hand of the Gods blends the deck-building and card play of CCGs with XCOM-esque turn-based strategy. It’s free-to-play, so if you’d like to give it a try, its shiny newSteam page is here. 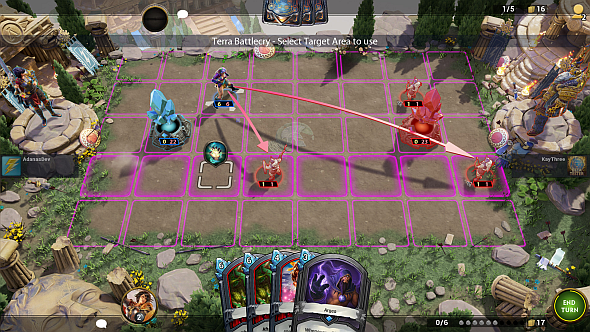 “Hand of the Gods has already attracted a passionate following, and we look forward to more players downloading Hand of the Gods for free through Steam,” says executive producer Scott Zier. “We’ve seen a variety of strategies emerge from the content we’ve released so far, and we are excited to see how players will use the new cards we are thinking up.”