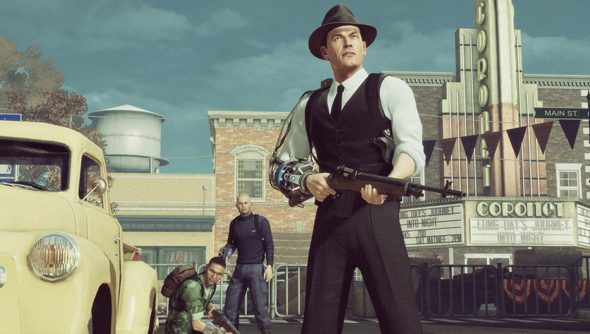 The Bureau is XCOM before it was XCOM, a secret government organisation borne of Cold War paranoia before an extraterrestrial threat saw it transformed into the alien-smushing global conspiracy it is today. Because it’s a kind of proto-XCOM group, they haven’t yet figured out that the best way to defend against sectoid invasions is isometrically, with both sides politely waiting their turn. Instead they do it over the shoulder and in real-time from a third-person, squad-based shooter perspective. Like savages.

I like to imagine that the familiar isometric view of contemporary XCOM is hidden at the very end of The Bureau’s tech tree (not that it has one), the missing link between this spin-off shooter and the classic strategy series. Maybe you find a document inside a crashed UFO with arcane references to Action Points and Reaction Shots, research it, and poof, you immediately leave behind notions of a ‘main character’ and start hovering godlike above the battlefield instead. That probably won’t happen, but it almost definitely should. 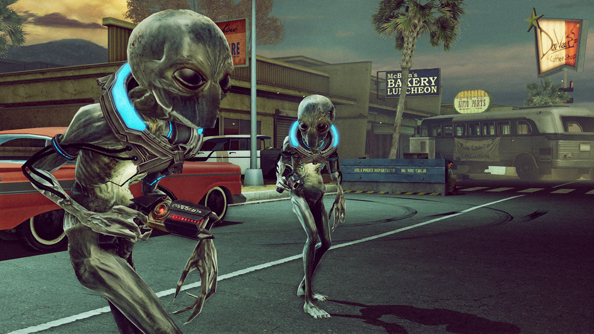 But there isn’t a tech tree, because The Bureau is something else entirely. The Bureau is set in the 60s, where you play as a sartorially accomplished agent investigating an alien incursion, which seems to have transformed a smalltown community into a swarming crowd of forgetful, muttering idiots. Some of them are stuck in revolving doors and giggling, others are sitting in their cars, unsure of which pedals do what, while most are just doing their best zombie impression in the middle of the road. It would be great fun, all this collective dementia, except we’re told that some of these humans are being used for extracurricular alien nastiness. They’re sleeper agents awaiting activation. Bums.

Even worse, the aliens themselves are hanging around too, jumping out from behind bins just as they do in the regular XCOM games. You’ve got your Sectoids and your Mutons, whom you fight with post-WW2 era human weapons, at least before the boys in the lab can adapt the enemy’s own laser submachine guns and plasma rifles to use against them. New species sit alongside the familiar conglomerate of subjugated species and mastermind brainiacs, such as the inky black sentient puddles seen in early trailers, as well as new versions of classic enemies. 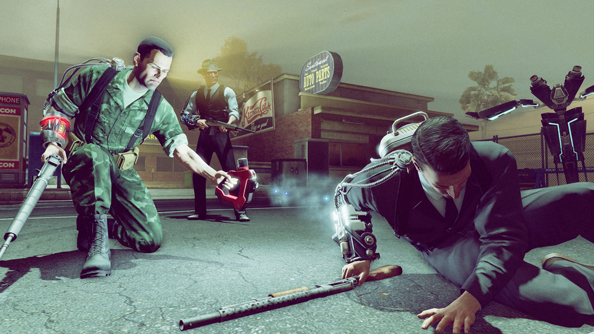 This is a squad shooter, with a largely linear series of campaign missions, and a set of optional side missions, to complete. You have two agents fighting alongside you, whom you may order to take cover behind picket fences and wrecked vintage cars (optimal cover is signified with the same shield icon from Enemy Unknown, which is a neat touch). Your squadmates can die, and if they’re not revived on the battlefield quickly enough they perish forever. On harder difficulties you won’t be able to replace a dead agent until completing the mission, but on every difficulty setting they remain punishingly permadead, and all of their valuable accrued skills and experience points will spill into the void. So there’s that.

The character you control, who is called something precisely as banal as William Carter, has ten levels to progress through, while regular agents have just five. Similarly to Enemy Unknown, upgrading an agent (or Carter himself) means making binary choices at each level to unlock a new ability for that agent, improving them in certain areas and leaving them deficient in others. You can rename them, customise them, send them on missions to level them up, give them new outfits and fit them with backpacks to bestow passive abilities. 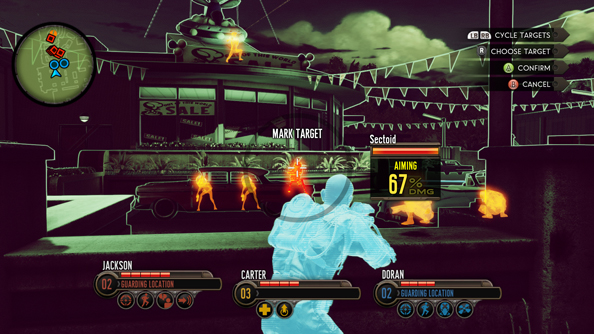 I didn’t play for long enough to know how much investment is needed to raise an agent to his top level, and so it’s hard to know how troublesome it is to lose one on the field, but your allies seem about as indispensable as they are in Enemy Unknown. They’ve got all sorts of magical abilities depending on their class type, either support, recon, engineer or commando. The engineer can conjure up an automatic turret and drop mines, while recon can taunt enemies, luring them into traps, or use a scatter grenade to disperse enemy groups and knock them out of cover. He can also use Force Push (it’s not called that, but it definitely is that) to send spindly sectoids tumbling comically backwards, grey arse over grey elbow.

Managing groups of enemies in The Bureau is a matter of finding the best cover while forcing the enemy out of theirs, and in the 45 minutes or so I played, the game managed to present combat encounters that encouraged a few different tactical approaches. There was the Tech Commander enemy, who can summon forth shields and turrets of his own. By ordering my ally to create a friendly turret nearby and then using my Lift ability to raise it off the ground, I could have the now hovering gun fire rounds over the enemy defences. As in Enemy Unknown, damage bonuses are gained when firing from higher ground, whether you’re a turret, an agent or an alien. 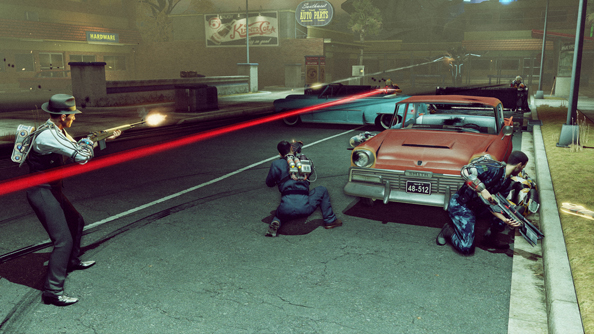 Powers can repeatedly and effectively be paired together like this. Another example, and a technique I abused throughout my time with the demo, utilises the engineer’s mines. These proximity triggered bombs can only be dropped with a certain radius of the engineer, but taunting an enemy will invariably cause them to stumble dumbly upon your ordinance like big alien idiots.The action is slowed to near-frozen when the skill wheel is brought up too, allowing you time to consider your next move, co-ordinate plans and order squadmates to focus fire on individual enemies.

The Bureau errs on the side of balls-out action, however. It’s less tactical than, say, the slow and thoughtful manoeuvring of the flank-happy Ghost Recon, where you fight for every inch of cover, instead being mostly reminiscent of the hands-dirty combat of the latter Mass Effect games. Your comrades can feel like human holsters for their skills, and whereas in Enemy Unknown an open tile represents mortal peril, The Bureau allows you to gleefully parade about in the open, soaking up plasma rounds and casually browsing for cover that you often don’t feel you really need. 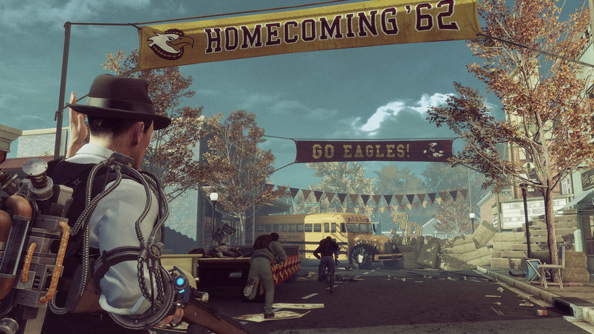 Ground gained by pummeling sectoids doesn’t feel particularly hard fought or well earned either, as it’s given up easily by the routed enemy. The positions of my squad weren’t especially important as long as they were in cover and near enough to fire off their abilities. I could order them to move individually if I wanted, but not once did I feel I had to. Of course, all of this could be mitigated by thumping up the difficulty level a few notches, and 2K Marin say they’re still manipulating the guts of the game to hit the right level of challenge versus alien-boshing larks.

Regardless of the depth of strategy being offered though, The Bureau’s mix-and-match tactics make it certainly fun to play, and firing familiar guns at familiar enemies in a chic 60s setting with nice hats is an obvious and simple pleasure. The success of Enemy Unknown has given 2K enough of a right to stick their noses right up the XCOM universe’s bum and take a big narrative sniff, and The Bureau’s ret-conned plot could very well end up being the carrot on the stick for series fans. Branching dialogue with key characters, and different outcomes depending on your choices as you play, suggest that some real thought has gone into this origin story.

That said, we can assume that Earth wins, because it’s still there, unmolested and mostly unaware of the existence of aliens by the time the first proper XCOM game starts. We can also assume that all of the plasma rifles and advanced technology we recover in The Bureau will fall into a giant hole at the end of the game, forcing us to research them from scratch come the isometric revolution.

Unless it’s actually based on this, in which case I’ve made a terrible mistake.