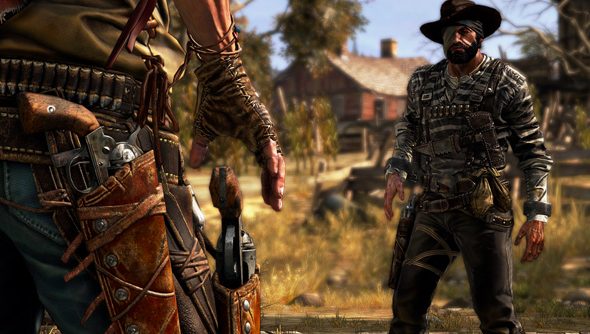 Capturing the spirit of the Old West in a first-person shooter is no easy thing, but Call of Juarez: Gunslinger has managed it. It’s not just about creating the look of the place – the dirt and the dust of frontier towns, the tired wooden buildings, the parched wilderness  – it’s also about the personality. This is a game of corrupt lawmen, quickdraw duels and some very tall tales. Gunslinger made of grit, grime and gunfights. It feels like an Old West shooter should.

Much of that comes from a comic book style that the game wears comfortably, like an old poncho slung about its shoulders. It suits the many, many frantic gunfights that it has no hesitation about throwing you into. Within moments of starting my first game, I was blasting my way around a weary old farmstead as dozens of sour-faced gunfighters tried to put an end to me. While they had the weight of numbers, I found I had an old trick up my sleeve: bullet time.

Gunslinger does bullet time well because it does it so economically. With a click of a button, the world slows down you have just a few moments to land my shots. This bullet time is very tightly rationed, which means it really matters, but it gives a vital edge in gunfights that are both challenging and relentless. It won me my way into the farmstead where, in the classic Old West style, I found myself under siege, grabbing a rifle and blasting from the windows.

Every kill scores experience points and these points are used to unlock new abilities. These range from the relatively unexciting, such as increased ammo capacity, to downright fantastic things like the chance to wield two pistols at once. Although the six shooter is a gunfighter’s best friend, there’s also the chance to get your calloused hands on weapons like shotguns, lever-action rifles and even dynamite. 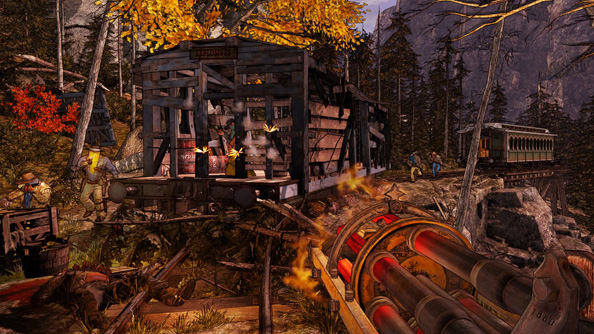 While you’ll quickly lose count of how many bandits you’ve blasted away, not every gunfight takes place behind barrels or from the top of a water tower. When the plot dictates it, I found myself facing down a foe in a classic quickdraw.

This places the camera just above the hip, where the six shooter hangs ready, and challenges you to be quick and deadly, but not too quick: in Gunslinger, the honourable gunfighter doesn’t draw first, but they always fire first. To ensure you aren’t shot down, you’ll be trying to keep your opponent in focus by hovering a sluggish, temperamental gunsight over them as they sidestep in front of you, sizing you up. This minigame really demands a steady hand but, if you’ve tracked your opponent’s movements well and built up enough focus, when the time comes you should be able to draw faster and score and honourable kill. Still, if you don’t fancy your chances, you can throw reputation to the wind and simply draw.

After winning my first standoff this way, the game gently corrected its plot for me. Apparently, it said, things didn’t really turn out that way, and this is a theme that runs throughout Gunslinger. The game’s narrated by the protagonist and represents his reflections of his adventures out west, but corrections and omissions alter the plot on the fly. An attack by bandits suddenly becomes an Indian ambush as our aging protagonist sets his facts straight. It’s a very neat take on storytelling and helps to keep the game unpredictable. 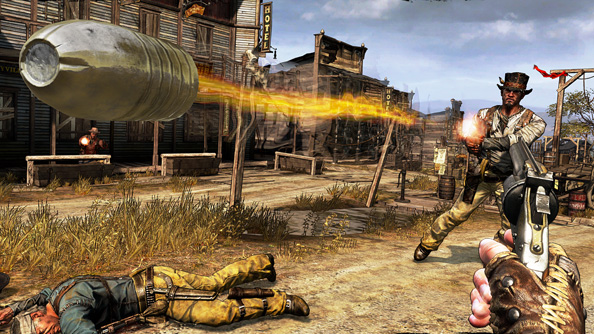 As well as a main plot that weaves its way about the old west, with cameos from (or tips of the cowboy hat toward) such figures as Pat Garrett and Billy the Kid, Gunslinger also has its arcade modes. One is a chance to replay every quickdraw, scoring the fastest kills that you can, while the another is the gunfighter’s equivalent to the time trial. It presents levels packed with enemies and challenges you to shoot your way through them as speedily and as accurately as you can. It’s nothing more than a wild west corridor shooter, packed with exploding barrels and hordes of bad guys, but it’s quick, easy and a lot of fun.

It looks like Gunslinger is going to give you a lot of bang for your buck and while it’s not a shooter that pushes the boundaries of the genre or introduces anything that’s particularly original, it’s nevertheless shaping up to be very cool and very enjoyable. It’s time to polish those spurs again.

Call of Juarez: Gunslinger is currently available to pre-order.