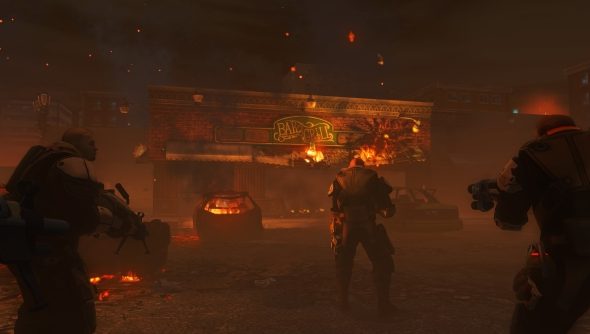 Firaxis’ X-com tutorial is a statement of intent. By the end of it, your four man squad has been whittled down to one panicked novice and a bunch of ruptured human and sectoid corpses. It turns out rookies are fragile! And also totally disposable, as we load the solitary survivor and a bunch of bodies into the Skyranger. It’s also worth noting that our later demo also featured a massacre, this time of relatively high-level soldiers, albeit with standard equipment. Simply put, the standard baddies are lethal enough to make your life an absolutely effing misery – and the lives of our troopers particularly short. Stepping up to handling terror missions correctly is going to be a real challenge.

The game starts with meteors raining from space in urban Berlin; meteors that reveal metallic pods at their centres and which start emanating bile-coloured streamers of energy. These streamers wrap themselves around civilians and drag them towards the pods…Your team lands on the ground, here to tackle the pods and find a missing German Specs op team. The pods now seem dormant, though they’re surrounded by the webbed bodies of people – alive or dead, you can’t tell. The spec ops, you find rather quickly; one lies trapped under a bus, skinned; another has been eviscerated from the inside. Spec Ops: the Line eat your heart out. Looking quickly at your team, they’re quite stylised. The men are physically distinctive depending on what role they take (a heavy, for example, is heavily built; the women, sadly, less so.) There’s a cartoony element to them, but subtly so, with a little of the style of Firaxis’s Civilization: Revolution creeping in around the edges.
The final spec ops soldier is mumbling over the radio to you as you enter a town hall and standing with his face in shadow, holding a grenade to his chest. One of your men approaches and tilts a light to the soldier’s eyes; they’re a bright sky-blue, the same as those of the Sectoid commander hiding in the shadows. Before your man can react, the soldier has pulled the pin on his grenade and you’re a man down.

Another man dies a second later, as he’s flanked by a sectoid. A third gets a shot off, killing one of the scuttling greys, before plasma bolts splatter against her head. Your final soldier manages to finish off the remaining two enemies, and reports back to base. Mission: success. Pyhrric, but a success. Then it’s back to base for debriefing. The next two missions also fit into the tutorial structure, but are so neatly integrated with introductions to your key characters and the base’s key facilities. The base is a neat side-on structure, reminiscent of a 2D platformer; because of the magic of depth of field, as you move around, you can see into every facility, watching the troops train or the machines in the engineering department pounding away.

Each area has several functions; for example, the manufacturing facility can not only make the stuff you’ve researched, but also sell it on the grey market. The barracks lets you train soldiers, equip them and level them up (we level up the survivor, who turns out to be a heavy and can now carry a rocket-launcher). The command area lets you launch satellites, to monitor areas, as well as seeing how far each country is towards abandoning the Xcom project, and monitoring the juicily-named ‘Doom Tracker’. Each area has an associated head of department, who provide a social aspect to the game.

Selecting the location of your primary base gives you different advantages: North America gives you bonuses to aircraft. Europe gives bonuses to the speed of your labs and workshops. Asia reduces the cost of your foundries and training projects by 50%. South America means that autopsies and interrogations are instantly completed (what are they saying about South America?!). Finally, Africa straightforwardly increases your funding by 25%. We try another couple of missions, with mixed success; no-one gets killed, but our solitary heavy is wounded and has to spend a month in sick bay. We have to make some horrible choices, as often the aliens attack in two places at once and we have a single Skyranger (at present). The council, who are managing Xcom, are extremely creepy, only speaking from the shadows and giving us bonus missions to the usual alien incursions.
The demo ends with a particularly strange element, which we don’t get to play. A mid-ranking squad is introduced to the Chrysalids, the game’s iconic terror monsters (link), before being rapidly eviscerated until, again, just one is left. It’s something we feel you’re going to have to get used to in Xcom – losing men and running away. So, the developer cheats a little bit(what he later calls “demo magic”), dispatching the “reaper” squad. Now, you’re not going to be allowed reinforcements in the final game, but this squad is a bit special, showing off possible end-game units. One is an Archangel (flying) armour-equipped sniper with a plasma rifle. Another is an assault specialist with cloaking Skeleton armour, that allows her to flank enemies with ease. And the final one is… Sid Meier. A super-psychic Sid Meier. In an uncomfortably tight body suit.
The team makes short work of two Chrysalids, a Sectoid Commander and a Berserker before Sid forces a Heavy Floater to commit grenade-suicide. But, lo, what is that? A great sound in the distance… the survivors cluster together, but not too near Sid’s skintight body armour. Looming out of the mist are two great lights above which a single light glows. There was one unit from the original Xcom which was tougher than almost anything else and this is it… the Sectopod.
Playing this, my heart just swelled. Firaxis have _nailed_ this. They have mingled the emergent stories of the original with solid personal storytelling; they’ve crossbred the hardcore combat with the progressive feeling of power as your characters and technologies advance, but still with an awareness of their vulnerability. And they’ve recaptured that feeling of terror that defined the original Xcom, without just copying it. Could this be the best remake of all time? Time will tell.