Heeyyyy guuuyyysss, there’s a problem with my Splinter Cell preview, in that I became extremely nauseous while playing it and had to stop to go throw up. That’s not a comment on the quality of the game, I’m simply saying that my body decided to stop functioning normally during the preview event, forcing me to at one point climb behind a projector screen showing Sam Fisher’s face to find somewhere else to put the contents of my stomach.

Everything after that is a diseased blur, an extended memory smear that consumed the rest of that day. So I don’t really have a proper Splinter Cell: Blacklist preview, sorry.

Maybe it was the heat. Ubisoft were demonstrating the game in a furnace-shaped cellar in Farringdon that had been decorated to look like the inside of an aeroplane, where two dozen Xbox 360s and the combined body heat of one thousand games journalists were hard at work terraforming the venue into an equatorial armpit. It was hot. It was as if somebody had managed to construct an arcade inside of a human anus. The concave ceilings and red lighting furthered the impression that we were all trapped inside a giant, suffocating colon.

Ubisoft were very helpful and apologetic and nice to me when they saw that I was in distress, and the other attendees didn’t seem to be struggling quite so much in the heat. Well, they didn’t seem to be struggling at all, instead they just nodded politely when I tugged at my collar and said things like “jeez Louise, is it hot in here?” and “imagine if this is where we die, if this is our tomb”, which suggests that some awful biological things had started to go wrong inside my own body shortly before I stepped foot in the venue. That is to say that Ubisoft are not liable for my near death experience. Neither was it their fault when I had to go stand outside and stare at a cloud because I thought I might faint.

I left the event early to go home to bed, where I slept for 16 hours before slithering off to a hospital all caked in disease. Perhaps I have a deficiency of something (I can’t remember the last time I ate, for example, a plum), perhaps my skull is rejecting my brain, perhaps I’m part of a Splinter Cell ARG and I’ve been shot with a polonium dart. Whatever is happening to me, I’ve been given loads of medication and now I really can’t remember much of what I played of Splinter Cell: Blacklist.

But because I am a consummate professional, I’m going to remember it to the best of my ability. Here are the things I think I learned about Splinter Cell: Blacklist while I was technically not mentally capable of doing my job. I also forgot to pick up a press kit on my way out, so I’ve had to illustrate all of these points myself in MS Paint.

Sam Fisher lives inside an aeroplane with his friends now 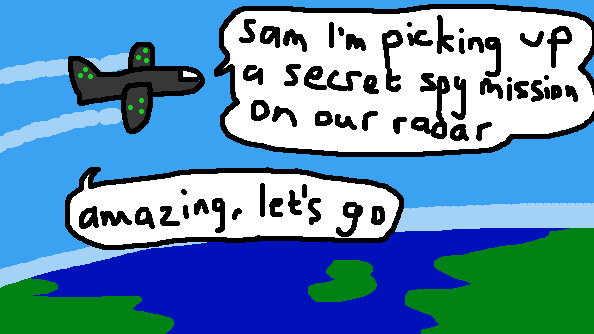 After each mission, Sam Fisher appears inside an aeroplane with his friends. This aeroplane is the new Fourth Echelon in the sky. His friends include Grimsdottir, the no-nonsense mission giving woman, Griggs, the co-op character man with a badly modelled 3D face and, according to my notes, a “sarcastic nerd character”, a comms hacking comedy hack.

This team of super spies flies around the globe in their aeroplane solving crimes and having fun adventures. Their plane is equipped with a giant iPad in the middle, which Sam can play with to pick his next mission (either a co-op one or main campaign one). There’s also a neato cordless telephone that Sam can use to call his daughter. Here’s one of those conversations, transcribed from memory (I forget the name of the daughter, but I’ve written around it):

Sam: “Daughter, are you there? It’s me, dad.”
Daughter: “Dad where are you, there’s a terrorism on the news.”
Sam: “You know I can’t talk about that, girlio.”
Daughter: “Just promise me that you’re safe, father.”
Sam: “Of course I’m safe, you.”
Daughter: “I miss mom.”
Sam: “I do too, Ladyface McGroo.”
Daughter: “Dad I have to go for some very mundane and domestic reason like a prom or something that contrasts starkly with the gravity of your next perilous mission.”
Sam: “Okay, I’m going to go upgrade my plane which gives me new abilities in missions — oops, that’s classified. Me and my big mouth, haha.”
Daughter: “ROFL, dad!!”
Sam: “:)” 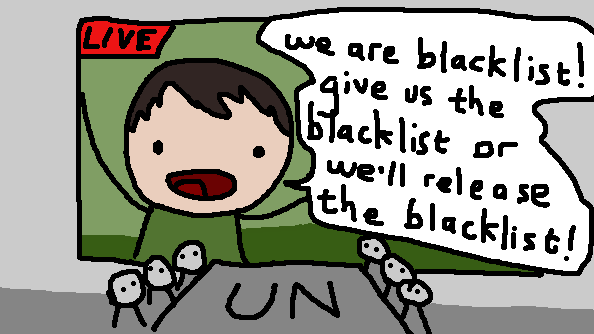 The game begins with Sam Fisher and another army man either infiltrating into (or exfiltrating out of) an army base that has just been attacked and blown up by terrorists. At first it’s difficult to know which of the two men in the cutscene is Sam Fisher, because it’s dark and I think they’ve changed the actor, but once the cutscene ends the camera swings behind one of the men and then you know, you know that the man with the camera pointed at the back of his head is Sam Fisher.

After that, there’s a really tricky forced stealth section in which you sneak behind some men firing their guns into the sky, and then there’s another cutscene that I can’t remember. I think Sam Fisher gets blown up. This whole sequence might even have been a flash forward. It was around this point that I left to throw up. Again, I must stress that it was not the game’s fault that my bowels were all convulsing and rotten.

After I washed my hands I saw a cutscene in which the terrorists give their sole demand: the withdrawal of all American troops from everywhere across the globe. If the United States do not comply, goes the threat, the terrorists will do one bit of terrorism every seven days. They worded it more scarily than that, obviously, but you get the idea. It’s like a Steam Summer Sale except with bombs in shopping centres. Frustratingly, I can’t quite remember how the titular list ties into any of this: either the terrorists want the Blacklist, or they have the Blacklist and are threatening to use it. Maybe the terrorists are called Blacklist. It’s definitely one (or some) of those three.

You can dress up Sam in different clothes before missions 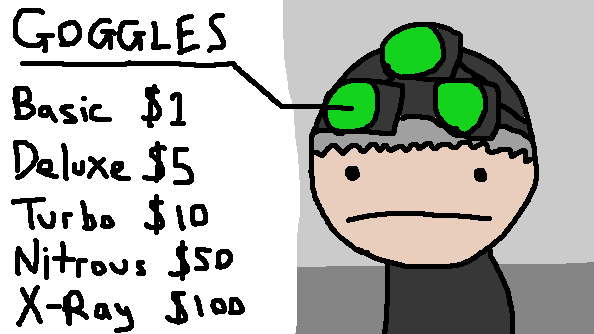 I have no idea what different outfits do, but there were four or five bars that went up and down depending on what trousers you put on. It’s not just trousers you can customise either: you can have different tops, different hats, possibly even different kneepads and belts. You can unlock a creepy gas mask that reminds me very much of STALKER. My educated guess is that those bars that change with outfits included things like ‘stealth’ and ‘accuracy’. The goggles could be upgraded to see through walls too, and one of the developers definitely said that your custom loadouts could be used in multiplayer. 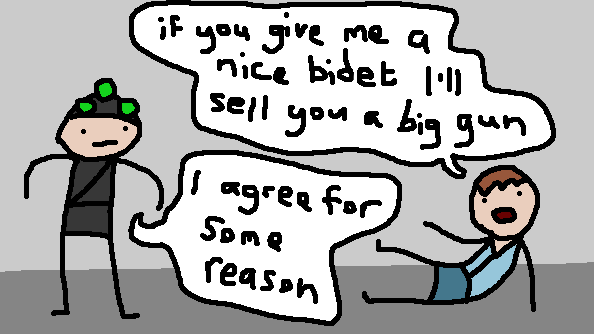 I’ve played all of the Splinter Cell games, but I couldn’t tell you the name of the arms dealer who pretended to murder Sam Fisher’s daughter in order to blackmail him into doing the splits near some top secret evidence in the third game. Whatever face I was supposed to make when it was revealed that this man is now connected with the terrorists, I wasn’t making it. The face I was making was pallid, faintly translucent, and amphibiously shiny. Like a newt’s belly. It was a face that wanted to be sick all over the weapon select screen. Again, this was not a reaction to the game. I stress that I was not disgusted by the evidently forgettable, Tom Clancy-penned (hahaha) plot of the previous games. I was very ill.

Anyway, you capture this arms dealer and he agrees to sell you new guns. He has his own holding cell on the plane, which you can upgrade to convince him to sell you even better guns. Because videogames.

The asymmetric spies versus mercs multiplayer mode is back 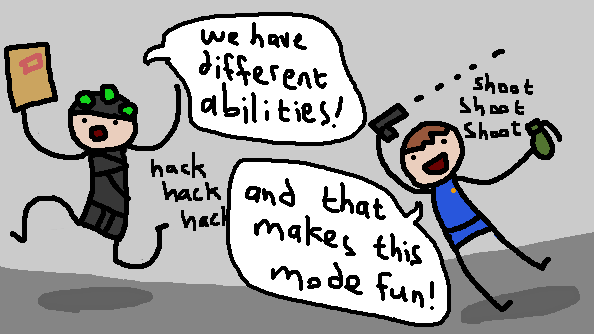 And there’s a map set inside the Large Hadron Collider, or something that looks a lot like it. The spies crawl about in their sneaking suits in third person, turning invisible and slinking through vents in their efforts to hack security terminals. They’re soft and brittle, but deadly at close range and boasting high situational awareness thanks to their advantageously angled floating cameras. The mercs are gun-wielding and locked into first person shooter mode, easily capable of shredding a spy on sight but hampered by their narrow field of vision and relatively pedestrian gait.

I remember enjoying this part of the game the most. It was the part of the game during which the toxic pressure behind my eyeballs lessened and the vice-like crushing of temples briefly abated. It was during this momentary respite from what genuinely felt like the grasping, bone-dry hands of my dead ancestors pulling me into the grave that I finally left the Splinter Cell preview event, fearing that, had I stayed any longer, I would become mentally incapable of navigating my way out of the aeroplane-themed hole.

I remember walking towards the tube station, thinking about Sam Fisher and wondering if I was going to die.