WildStar! It’s a fresh, shiny new MMO from Carbine, a studio with more Blizzard DNA in them than a spunked-up igloo. Of course, the Blizzard spore cloud has spawned studios and games far and wide, but more so than most WildStar’s heritage gives it an undeniable look, taste and feel that will be faintly familiar to WoW players. It brings its own distinct personality to the MMO party however, with a beautifully rendered comic-style that’s intensely art-driven and retina pleasing. WildStar is a devastatingly handsome game, with grand vistas and richly detailed everythings and hoverboards.

I’ve been playing the WildStar winter beta ahead of the full launch next year, so here are just some of the things I immediately liked about it. 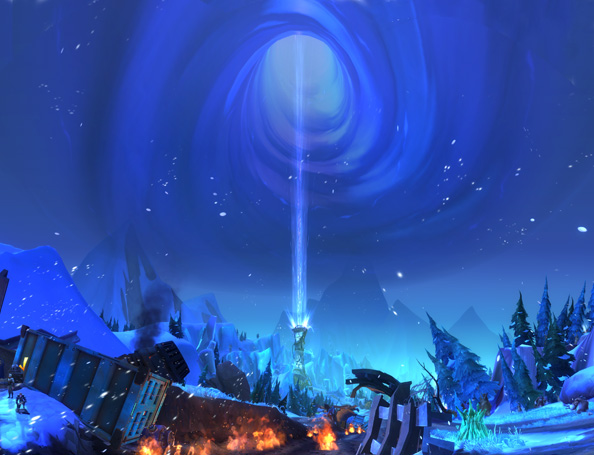 You have a career to suit your playstyle

As well as choosing your Race and your Class, you’ll also get to choose a Path, sort of like a second job to think about while you play video games. Choose between Soldier, Explorer, Scientist and Settler and you’ll start discovering Path specific quests popping up all around you. Depending on your Path, your quests will be markedly different. The Soldier gets things like assassination, demolition and defensive missions, whereas the Scientist gets his own Scanbot capable of analysing the surroundings and gathering data. The Explorer’s Path missions revolve around discovering new locations and trekking to hard to reach spots on the map, and the Settler must build hospitals and deliver supply crates wherever he goes. You’ll also get special gear for completing these Path quests.

This essentially transforms, in some small way, every area of the game depending on the Path you choose. Characters with different Paths have different experiences and motivations as they play, and will scurry off towards different bits of the map in order to appease their ever-visible Path questbox, which glows a very important shade of blue. That said, I mostly played as a Scientist, and was sick to my back teeth of scanning hovering crystals by the end of my first hour. What could be so amazing about hovering crystals that you’d need to scan every one you come across? Scan one and move on, Scanbot. 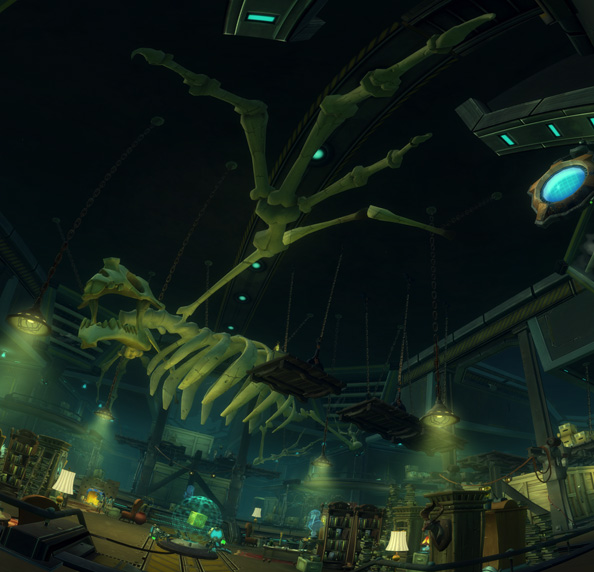 It is incredibly pretty

It’s been a while since I’ve played an MMO in which, when walking into a new room, I haven’t immediately assumed I knew what the ceiling would look like. WildStar has very interesting ceilings and skies. In one opening area, the sky is filled with a great glowing green spear of light, jutting upwards into an inverted and tumultuous whirlpool of swirling black clouds as spacecraft rocket overhead and bolts of lightning split the air. Indoors, vast glass domes are decorated with banners and pendants. There’s a cavernous plant nursury populated by cute little sentient celery creatures, into which a building-sized meteor has crashed. That sort of thing.

The game’s sci-fi fantasy setting seems to consciously sidestep artistic tropes wherever it can, showing you things that you can’t help but stop and screenshot, while drawing on design techniques that predate video games. Namely, zones all adhere to their own shape guides that dictate how the fundamental primitives of objects should be drawn. That is to say, some areas are pointy, others are squiggly, or blobby. In effect this drapes a layer of visual character over the different regions, demarcating them and letting you know in no uncertain terms that you’re standing in a new bit of the game. Excellent. 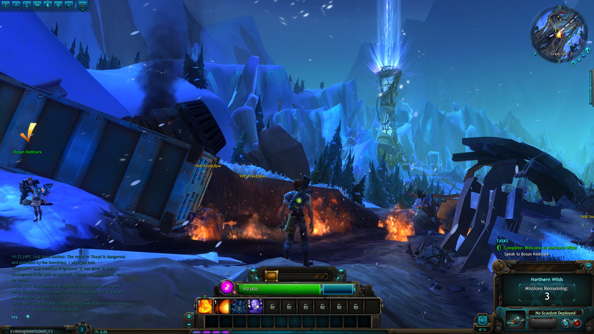 It doesn’t hang around

By which I mean WildStar doesn’t squeeze its money’s worth out of every zone by piling it high with quests that demand that you run around in circles in the same location carrying out barely distinguishable jobs. Instead (at least early in the game) it tends to march you through areas from point to point, with no grinding, collecting quests that can be completed en route to the next town or camp. When the quest designdoes loop back on itself, it more often than not has a small hub area from which you’ll strut off in a new direction to fight and adventure in an undiscovered portion of the map. Either way, you’re always progressing into new environments, hoovering up quests as you go and encountering resistance but not artificial roadblocks. WildStar’s world is huge and detailed, and Carbine aren’t afraid to show you giant sections of it very shortly after your first create a character.

And while the game is turgid with lore, quest givers will only ever burden you with a sentence or two of flavour text. You’ve got the option to probe deeper into the whys and whoms of their requests, but if your goal is to smack things for XP the designers have taken every effort to not get in your way. There’s a lore button on screen if you care for that sort of thing though, with lots to read up on. But be warned, Carbine have madeall of it up. 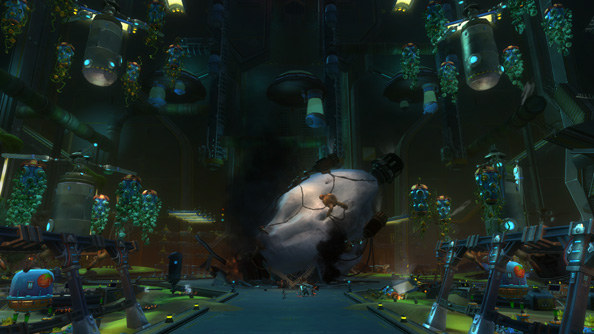 Telegraphs are the best

Attacks in WildStar will announce their arrival in the form of big flashing shapes that appear on the floor a moment before they’re carried out, allowing you loads of time to dodge and avoid them. Cones and areas of affect are no longer obfuscated and mysterious things, instead appearing boldly around or in front of the enemies about to attack. Your own attacks are telegraphed on the floor — not that mobs seem to care — for your benefit, so that you can accurately aim and maneuvre and strafe and dance about the place, firing off weapons and spells and traps.

Such a simple idea, it even extends to environmental damage: buzzing sawblades will have their own circular red telegraph beneath them, while bolt of lightning will be shortly preceded by a widening ring denoting not only where it will strike, but when. Basically, telegraphs give you a clear indication of when you’re about to be hurt in WildStar, removing that grubby mysticism of how attacks actually work that’s prevelant in many other MMOs. 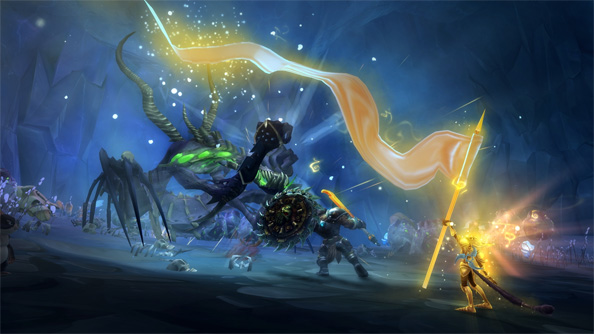 The Engineer is WildStar’s pet class

The last class to be introduced to WildStar’s line-up is the Engineer, who commands up to two robots, allowing him to tank from a distance. Naturally, this makes the Engineer WildStar’s de facto pet class, capable of summoning different kinds of combat and support bots on the fly for crowd control and healing as well as murdering things by robo-proxy. The Engineer can also hop into an exosuit for short periods of time to deal extra damage up close, while class specific weapons and skills include launchers and artillery strikes for long-range fighting. Also, the robots are cute. Look at their stupid little robot faces. Like they don’t even know.

Given that it’s possible to play as a robot (by choosing the Mechari race) and to have a Scanbot buddy (by choosing the Scientist Path), opting to play as the Engineer class means you can be in control of four robots at once. That’sloads of robots. Thanks WildStar. 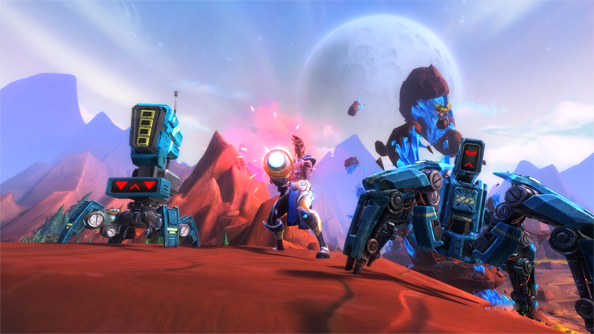