Here are the first four notes I took while playing the opening stages of Wolfenstein: The New Order.

Wolfenstein opens with BJ Blaskowicz in the cockpit of a WW2 bomber being piloted by a man doing a Scottish accent, while all around him allied planes dogfight with experimental Nazi jets. In this version of reality, the Nazis are really rather clever and have invented all manner of technologically advanced machinery. Their overpowered superplanes wreak metal-shearing havoc, punching holes in the sides of allied troop transports and forcing a frenetic Blaskowicz to actually leap from plane to plane, patching things up and slapping panicking soldiers, dumping crates from cargo bays to regain altitude and taking to cannons to take down enemy targets.

It’s totally ridiculous, but Wolfenstein plays it with Max Payne straightness, the cool headed inner monologue of the protagonist muttering in florid metaphors during cutscenes and between bouts of gunfire and action. Wolfenstein is comic, but not comedy, and it never winks at the camera in the way you think a game with giant robotic dogs might. By the time the opening chapter ends and you’re shown a paralysed and wheelchair-bound Blaskowicz time lapsing away 16 years in a Polish hospital ward as the Nazis effortlessly win the second world war, seize absolute power and take over the planet, you’ll have been utterly sold on this world’s bizarro science-fiction. 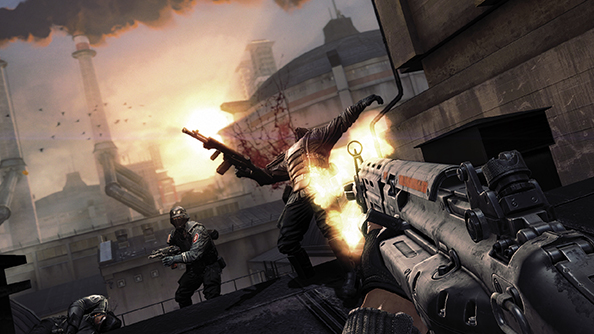 As well as a neatly pitched story, Wolfenstein is also a competent and refreshingly straightforward shooter. The opening hours lump you with standard heavy World War 2 weapons, pistols and rifles with satisfyingly snappy kickback, firing hot bullets that pelt the already tech-enhanced Nazi soldiers with gory impactfulness. As you work through trenches en route to Deathshead’s medieval skyscraper fortress, enemy soldiers alternatively gung ho charge you or slip into available cover. Their behaviour isn’t remarkably clever, but as fodder they present an enjoyable shooting gallery, taking just the right number of bullets before they fall down, succumbing immediately to well-aimed headshots. It’s that very subtle confluence of mechanics that’s so hard to put your finger on, but makes you think “hmm, yes, shooting that Nazi just now was rather pleasant”.

Encounters are sometimes made more tactical with the introduction of special commander units who are capable of calling in reinforcements should they spot you and reach a radio transmitter in time. Here, stealth can be employed to silently assassinate those soldiers who conveniently face in the opposite direction, before you can reach the commander himself and stab him in his reinforcements beckoning throat. That’s optional, there’s a button to unscrew silencers. You can swank right into these scenarios, dual wielding noisy assault rifles, screaming, chucking grenades and mowing down the regular enforcements and their reinforcing buddies. It’s the more challenging approach, but Wolfenstein doesn’t punish you for mucking up stealth. 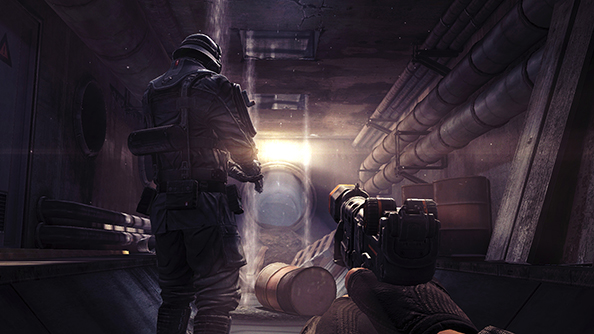 By hitting certain tallies of kinds of kills you rank up in one of four combat proficiencies: stealth, tactical, assault and demolition. Explode a number of Nazis with grenades and you’ll earn grenades that explode on contact. Rack up kills with a certain kind of weapon and you’ll unlock bigger ammo clips. Fairly standard stuff. Wolfenstein doesn’t overextend itself with inventive progression and frills, instead it focuses on nailing the genre’s shootybang fundamentals, which it does very well indeed. The occasional opportunity to pluck a chaingun turret from its mooring and run around with it for a minute, shredding up entire platoons of semi-bionic soldiers, hearing the light tinkling of the spent casings as they hit the hard stone castle floor, it’s enough to forgive any lack of a bullet-time twist of wall-run gimmick. Wolfenstein instead just feels refined and unpretentious.

As a nod to the original game, and, well, because they’re fun, there are plenty of secrets and hidden rooms to be found. Switches hidden on statues reveal secret passageways behind ostentatious portraits of Nazi generals, combination locks can be solved with a rudimentary knowledge of the German words for one, two and three. This is mostly in aid of finding scraps of fiction, discarded letters and other documents, but secret areas will sometimes present you with shortcuts and opportunities to stealth through areas otherwise thick with angry guards. 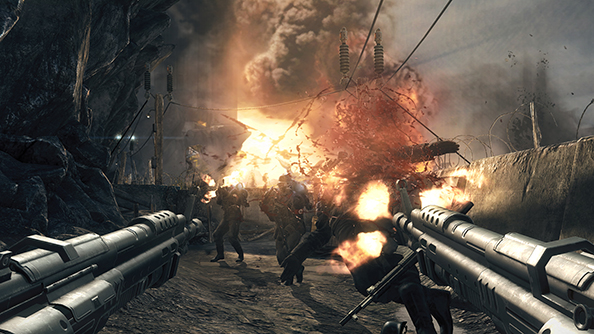 And there are dogs. Giant mechanical canines appear very infrequently as bullet sponging mini-bosses, while lesser, only partially modified German Shepherds act much as they do in other war games, running up to you and attempting to bite you in the esophagus until you can hammer F to cruelly stab them a whole lot for simply performing their duties. Hulking bionic ubermensch must be strafed around madly and riddled with whole armouries’ worth of ammunition to shear off their outer layers of armour before pounding their fleshy, vulnerable inner parts.

Read more: our list of the best World War 2 games

The Nazi forces are varied and intimidating, and they’re led by the genuinely sinister Deathshead (that’s ‘Death’s Head’, not ‘Death Shed’, though it wouldn’t surprise me to learn that he operates a shed where he murders people in mad experiments). He’s a mutilated, grinning visage of perfect teeth and scar tissue, and at one deeply unsettling point early in the game, as you’re captured and doomed, Mister Deathshead himself appears to stare at you unblinking from behind a thick pane of glass. The way his head quietly tracks your bouncing movements as you run around the room is a ridiculous trick, but it’s still upsetting. As is what follows: a harrowing and painfully gory scene that cements the idea that, yes, these Nazis are rotters and need thumping. 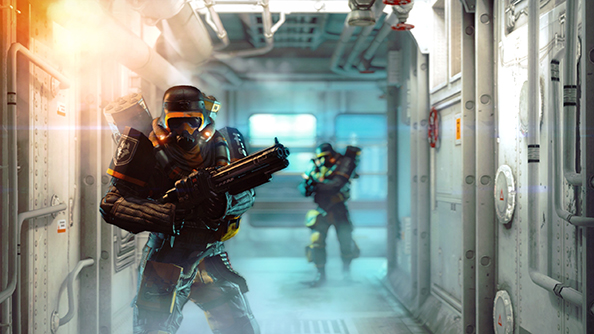 The game shifts gear and time-jumps forwards to a Nazi-controlled 1960, in which a defiant and recovered Blaskowicz must find the last few remaining members of the resistance and kickstart a new rebellion. The weapons you procure now more closely resemble the near-future tech of recent Call of Duty games: sniper rifles with advanced scopes, mechanical ED-209 style automatons, hovering robo-drones and plasma chucking supercannons. It’s all just as gung-ho, you can still dual wield huge sniper rifles and storm into battle like a man possessed, except things are darker and more metallic now, and your enemies come in more surprising shapes.

A world under the jackboot also presents some interesting set pieces. In one, while carrying first-person coffee back to your train cabin, you’re stopped by a high-ranking Nazi officer who subjects you to her personal psychological evaluation, in order to determine if you are of “pure blood”. Your choice of picture cards determines how the menacing and surreal scene plays out, but it’s the sense of helplessness and impotence in an oppressive, enemy controlled world that makes it. You’ll probably get a chance to blow that woman up later in the game, that’s sort of how these things play, but in that moment, forced at gold-plated Luger-point to pick between a bee and a flower to prove your Aryan heritage, you’ll feel something you probably didn’t expect to feel playing a Wolfenstein game.

There’s no self-congratulatory fanfare around The New Order’s infrequent nods to its hallowed past. Blaskowicz doesn’t remark “oh what a lovely roast dinner” when he first scoops a plate of chicken into his gullet for some extra health. This is no embarrassingly flailing Duke Nukem Forever sort of self-parody, it’s a confident and competent shooter that recognises precisely what’s appealing about the subject matter of robotic super Nazis and bionic dogbots, and presents it with total conviction. Wolfenstein: The New Order is bound to be one of this year’s best shooters.