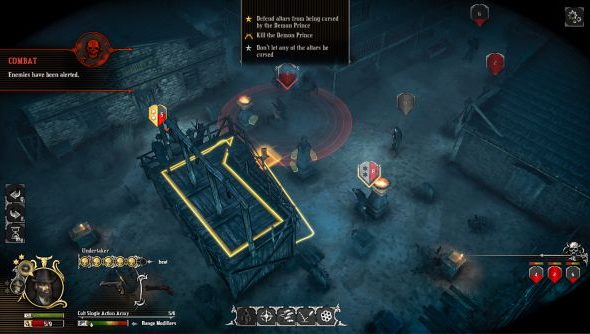 Hard West, a turn based squad-tactics game about cowboys that takes a sharp right turn into the demonic quite early on, has now come out. That means our esteemed colleagues have passed final judgement on its quality and, in one of the odder turns of the last few years of games marketing, an accolades trailer showing off what people think has been released. We’re posting it because it has some nice footage of cowboys getting shot a lot in it.

Ordering tiny humans around is the best, hence our list of the best strategy games.

Because we live in a fantasy universe in which only dreams can exist, the game is already in a Steam sale despite not having been out for that long. 30% off puts it to £10.49 / $13.99 / €13.99. Those who can be bothered to review it over there also seem to have enjoyed their time with Hard West, 83% of 378 folks giving it the thumbs up.

Despite an interest in it, I haven’t found the time or money to sit down with Hard West yet. The Steam Sale price is tempting, but as is becoming rapidly obvious to anyone who keeps track of this sort of thing, Steam sales are a competitive market where new indie games are never going to win out. For example, yesterday I bought the Borderlands 2 GOTY edition, which is probably going to run me about 100 hours if I bother to finish it all, for little more than a fiver. That’s not a winnable scenario if you want to also make money on your game.

Point being, it will take personal recommendations to drag me towards this. Who out there has played it, and what did you think?