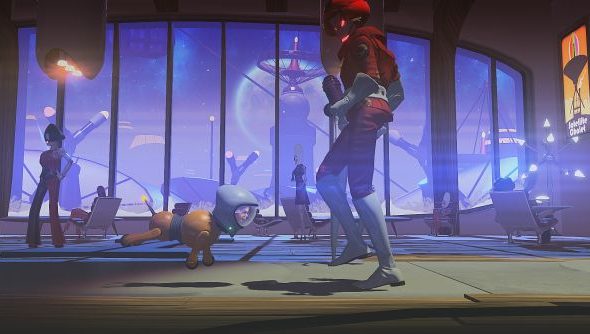 Double Fine have now gotten to the point where their next project being a total departure from what they’ve done before is no longer surprising. I’d be more worried if they managed to find a successful theme and stick to it rather than bouncing around the plane of ideas, wacky plans in hand. The turn up for the books this time is Headlander, a combo of their usual adventures with Metroid style combat and platforming thrown in. Made in partnership with Adult Swim, you play a disembodied head inside a flying helmet who can attach on to various robots to explore the dystopic retro-futuristic world.

I mean, obviously, what else could it possibly be?

An announcement-preview over on IGNgives the break down. You’ll be floating around a space-station, taking control of various bodies by landing on top of them. Each have different abilities that will let you fight better or explore further. The latter is the focus, letting Double Fine’s art design and writing come to the fore in the form of jokes, jokes and more jokes. Unlocking new areas means having a body with the right clearance level, so you’ll want to avoid blowing them up wherever possible.

Given he woke updecapitated, the nameless protagonist is having a hard time remembering things. You’ll discover his story and how he came to be the last semi-living human being along with him. Characters respond differently depending on who you’re currently sat atop, so it’s as much a body-swapping puzzle game as anything else.

There’ll be more on Headlander coming out of PAX this weekend, so keep an eye out for it. It certainly looks stunningly weird, hopefully Double Fine can build a fun game to contain its mad world.

{"schema":{"page":{"content":{"headline":"Headlander is Double Fine’s next game, a Metroid-ish adventure game where sometimes you’re a robot dog","type":"news"},"user":{"loginstatus":false}}}}