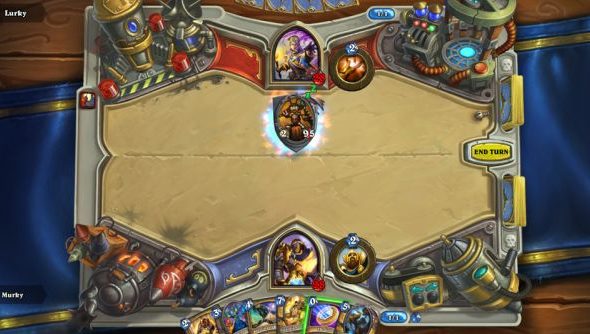 Hearthstone’s co-op, which has been rumored thanks to datamining for a little while, has finally reared its beautiful locks and will show up in the weekly Tavern Brawl mode tomorrow. In it you will be randomly assigned either Priest or Paladin with a pre-constructed deck to face off against the two power, ninety-five health Gearmaster Mechazod and his army of tricks, traps and lil’ robots.

Here’s the best of the burgeoning CCG genre on PC.

The mode itself is jerry-rigged rather impressively into the normal game client and play area. As described in a post on Battle.net, the Gearmaster himself is a taunt minion that sits on the field, switching sides after every turn so he is targetable by either player on the relevant turns. Once you’ve ground through his mountain of health and friends, you’ll both win. However, even if you lose, you’ll receive your free pack for the week.

It’s a cool idea, but I’m not sure the way it’s been supplanted into the normal routine has the level of polish I expect from Blizzard. The reason the decks have to be pre-constructed, for example, is a Power Word: Pain or Equality would immediately trivialise the encounter. Perhaps it was the only realistic way to make it work, but it doesn’t bode well for the long-term idea of 2v2 or other co-op modes in the game, versus how valuable a redesigned UI and turn system to accomodate this would be. At a guess, this is a trial run to see how popular the mode is before that amount of work is put in.

The Tavern Brawl should go live at 4pm UK time tomorrow, which is 11am EST and 8am PST or 5pm in Europe. If you wish to co-op with a friend, you’ll need to challenge them as you would normally, otherwise you’ll be matched with a random partner.