Hearthstone’s expansion, League of Explorers, is almost upon us – Blizzard are rolling it out on 12/13 November depending on your territory, and in preparation for that release the base game’s been updated to v4.0 and been bestowed with new card backs, search terms, greetings and more in the process.

If you’re here, you’ll probably want to see all the new cards in League of Explorers.

There’s also a host of new Innkeeper and Mirror Match greetings been added. Here’s all the known new lines thus far (via Reddit). Starting with the Innkeeper greetings, which play when you start up the game in that definitely not enraging at all faux-Scottish dwarven accent:

Come in, come in! Tell me all about your travels!

There ya are! Back from your adventures?

Ohhhhh..! I can tell you have some new stories tonight!

Everyone! Get in here and say hello!

The inn is brimming with explorers tonight!

What treasure(s) are you seeking today?

Ready for an adventure?!

Oh, you’re back! Lemme get you a drink.

And now the Mirror Match greetings, for when you fight someone playing the same hero as you:

Paladin: I will fight with honor! I will command the light!

Hunter: Let the hunt begin! Bring it on!

Warlock: Your soul shall be mine! I am your nightmare!

Warrior: Victory or Death! Hahaha, bring it on!

Rogue: Watch your back. I always do.

Shaman: For Doomhammer! For the Frostwolves!

Priest: The Light shall bring victory! Light smiles upon the just!

Druid: I must protect the Wild! Nature must be preserved. 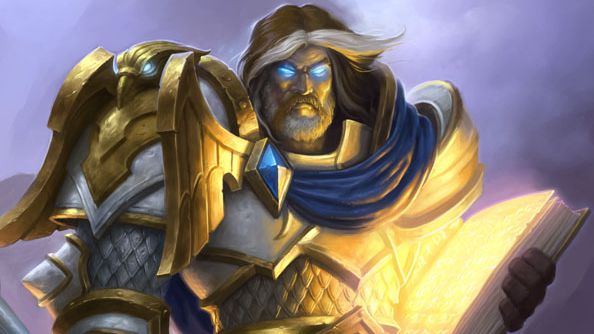 Various effects from League of Explorers have also been datamined, including the mechanics of the final Wing that wasn’t detailed on stage as heavily as the others. You can see all that over at Hearthpwn, if you’re not scared of spoilers.

Other details found in the files suggest upcoming Tavern Brawls. It looks like there will be one with a focus on deck-building during play, letting you pick cards to put into your hand, then putting them in your deck when they’re played. There’s few details on it so lots of conjecture at the moment, but it may be Hearthstone’s version of something like Ascension or the DC Deck-Building Game from Cryptozoic. If so: hooray. There’s also details on Winter Veil-themed Brawl cards, which is WoW’s Christmas celebration so expect a seasonal event here as well, and a selection of Fate cards which, at a guess, will be randomly added to your hand in a future Brawl based on some condition.

And now the headline act – those minor bug fixes. Play me out, Blizzard (courtesy of Battle.net):

– Resolved an issue where various traps could trigger when your board or hand are full.

– Various audio, graphical, and UI issues have been resolved.