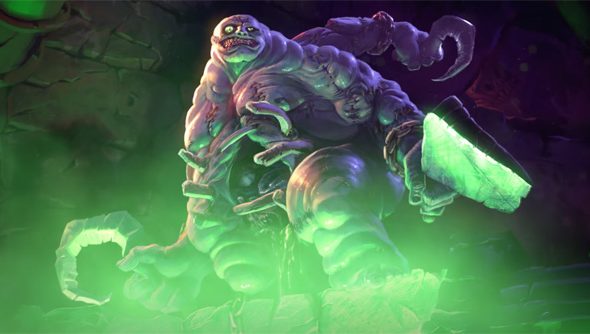 The Curse of Naxxramas isn’t one of those flash, bang, now-you’re-a-frog hexes. It’s more of a slow-burn spell, unfolding its horrors week-by-week to Hearthstone players.

This week’s wing is the Construct Quarter: a gunge-powered laboratory patrolled by stitched-together new minions.

“It’s a hair-raising experience that’ll leave you in stitches, but best of all, deconstructing these vile reconstructions will reward you with all-new Hearthstone cards!”

The new cards are divvied up between the Construct Quarter’s bosses, like so:

Disassemble all four and you’ll be able to shuffle two new legendaries into your collection: Feugen and Stallag. But early reports suggest you’ll need a taunt-heavy deck to succeed.

Curse of Naxxramas has brought Hearthstone its highest revenue ever – despite payment issues with the Plague Quarter.