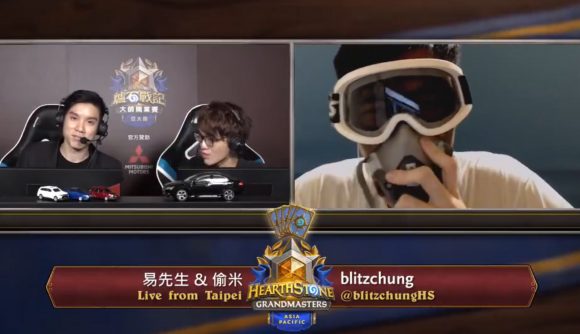 This week, Hearthstone pro Ng Wai Chung – known as ‘Blitzchung’ in-game – was suspended by Blizzard after a post-match interview where he called for the liberation of Hong Kong. Many players have been threatening to boycott Blizzard ever since, and while Blitzchung is much more friendlier toward the company in his new statement, he’s still not sure whether he’ll return to competition.

“First of all, I’m grateful for Blizzard reconsidering their position about my ban,” Blitzchung says in his personal statement. “Earlier this week, I told media that I knew I might have penalty or consequence for my act, because I understand that my act could take the conversation away from the purpose of the event. In the future, I will be more careful on that and express my opinions or show my support to Hong Kong on my personal platforms.”

In the wake of the controversy, Blizzard has reduced Blitzchung’s one-year suspension to six months, and has restored his prize winnings for the tournament. “To be honest, I think six months is still quite a lot to me,” Blitzchung says, but adds that he appreciates the opportunity to return to Grandmaster competition.

In addition to the action against Blitzchung, Blizzard also initially said it would stop working with the casters who presented the segment – this, too, has now been reduced to a six-month suspension. Blitzchung still says “I wish Blizzard can reconsider about their penalty on the two casters involved.”

Even with all that in mind, Blitzchung isn’t sure if he’ll compete in Hearthstone in the future. “Honestly, I have no idea on that yet. Since my next tournament is very likely to be the Grandmaster tournament of next season, it’s probably at least a few months from now. I will take this time to relax myself to decide if I am staying in competitive Hearthstone scene or not,” Blitzchung says.

“Hearthstone changed my the way I live, I really love this community. Blessing to all the players out there, and blessing to Blizzard.”