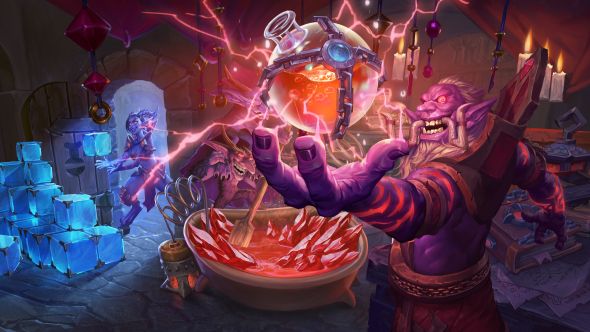 Update January 20, 2017: Compensation has been announced for those who have been affected by China’s Hearthstone server rollback.

After essentially deleting four days of player progress in Hearthstone to fix a corrupted database (see original story, below), Blizzard China and Chinese ISP NetEase have announced compensation for those affected.

If you fight with cards not swords or guns, check out the best card games on PC.

Reddit user tingozhu has stepped up with a translationof Blizzard China’s initial announcement. The key point is that, if players logged on before 6pm on January 18, they “may” receive the equivalent of 25 card packs, in the form of 1000 gold and five Classic packs, five Whisper of the Old Gods packs, and five Mean Streets of Gadgetzan packs.

If players used in-game gold or real-life currency to buy items in the game, their gold will be reset to the level before the rollback and what items are recoverable will be salvaged.

Presumably we can expect a similar deal if this ever happens elsewhere. Would this placate you, if you’d lost four days of progress?

Original story January 19, 2017:Chinese Blizzard done screwed up. Yesterday, they issued a statement explaining that their Hearthstone database had suffered an apparent power failure on Saturday, resulting in damage to the data. Exhausting other options, they felt they had no choice but to roll back the game’s data to just before the incident occurred, causing every Hearthstone player in China to lose four days’ worth of progress.

That’s news in itself, but what the incident reveals about card drop rates probably has relevance beyond China.

The Hearthstone community in China is understandably furious, with spleen being vented all over social media. All the gold, rank, missions and cards earned in four days have gone, and demands are being issued for lost legendary cards to be restored. Blizzard have made a very contrite apology on Weibo – China’s Twitter – translated byczhihong on Reddit. They promise some kind of compensation after the servers are restored.

This would seem to suggest that card drops are predetermined. Hearthstone game director Ben Borde says cards are decided as you open each pack , but briel says this could still fit the theory that drop rates for different types of cards are predetermined, if only the cards themselves are randomly chosen when the pack is opened. This also fits with the evidence we’ve seen since the rollback.

It seems fair to suppose this is how Hearthstone drops work internationally, but the same principles could inform Overwatch’s loot boxes or Diablo III’s loot drop rates. Indeed, here’s another article by briel_hssuggesting that a ‘pity timer’ – a term coined in Diablo – exists in Hearthstone to increase the drop rate for rare items if you’ve gone a long time without getting any.

We’re likely to learn more about the wizardry behind these drop rates when China forces developers to disclose the odds of the loot in each box, which looks set to happen this spring.