Hearthstone: Kobolds & Catacombs is releasing December 7, so it’s time to get the last of these card reveals in. Ours is a Mage Epic that looks to be a key part in a brand new archetype – big spells. You can see the card, and our initial thoughts on it, in the video above.

Here are all the other Hearthstone Kobolds & Catacombs cards.

Since filming, one card in particular has been revealed that’s worth flagging up – Dragoncaller Alanna: 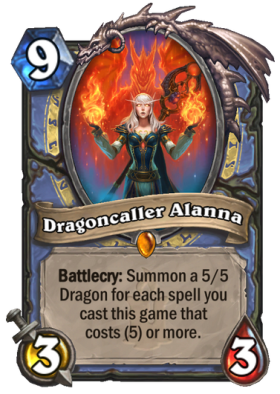 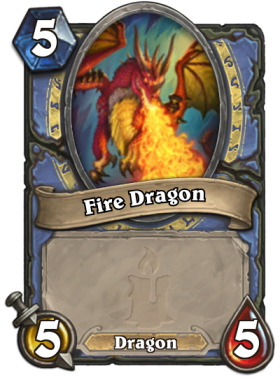 Clearly, this is a huge payoff card for a deck with Dragon’s Fury and other associated spells. It doesn’t match up too favourably against some powerful plays in the game, but it’s going to create huge stats for its cost. Definitely a key piece of the puzzle in a deck that the basic version of basically builds itself:

That’s extremely top-heavy and unlikely to be immediately competitive, but it’s a fun start. Cutting some later game cards for early minions – be they straight value-focused neutrals like Mistress of Mixtures, or further synergy pieces like Arcane Artificer – will probably serve you better. There are also cards that are still yet to be revealed, including a large number of neutrals and a couple of Mage cards.

For more information on the card and potential new archetype, we spoke to Blizzard’s Peter Whalen – senior game designer on Hearthstone and a big fan of the card in question. 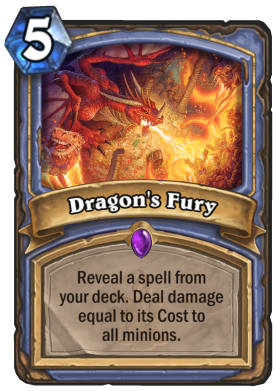 PCGN: What do you think Dragon’s Fury will do in-game, and are you intending to create a new archetype?

Peter Whalen: One of the things in Kobolds & Catacombs that we asked of each of our classes is what’s the core fantasy of this class in a dungeon party? Rogues are sneaky so we gave them secrets, that’s a thing that makes a tonne of sense. Mages in a dungeon party, they’re casting these massive, powerful spells. They’re the guys you bring along as long range artillery.

How do we capture that in Hearthstone? Cards that are cool if your deck is full of high cost, powerful spells. Dragon’s Fury is one of the cards that can really pull that together. If you’re paying a lot of high-power, expensive spells in your deck, what do you need? You’re going to fall behind on board early game because you don’t have things like Frostbolt potentially, or Fireball even. You need something that’s going to let you play defense, I’ve made it to turn five, I need something to clear the board because I’m falling behind and here’s a way to do that.

Dragon’s Fury is a very powerful board clear if your deck only has spells that cost, say, five or more. One of the most powerful that we’ve ever made at that mana cost. It gives a big spell deck, which is how we refer to that archetype internally, a way to get back on the board if they’ve fallen behind. 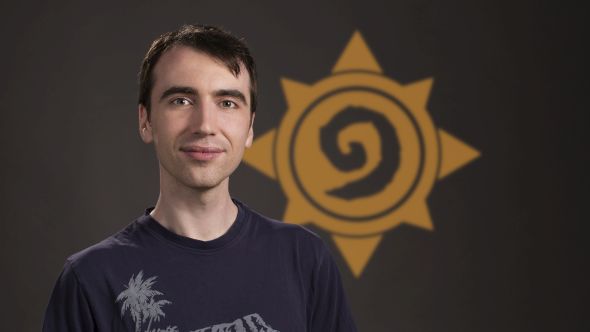 Were there other versions of Dragon’s Fury through development?

PW: We tried a bunch of things that triggered off the cost of spells in your deck – Dragon’s Fury was one of them. I think we had four or five of them super early on in design. Dragon’s Fury was the one that survived because it did exactly what the deck needed. [It] really needed a way to get back on board after playing defense. It didn’t need ways to draw more cards, ways to freeze minions, but it really needed a way to fight back and get back on the board.

We tried very hard to drive the cost of Dragon’s Fury down as low as possible by emphasizing the things that were really important – board clear and it triggering off the cost of spells in your deck.

From a thematic point of view, was this always how it was flavoured or did it go through iteration on that front as well?

PW: It actually went through some iteration. It had a very late art swap with some other cards in the set. The art for this is my absolute favourite piece of art in the set, I love it so, so very much that I actually ended up buying the original of it. The card that this art was originally on, it ended up not working for it, that card went through some iteration. We really… When I say ‘we’, I personally really desperately wanted to save this art in this set.

This was a really great fit for it so we made a three-way art swap with some other cards and this ended up here. It fits the Mage thematic of the set really well, there’s some dragon stuff going on, there’s some great firebreathing dragons, the animation for this card is also fantastic. I’m really happy about how that swap came together. It wasn’t the original thematic but I think it ended up working out really well.

You’re adding another board clear to Mage, is that dangerous territory?

PW: Certainly it’s a little bit dangerous – I mean, every time we print powerful cards there’s some amount of danger involved. But Dragon’s Fury in particular is very build around, it takes a lot of effort to make Dragon’s Fury a powerful card. You have to not play Frostbolt, or Primordial Glyph, or other cheap Mage spells that are very, very strong.

So Dragon’s Fury is a little bit less of a risk than other things, because you have to actually constrain your deck in other ways in particular ways in order to make it powerful. You can combine it with things like Blizzard or Flamestrike, but on the flip side you’re not going to be playing something like Freeze Mage at that point, that’s going to just destroy your opponent in one turn. Even Dragon’s Fury revealing Frost Nova isn’t really achieving its potential. You’re going to be playing different spells in your deck than you would have done in the past so it’s a little bit less risky than other things. 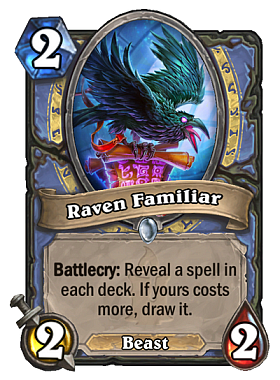 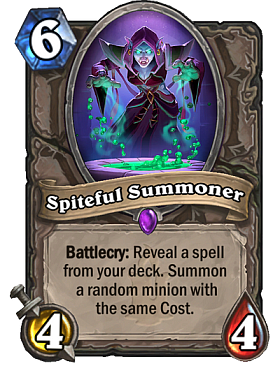 Adding deckbuilding challenges seems to be a central theme of Kobolds & Catacombs?

PW: Creating new deckbuilding challenges is definitely one of our goals for sets. It does a couple of good things for us – it allows players to show their creativity, it allows them to build new decks and explore a bunch of different themes. At the same time it means that the decks that you’re running up against aren’t the same decks you were playing against before. You’re not going to look at some of these cards and just slot them into an existing deck and make your Raza Priest or Jade Druid strictly better. We like to have a mix of these cards, some things that you’re going to put into your existing decks that are going to make them feel a little bit different. But we want to have cards that allow you and your strategies to evolve and try out new things. Dragon’s Fury is a good example of a card that creates new opportunities for decks, that creates new potential archetypes.

Do you see the big spells archetype being effective in Wild or Arena?

PW: Arena’s a little bit more difficult, though you certainly have opportunities – if you see Dragon’s Fury early on and you can only choose expensive spells from then on, yeah, it’s an incredibly powerful effect in the arena. It’s just tough not to take cards like Frostbolt or other very powerful mage cards that you’re likely to see in Arena.

In Wild you have a lot more options. Especially as time goes on and cards like Firelands Portal move from Standard into Wild, you’re going to have options in Wild with Dragon’s Fury that you don’t have in Standard. That’s really part of the fun – these build around cards, these cards that inspire new archetypes and require other things to meet their conditions, you have so many more options in Wild, seeing how your old cards interact with your new ones.

Are there any special rules for this in Arena?

PW: There aren’t, it doesn’t have any kind of special class adjustment in Arena. It’s an Epic so it’s a little bit less likely to show up in Arena than something like a Common or a Rare. There aren’t any explicit modifiers on it, if we need to we’ll evaluate that as time goes on.

Kobolds & Catacombs is out December 7, including the single-player Dungeon Run mode.