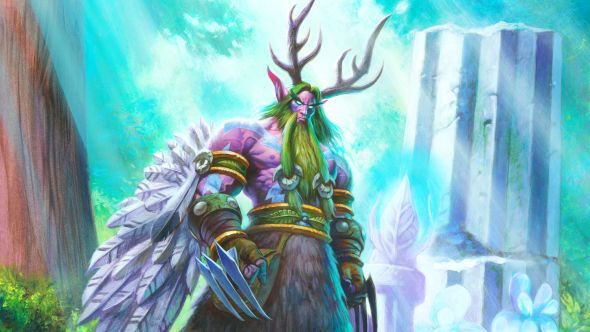 The Hearthstone expansion cycle is in full force, and as we’re a couple of weeks in that means the powerful decks have started to be figured out. This time around that’s Druid, with a multitude of possible archetypes and some ludicrously powerful cards – along with old synergies like Jade – moving it to the top of the tier lists and popularity charts. Despite that, it’s not time to bring out the nerf bat yet, according to Blizzard.

Here’s what arrived in Knights of the Frozen Throne card packs.

“One of the great things about this time is there’s just so much chaos and people really coming up with creative new decks all the time,” Hamilton Chu says, one of the executive producers, in an interview at Gamescom today. “Right now Druid is seeing a lot of play and we’re also seeing a lot of people starting to come up with decks to counter it. That’s really a great part of Hearthstone that I love: seeing the community get really creative with their deckbuilding.”

It has reached the point of people complaining about complaints, as well as a lot of community favourites running different decks to try to counter it. Druid is, definitely, very strong, if not outright overpowered.

“We always keep a really close eye on balance, it’s something really important to us. We’re always keeping a pulse on the situation,” Chu continues. “At this time, it’s early days, there’s often something that feels really powerful – and that’s great, we want people to think ‘this deck is really fun, I can do some cool stuff.’

“Most of the time, the community and the meta evolves, they learn to counter it and people come up with new decks as the cycle goes on. Sometimes there’s something we need to pay closer attention to, and we will, but I think right now it’s fun watching everything fall.”

In the past, the Hearthstone community has often accused Blizzard of waiting too long to make changes. Referencing exactly that, community figure Reynad made a video saying the Druid card Innervate needed to be changed or removed immediately. Blizzard, on the other hand, always points out that if they ‘fixed’ something every time a deck or card was powerful for a couple of weeks, it would be a far worse situation. Dean Ayala expanded on a lot of this on Reddit a couple of days ago.

Whether Druid will be changed or not remains to be seen, but Blizzard are happy with it for now, and it doesn’t look like their slow-grinding balance gears will be speeding up any time soon.