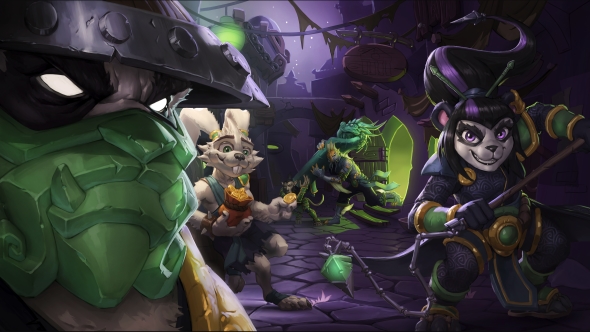 So, bugs are annoying. Bugs that recur and don’t get patched are worse. Bugs that crash a game can make you mad enough to take a hammer to your desk, especially in pressured multiplayer games.

So spare a thought for Hearthstone players on Mac. They’ve been living with a game-breaking bug for over 20 months now, in which the game will display pretty rainbow graphics before crashing out, causing players to automatically forfeit any matches that were underway.

If you like card games but not crashes, try some others from our list of the best card games out now.

Blizzard first addressed the issue on the Mac technical support forum back in April 2015, when we didn’t know whether the Disney Star Wars movies would be any good and people were still stoked that we landed a probe on a comet.

The problem, said forum support agent Glaxigrav, was that Blizzard’s “quality assurance teams haven’t been able to successfully reproduce this 100% of the time, which makes it difficult to fix.”

The most recent official response was in September last year, about 17 months after the issue was first reported. This time it was community manager Zeriyah who commented – one wonders what has happened to Glaxigrav in the interim, whether he’s moved on, found a partner, whether he’s found happiness – and it sounds like Blizzard haven’t made much progress:

“We are continuing to try to pinpoint the cause of this issue,” says Zeriyah.

Reactions from the community range from the predictable outrage to disbelief that Blizzard can’t figure out what’s going wrong. Stecors says “this bug is still occurring daily after playing for about 1-2 hours. I really can’t believe you cannot reproduce it.”

Plenty of users have responded to Blizzard’s calls for technical information, posting hardware details, graphics settings and crash dumps, but it’s now almost three months since the last official response by Blizzard. We’ve asked them for comment, and will update this story if we hear anything new on the subject.