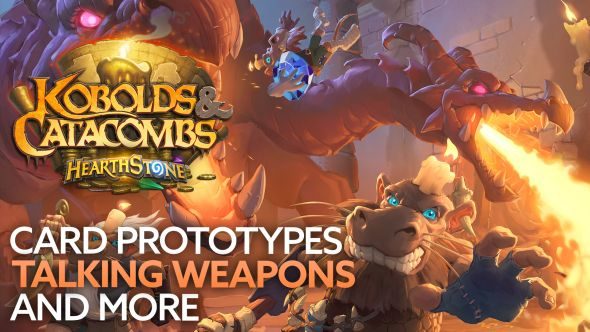 We’re on the eve of another Hearthstone expansion, with Kobolds & Catacombs banging on the dungeon door to be let in on December 7 with a batch of new cards and a brand new mode. We spoke to game designer Peter Whalen and art director Ben Thompson about the expansion, its best cards, and Hearthstone’s plans for the future.

Here’s all the Hearthstone Kobolds & Catacombs cards shown so far.

They answer a slew of our questions, including giving the development history of Rin and Azari, the Warlock Legendary that is capable of blowing up an entire deck. They also discuss the talking weapons introduced this expansion, avoiding just pulling from Legion’s artifact weapons, and which classic WoW weapons would make good additions to Hearthstone.

There’s also more serious talk about the future of Hearthstone as they head into a second full year without adventures, with three more expansions on the way. The ranked rework is still in development, though there’s nothing to announce yet, and much more.

On Friday we’ve got our exclusive preview card, as the reveal season rolls ever on, so look forward to that.