Ahead of the release of the latest Hearthstone expansion, The Boomsday Project, we’ve got yet more cards to show you. This time round, it’s the Meteorologist, a card perfect for both clearing your opponent’s board and letting you know whether you should pack your umbrella today (maybe).

The Meteorologist is a rare, six mana 3/3 card. That’s relatively expensive for a 3/3, but as ever, the card effect is what you’re really here for. Meterologist comes with a battlecry, and when you play it, it’ll deal one damage to a random enemy for each card in your hand. Of course, that’s not much good if you’re only holding onto a couple of cards, but a few choice selections should help ensure the card can dish out plenty of punishment.

Spell cards like Lesser Ruby Spellstone or Mage stalwart Arcane Intellect both let you draw cards, filling up your hand to help power up Meteorologist. Alternatively, you can opt for a card like Archmage Arugal, who makes copies of every minion you draw to add to your hand.

If you’d prefer a weapon, you could take Aluneth, which adds three cards to your hand at the end of every turn. You can only hold ten cards at once, of course, and you’ll have to use one in order to actually play Meteorologist, but that’s still nine damage, plus the extra three if you get to attack with the minion itself. 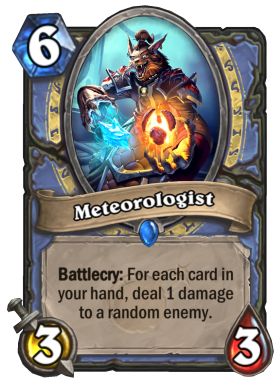