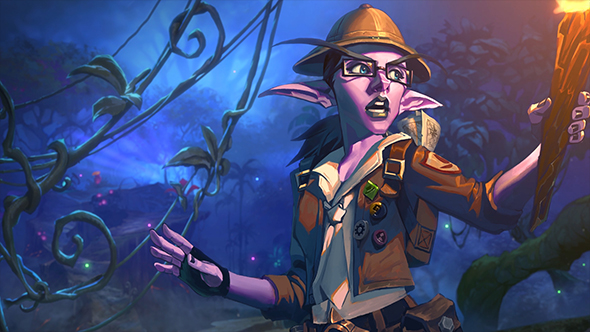 Update, March 16: The long-awaited replay feature is finally officially supported in Hearthstone, but don’t get too excited yet.

Hearthstone’s been missing some much-requested features like replays and stat tracking pretty much since launch, and though there are some unofficial options it would certainly be nice to have an officially supported way to review games and check your stats. Luckily, there now is an official app to do just that – the catch is that it’s only available in China.

Check out all the full Witchwood card list so far.

The Hearthstone Official Companion App is currently available on Windows PCs via the official Chinese site. It’s currently in beta, but does offer full replay functionality, a deck recommendation tool, and a real-time card tracker.

Redditor czhihong has broken down some of the details, along with screenshots. The replay function seems to record up to 200 recent matches, and even includes details like highlights of your card mouseovers. You can skip to specific turns, as well. Each replay has a unique ID that you can share with other players.

The deck recommendation tool showcases “interesting and cool decks,” and even tells you if you have the necessary cards and how much dust you’re missing if you want to build them. If you want to put one together, one click apparently lets you create the deck in your collection.

Hearthstone in China is hosted by NetEase, and their work is often separate from Blizzard’s, especially when it comes to quality-of-life additions like this. Back at BlizzCon, director Ben Brode suggested that replays will hit Hearthstone, but his comments suggested it would be some time in the feature. Hopefully this app indicates the infrastructure is in place for them to and handle more intricate tracking features, but for now players outside of China are out of luck.

It’s hard to deny that Hearthstone is a potentiallyveryexpensive game to play, and does everything in its power to nudge players into ponying up cash for booster packs or even just arena tickets, with free cards seeming few and far between.

With the potential barrier to entry looking to rise even further with the release of the new expansion, some are worried. At the Blizzcon Q&A panel, game designers Peter Whalen and Mike Donais responded to a query on how they were planning on making the game more accessible to newer players.

“-we’re doing a number of things to help with accessibility for Hearthstone. We’ve got it so that now if you have a Legendary you won’t get duplicates. That’s been in since Knights of the Frozen Throne. For Kobolds & Catacombs, we’re giving away a random Legendary weapon when you start up the game. There’s a number of other things we’ve done, and that we’re working towards. I’m pretty excited for some of the opportunities for getting some extra Legendaries.”

Donais followed up with a statement on how the legendaries are being rearranged, rather than just bloating the total number to collect.

Not quite the answer that most were hoping for, really. A free legendary weapon to start newer players off is a nice treat, but it still doesn’t address the rising cost in time and/or money required to assemble anything resembling a planned deck.

As ever, the Arena will be the great equalizer, putting more casual players on a safer footing with their more thoroughly grinded or better-monied counterparts, but even that isn’t always a free option.

Original Story, November 4th: During today’s Hearthstone Q&A, Hearthstone director Ben Brode offered an idea of some substantial features that will be coming to the game – someday, of course.

About whether replays would ever make the game, Brode says “The answer is yes, basically, but I don’t know when that day is. We’re going to be improving Hearthstone essentially forever, and it’s a matter of prioritizing which things make the highest impact. I think that feature’s awesome, though, and we should be looking at it at some point.”

However, it seems the team is already taking concrete steps toward getting stat tracking in place. “One of the things we’ve done recently is starting to build some of that infrastructure so that we can do some of that stuff,” says Brode. “We started sending out emails to players with their most interesting statistics and some of their histories. I think there’s a lot of room to improve and do more of that. I’d like to see some of that live on our website and have some kind of profile-like feature, but that’s something we’re still in discussions on.”