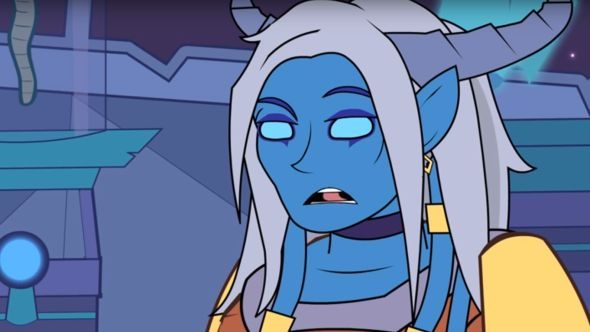 Following the reveal of the latest Hearthstone expansion, The Boomsday Project, earlier this week, Blizzard has released an animated short revealing a brand new legendary card. The video, which you can watch at the bottom of this article, seems to follow on from the live-action video released yesterday.

The video features intern Levi (who showed up in that original video). Having been transported to the Netherstorm, he’s trying to find his colleagues in order to return to the real world, all while accompanied by a robotic chicken version of senior game designer Peter Whalen. It’s all a bit strange.

Check out our list of the best card games.

Yesterday’s reveal showed off a host of new cards, and today’s video has followed suit. Levi and Chicken-Whalen come across Stargazer Luna, a legendary mage card. She’s a three-mana 2/4, with an effect that allows you to draw a card after playing the right-most card in your hand, which could be useful in the mid- to late-game (assuming she can survive any initial onslaught).

The short ends with a somewhat ominous shot of Levi and Peter being watched on a TV screen, accompanied by some maniacal laughter. Given that this is only the first in a series of videos, expect a bunch of new cards to be revealed with each new episode.

The Boomsday Project will introduce a series of new mechanics to Hearthstone. There are projects, which will offer buffs to both you and your opponent, as well as buffable ‘magnetic’ units. There are also Legendary spells, and Omega units, that power up significantly if you play them towards the end of the game. The Boomsday Project begins on August 7.