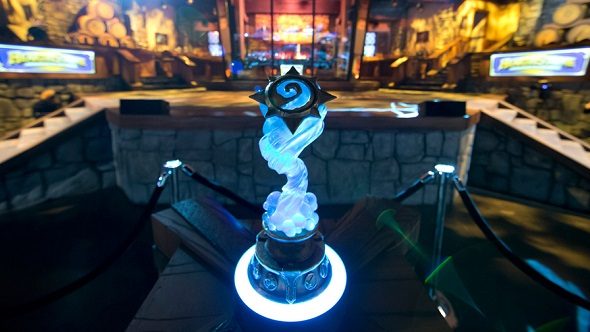 Not everyone will immediately get the appeal of watching competitive virtual card games. But that’s ok. Those people have clearly never watched Yu-Gi-Oh.

For us enlightened galaxy-brain esports fans, the Hearthstone Championship Tour (HCT) is regarded as one of the more intriguing gaming events of the year, as the finest minds in Blizzard’s strategic card game come together for a series of intense match-ups. This year’s prize pool sits at $250K, but for many players taking part, the real prize is the shot at the HCT World Championship in early 2019, which comes with a significantly inflated cash figure – a cool $1m.

If you’re excited for the Hearthstone championships, check out the rest of the best card games on PC.

While the pros compete for cash, HC points, and glory, we at home can follow along with the Choose Your Champion programme. You’ll want to get familiar with the pros taking part, because you can pick up free card packs by backing the right competitor. To help you make your picks, we’ve spoken to a few of the stand-out challengers for this year’s tournament.

Blizzard has split up the pros by region, with hopefuls from Europe, the Americas, Asia-Pacific, and China competing. If you watch a lot of Hearthstone streams then one name will stand apart from the rest – David ‘Dog’ Caero. Dog built a name for himself in comp tournaments like DreamHack Summer 2015 and Insomnia Truesilver Championship in 2016. Despite frequently reaching the final stages of these competitions, Dog has yet to claim the grand prize.

Since those high-level performances, Dog has turned his focus to streaming, building a successful career as a skilled player and entertainer. Despite his hiatus from the pro-scene, and the extra attention his name brings, Dog is confident he can put in a winning performance this weekend.

“I feel a little bit [of extra pressure],” Dog says. “Most people put their packs on the line for me. But other than that, it’s not anything that I’m not used to. I usually put streaming ahead of competing because it’s more beneficial to me.” One of the reasons for Dog’s confidence is that he knows how to play almost every deck because he’s streamed so much. “Coming up with line-ups, and tech cards is the hard part of Hearthstone,” he reckons.

Being the biggest name in the tournament means a lot of attention but Dog’s experience streaming mean nerves are unlikely to be an issue.

“When I first started competing in tournaments it definitely [affected me],” Dog explains. “Even without an audience, in my first tournament I had the jitters and it was awful. I played poorly. It’s just experience. Once you get into enough tournaments with a live audience it doesn’t really affect you. I’ve been in enough, now it’s not too bad.”

Another first-time competitor in the HTC is Taiwanese player Wu ‘BloodTrail’Zong-Chang. BloodTrail has earned the nickname ‘The Free-to-Play Pro’ by building his pro-level decks entirely from packs he has won in-game. That’s right, he’s built his career without spending a penny.

“I didn’t initially set out to inspire players, but it’s awesome if I have,” BloodTrail says. “To be blunt, I personally don’t have a ton of extra spending money to use on packs. My approach has been to play and win 30 matches per day across three severs to earn the cards as quickly as I can, and I’m glad that I’ve been able to reach the Summer Championship this way.”

As a young player, it’s pretty daunting for Bloodtrail: “I feel good and nervous at the same time. It’s my first time out of the country and I know nothing about traveling. I would like to thank the esports manager for Hearthstone in Taiwan for bringing me all the way from Taiwan to LA.”

Chinese player Gao ‘Leaoh’ Yang represents the more experienced side of the competitive Hearthstone scene, not that experience brings humility in competitive Hearthstone. “There aren’t any particular players that I’m afraid of facing,” Leaoh says.“After I qualified for HCT Summer, I focused my daily routine entirely on getting ready for the event – it’s just been eating, sleeping, and practicing,” Leaoh says. “I’ve done a lot of preparation for this event and I feel very confident.”

Any hesitation comes only from a critical eye on his own abilities: “Sometimes I can be a little too rigid when playing – I need to work on being more creative. I have no issue with jet lag and am so used to the food here, so there’s no excuse for me to underperform in the tournament.”

The HCT Summer Championship kicks off today, June 28, at 08:30 PT / 16:30 BST, and continues until July 1. The group stages will play out across the first two days with two players from each of the four groups progressing. Each group has one player from each region who will hope to make it through to the playoffs on Saturday. You can watch all the action on the official Hearthstone Twitch stream.