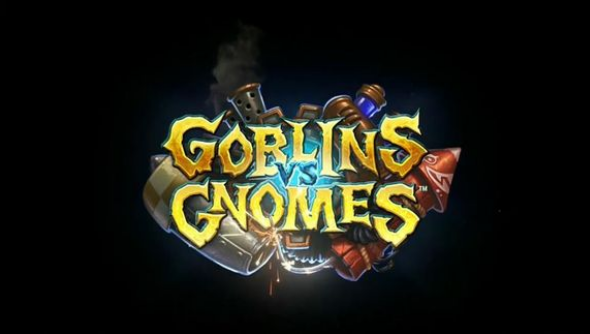 Blizzard have announced the next big expansion for Hearthstone at Blizzcon. Goblins vs Gnomes will face off the Horde and the Alliance in a battle of cards, with heavy emphasis on the inventors and creations at the heart of the races’ shortest members.

The expansion contains over 120 new cards, which are some of “the most dangerous you can imagine”. In the animated introduction video to the expansion, a jolly song shouting the merits of the goblin/gnome rivalry signalled the humorous tone. This is reflected in cards such as the Explosive Sheep and the Annoyatron.

Goblins vs Gnomes is classified as the “first” expansion for Hearthstones. Previous add-onCurse of Naxxramas is considered as an ‘adventure’ rather than an expansion, which suggests that Goblins vs Gnomes will be larger in scope and scale than Naxxramas.

In further examples of what to expect, production director Jason Chayes discussed pilotable mechs, which are deployed into battle as explosive and deadly characters. If destroyed, the pilot ‘ejects’ from the mech and becomes a new playable minion on the board. These are randomly selected from a variety of pilot types.

The new cards will be purchased using gold, in a similar manner to how current players purchase experts sets.

There is no word on if Goblins vs Gnomes includes a single-player adventure like Naxxramas, but Chayes did say that there will be a brand new board and new music.

Despite only being announced today, the expansion is closer than you may think. Goblins vs Gnomes is in the final testing phase, and will be ready next month.