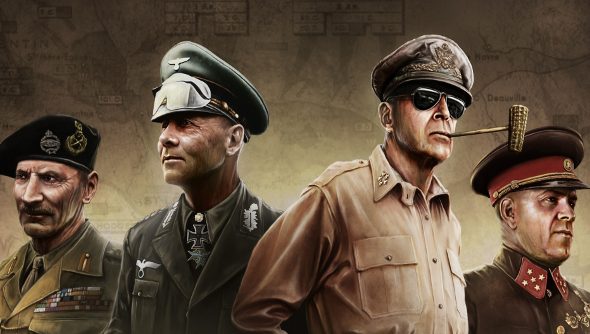 As the then head of the Luftwaffe, a certain Hermann Göring, found to his cost in 1940, you can’t win a war with air power alone. The might of the Nazi air power might have pounded the streets of Britain over and over again, but without a land invasion, she just wouldn’t relent.

A fan of historical warfare action? Check out the best World War 2 games on PC.

Little surprise, then, that the forthcoming Hearts of Iron IV is keen to stress that success in its take on World War II will seen you spinning just as many plates as generals were forced to in the real encounter, taking to the land, taking to the seas, and taking to the air all at once.

In its latest developer diary, the team behind Hearts of Iron IV has taken time out to cast some light on the many different elements you’ll be taking charge of as you strive to conquer enemy territory and force them back into whatever hole they climbed out of. Or in Hitler’s case, a rather cushty little bunker in Berlin.

“Victory will depend on your armies, but not on them alone,” details developer Paradox. “With a new and improved battleplan system, you will be able to direct sweeping movements of troops through steppes, deserts and jungles. Area and mission based systems take the micromanagement out of naval and air combat.

“And, as you would expect from a Paradox game, history is only a rough guide. You can rewrite the past through your daring charge to Berlin through Denmark, or a desperate assault on the Japanese home islands.”

Indeed, the concept of being able to change history – ending the war in late 1944 say, or in a worse case scenario, seeing it spiral on into the late 1940s – is a real selling point. With Hearts of Iron IV out in June 6, we won’t have long to wait to find out whether it meets its own lofty expectations.