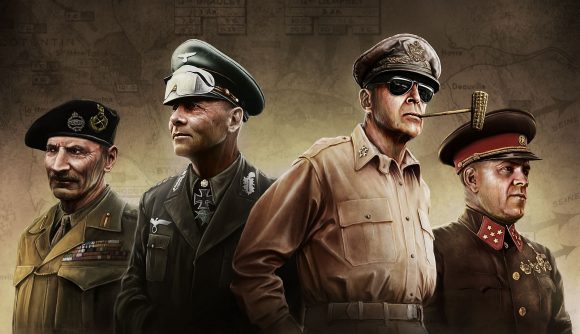 Even though we’ve had announcements of new Stellaris and EU4 DLC, as well as a release date for the latter, it doesn’t look like the Hearts of Iron team are quite ready to put a date on the No Step Back expansion for Hearts of Iron IV just yet.

At the very least, the development team has now made people real, which I imagine will come to the relief of many. This week’s development diary talks all about the changes coming to modding with the free 1.11 patch that will accompany the next expansion. These changes overall may mean that your favourite Hearts of Iron IV mod may need to spend some time updating, but a specific change involves how characters are handled in the game.

“In the current live version, the game has no real concept of a person as a distinct thing,” the diary reads, which I imagine if you were a person you’d find upsetting. Thankfully, the team has spent a lot of time rejigging the back end so characters are distinct entities within the code, and anything a character can be or do can be handled within this ‘container’ rather than having to create duplicate entities for characters across different systems.

Before, you could have instances where a character who was both a political and military leader, for example, get killed off in the political sphere via an event like Stalin’s purges, but still be around as a general who could lead armies. No more.

Other changes for modders involve the upcoming tank designer, as well as railways which will be getting new significance with the next expansion and the free supply rework.