South Park: The Stick of Truth will be censored in Europe – which, given the glee South Park and its fans have always found in the offense of others, is about as close to perfect promo as Ubisoft could ask for.

Thing is: European ratings body PEGI didn’t need to waggle any threatening banhammers to prompt the edits. Rather, Ubisoft’s European division made the decision to expunge The Stick of Truth of some of its more extreme cutscenes themselves.

In their place, they’d like us to watch carefully-crafted stills at selected points during the course of the game. Here’s one of them.

It’s an oddly topical image: an downtrodden avatar of European culture and history, weeping in front of an EU flag. 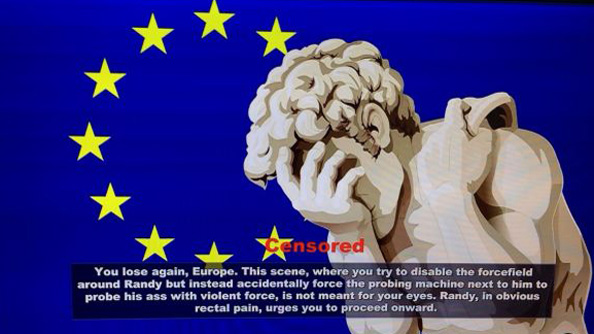 The descriptive tone lends the screen a distinctive text adventure vibe missing from most of South Park’s AAA contemporaries – so that’s nice, I suppose.

“The game was assessed by us and deemed acceptable for a PEGI 18 rating,” said a PEGI ratings board rep the other day.

“As far as Ubisoft is concerned, all we know is that at some point a decision was made to change the game content for their own marketing reasons. Those reasons are not something that we are privy too, so we are not able to give you any further details.”

Keyword: marketing. Do you think the censored scenes will help or hurt Stick of Truth’s sales?