We write a lot about League of Legends on this site, and I often find myself choosing the third or fourth potential header image to attach to a post. Some days, it seems I’m more likely to come face-to-screen with an anthropomorphic sex kitten or come-hither tree nymph than not. It’s a pervasive problem with the genre – and so when I talked to Heroes of Newerth’s art director Jesse Hayes, I asked whether S2 thought about how female characters were presented when working on art and animation for their new MOBA, Strife.

“Oh, definitely,” he replied. “It’s funny here because, that’s something we’ve been really careful of, and the artwork for this particular character…”

Here Jesse points to a poster of a hero from Strife’s roster, teen pirate Caprice: 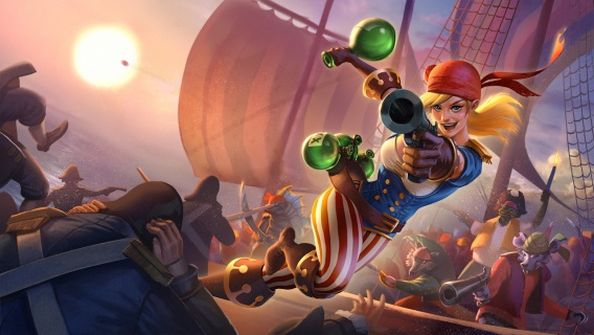 “…show her off in a different light to how she actually is. It’s something that we’re very careful of.

“Pretty much we have three [female] characters in the game right now and I don’t think any of them are overtly sexualised in any way.”

“But also we want to make people who are appealing,” he added. “Not necessarily sexually, but we want to make characters who we are attracted to as people, that are visually interesting.”

Hayes said that the deeper, more-structured approach to character-building S2 have adopted for Strife made the process “actually kind of easy”.

“Because we’re trying to identify these rich stories and background details. Basically, the character we have defined, that’s the character we make. In Heroes of Newerth we would be like, ‘Oh, we need to make the sexy version of this alt avatar’, but we don’t really have that in Strife.

“Now we have characters with personalities,” he concluded, “and if a character’s personality happens to be confidence and whatnot, then fine. It’s kind of a lot easier this time around, now we have guidelines to follow.”