The core of the Heroes of Might & Magic games haven’t changed much in the past 20 years. Since the beginning you’ve commanded your heroes and their attached war bands around the campaign map, battling monster encampments, capturing towns, and collecting conveniently abandoned resources. Each iteration brought better graphics and new armies but the core mechanics remained the same.

There’s a reason why the games haven’t changed much. It’s because the fans don’t want change. They actively campaign against change. That puts Limbic, the team responsible for pushing the series forward, in an awkward position.

One of the people responsible for building this new Might & Magic is brand director Erwan Le Breton. He’s a veteran: having worked as a producer on the last four Might & Magic games. HIs work on Heroes VI began with a team brainstorm: what would the perfect Might and Magic game include? Their conclusions: more levels of strategy, an RPG reputation system like the one in Bioware’s games, they wanted to have some of the persistent elements they were seeing in MMOs, like an always connected community of adventurers.

“The community was saying Heroes 6 was the worst game in the series ever,” Le Breton tells me. “All the changes that I mentioned […] they said it wasn’t heroes.” They complained that time and money had been spent on new features instead of refining other parts of the game.

“Heroes VI in this perspective was very innovative but it was hard to implement everything in the game and in the end all of us are disappointed with the final product compared to our original vision,” Le Breton says. “It was a question of time, money, and ambition. It was not the Heroes of our dreams.”

By the time the game released, Limbic felt they were “doing the game against a certain chunk of the community instead of doing it for them.”

So, when it came to Heroes VII “in the heart of the core team was how can we make a game for the fans?” Le Breton admits. “We want to do a good game but don’t have a vision for how Heroes should be.” A lot of the core team who worked on Heroes VI had left to form a new studio.

This relationship with the fans has left a lot of Limbic’s team with “mixed feelings,” Le Breton admits. “For some people in the team, including me sometimes, it’s frustrating to always go with the conservative portion of our audience.”

Limbic asked the fans to vote for two of Heroes VII’s playable faction. The voting took place over two rounds, each time the fans were offered a toss up between two competing factions. The first was a vote between the wood elf Sylvan and the dwarven Fortress factions. “We made bets in the office and everyone was saying dwarves would have a hard time against the elves.”

The elven faction’s been in Heroes since very early in the series, whereas the dwarves were only added in Heroes V. “The community complained that [Fortress is] boring,” Le Breton said. Limbic said that any dwarves in Heroes VII would be redesigned to be a more exciting group “but the community would have to trust us on that. So Sylvan was a no-brainer.”

The second choice, between dark elves and demons, went the same way. The community wanted even more elves.

Even when the team proposed shaking up the components of these factions the community voted against it. “We tried to bring freshness by proposing three different line ups – one very conservative, one very innovative, and one kind of mixed.,” Le Breton explained. “Not surprisingly, the conservative line up won – you propose to the fans what they want and what they want is what they’ve played before with more beautiful visuals.”

And, from what I played of Heroes VII, that’s what Limbic have made: it’s the same Heroes formula with more beautiful visuals. 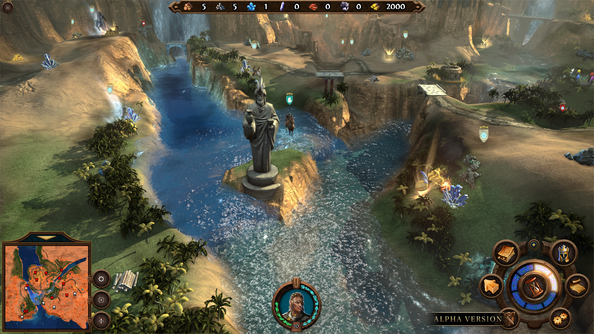 Across the desert landscapes of the two levels I played I took turns with the AI to move my warbands between enemy encampments, discarded bundles of resources, and poorly guarded towns. Much as players have done in the previous games.

Limbic are attempting to inject the mission structure with a bit of new life, at least. I didn’t have a town of my own in the first level so I couldn’t hire troops or respawn my hero if I got caught short in combat. Instead I had to avoid combat and visit three factions across the map which needed to be freed from their cages, trapped there by a group of mage slavers.

Freeing the centaurs triggered one of Heroes VII’s gorgeous scripted events. The wizards had put the centaurs to work in a pit mine beneath a huge dam. Breaking the dam sees the water pour through the cracks in a torrent, filling the pit mine below and drowning the AI’s troops.

Once you’re done with the campaign, as in earlier games, you’ll be able to continue playing in Heroes’ skirmish mode. And, while Le Breton couldn’t confirm it, he said “The community expect a random map generator and we want to have it but it’s a question of priority.” He said it seems to be possible and “it’s highly possible it will come after release.” So Heroes VII is likely to have a long half-life for dedicated fans. 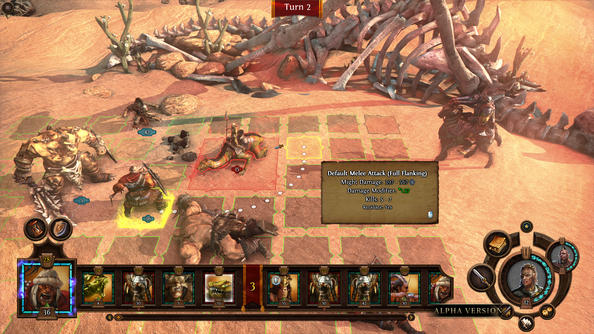 Still. Like the other Heroes games, it has an odd static quality – monster encampments are stationsary, waiting for you to attack them, resource bundles are simply left out for you to be picked up, the enemy AI sits near its town, again, waiting for you. Heroes VII may please long time fans but it’s not turned me into one.

Le Breton understands conservative fans: “Being a player myself, for some IPs I like very much I like it the way it is, I don’t want it to change to much,” he says. “It’s rewarding to meet those guys at fan days or at public events, like Gamescom or PAX East, and see the spark in their eyes when they mention the game.”

But, as Le Breton points out, “The team that was working with me [on Heroes VI] went on to form Amplitude and redefined 4x games with Endless Space and Endless Legends. This was the kind of thing we did. We took established genres and pushed them to the 21st century. That was our mandate, our common vision.

“With the new team it’s like ‘Let’s please the fans and not because we’re marketing guys but because it’s what we like to do’.