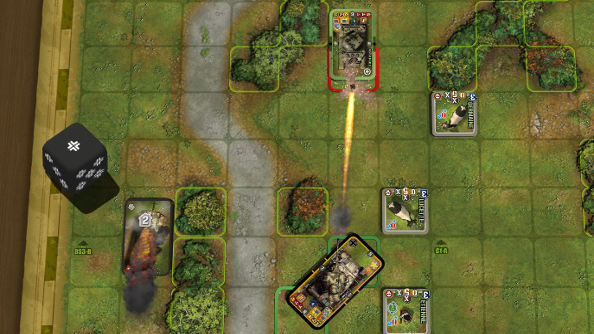 This week, we’re taking a look at the digital adaptation of Heroes of Normandie, the World War 2 board game. It’s releasing on iOS soon, but is already out on PC. 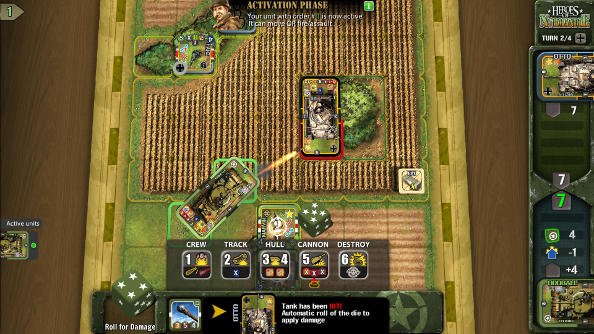 You might be playing it on PC, but Heroes of Normandie looks every part the board game that it’s based on, right down to all the tiny icons and stats on the detailed tokens that represent the units. Part card game, part miniatures game and, of particular importance here, part wargame, it’s a triple threat with a light hearted tone – the Germans, for instance, all look like caricatures who might work for the Red Skull – that belies its surprising complexity.

Each round of the turn-based battles is split into three phases. In the order phase, attackers are designated. That’s the first big wrinkle: some of your units will be left out, so you’ve got to pick your attackers, running the gamut from tanks to support infantry, for each round wisely, taking into account their position and firepower. Then comes the activation phase. This is where units with orders can move or shoot, while some exceptions like tanks can do both using specific weapons. Finally there’s the supply phase, where the units without orders can move.

Within these three phases, wartime stories play out: desperate sprints to capture documents protected by the enemy, heroes sacrificing themselves so that there comrades can live to win the day, countless tense fights hinging on the role of a dice. 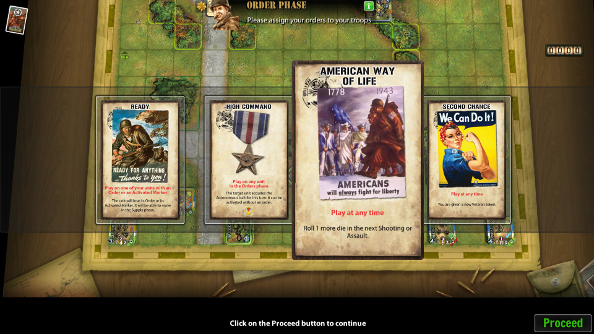 The battlefield grid isn’t just full of units – it’s littered with obstacles, buildings and cover, as well. Expect to spend quite a bit of time in hedges. They can halt your units’ movement since wandering into a hedge stops them from pushing forward, but hiding under all that greenery also gives them a defensive advantage and allows them ambush the enemy. That is, unless they’ve been spotted by a recon unit, opening them up for an attack.

When units engage each other, what happens next depends on both the weapon and the unit. If you’re fighting a tank, for example, it’s not enough to hit it. The only way to destroy it in one blow is by rolling a six, otherwise you’re rolls determine a specific type of damage, and you’ll need two of a kind to demolish it. Grenades have their own rules, too. They can take out groups of units all at once, but it’s possible to miss the target, with the grenade bouncing off to the side, only doing damage to part of the group.

A lot of units can be easily taken out in a single attack, so plans and armies can fall apart quickly. That’s why you’ve got a deck of action cards to save your skin when everything’s looking grim. Some have immediate effects, but there are others you can use to plan ahead. Some enemy infantry getting too eager with the grenades? Slap down a card that lets you toss their explosives right back to them next time they try to blow you up. 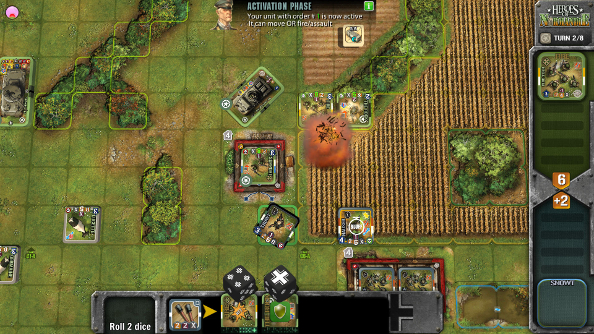 There are a lot of rules and stats to remember – it’s why so many tabletop games have manuals that look like tomes – but Heroes of Normandie comes with an in-game wiki, while right clicking pretty much anything brings up all the information you’ll need to know. And all those intricacies, traits and abilities that you’ll eventually learn equate to strategies and tricks that transform fights into flexible tactical puzzles.

Our ‘The World in Wargaming’ series is created in association with Slitherine. Heroes of Normandie is available on Steam and the Slitherine store.