Update, October 9: Junkrat is now live in the PTR, as are details on all his traits.

The PTR servers are back live following the update, and we’ve got all Junkrat’s talents listed out for your convenience.

Wondering how chests work in the Nexus? Here’s our guide to Heroes of the Storm loot boxes.

Update, October 9:Junkrat is hitting the PTR, and lots of details on his abilities are now available.

You can check out the full patch notes here. The update includes changes to the ranked Battlegrounds rotation, some user interface tweaks, and the return of previous Hallow’s End seasonal items. There are also a big set of hero changes, with a particularly giant array of tweaks coming for Zul’jin and Muradin.

Original Story, October 9:The latest ‘in development’ video for Blizzard’s MOBA, Heroes of the Storm, shows off Junkrat and a number of spooky Halloween skins, sprays, mounts and more.

Heroes of the Storm players are advised to make the most of the next couple of weeks before Junkrat arrives to annoy you as much as he does Overwatch players. He’ll be an assassin.

Besides Junkrat’s alternate skins, the video showcases Halloween skins for many of the Nexus’s other residents, one of which – for Greymane – is delightfully named Doctor Wolf and Stein. There are also new sprays, character portraits, and mounts – including a horse who likes to dress up as a ghost. 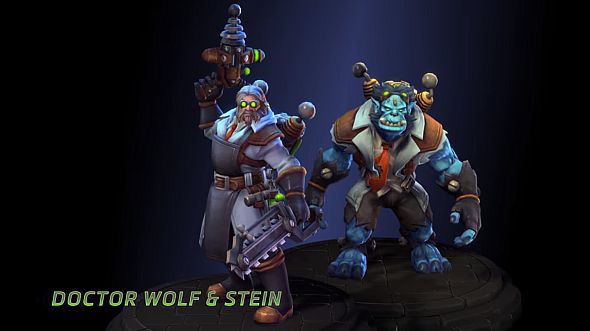