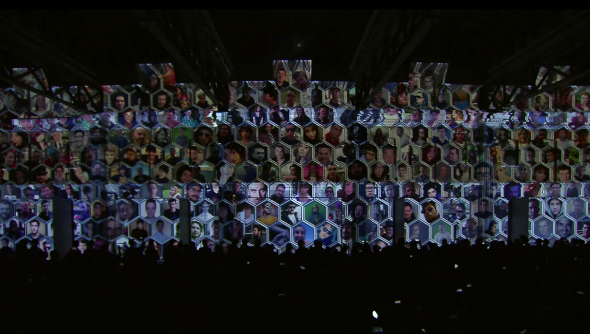 We all know that Blizzard have very high levels of respect for their fans, but it’s always wonderful to be reassured of this through grand gestures. Last night in London, at ‘The Calling’ – Heroes of the Storm’s public launch event – Blizzard went all out with a huge, building-sized tribute to players of the hero brawler. It’s quite something, and you can watch it in action right now.

The camera in the video focuses on a massive wall that up until this point has just been part of the set dressing. But suddenly it’s lit up with projections that show the faces of hundreds of registered Heroes of the Storm players link together to create a huge mosaic. The pattern disintegrates and proceeds to turn into a cinematic made up of lots of familiar Heroes of the Storm motifs and images, including a teasing look at the forthcoming Diablo-themed map.