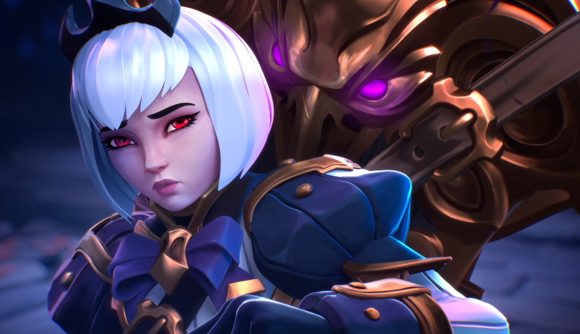 November 4 Orphea’s full list of abilities and talents has been revealed.

Heroes of the Storm has historically been about bringing together classic Blizzard heroes, but Orphea, daughter of the Raven Lord, is going to change that. She’s the first original hero designed exclusively for HotS, marking the dawn of a new era for the MOBA – one that goes beyond the Blizzard canon to include original characters.

She’s also free for BlizzCon attendees and Virtual Ticket holders, so plenty of hardcore fans are getting access. The teaser’s light on gameplay details, but it does offer a clue to her abilities – loads of dark magic, with long trains of phantom tendrils and otherworldly mouths dealing damage to opponents.

You can see that teaser for yourself here, courtesy of the official Heroes of the Storm Twitter account.

Overflowing Chaos (D) – Hitting an enemy Hero with a Basic Ability grants 1 Chaos. Chaos can stack up to 3 times. While Orphea has Chaos, her Basic Attacks against Heroes consume all Chaos, dealing 50% increased damage per stack, and healing for 100% of the damage dealt.