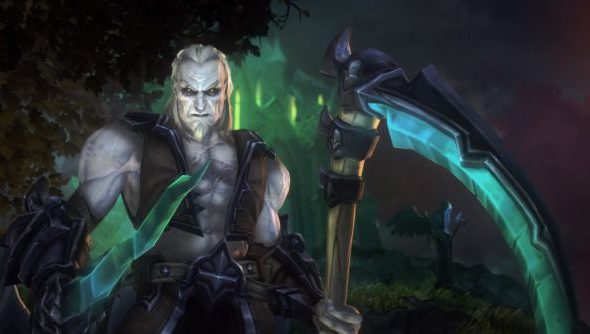 The latest Heroes of the Storm patch has arrived, with an undead-raising, scythe-wielding Necromancer shepherding the shambling masses of balance tweaks, bug fixes and UI improvements. Xul, of Diablo 2 fame, brings skeleton summoning and debuffing talents a-plenty, while the rest of the patch has some nifty UI upgrades for spectators and players alike, as well as buffs to Nova and nerfs to Rehgar.

Heroes of the Storm is just one of our picks for the best free games you can play.

Here’s the spotlight for Xul, showing off all his enemy killin’ ‘n’ necrofyin’ abilities and, er, his dance:

His impact on the highest levels of play is yet to be seen, but any hero in any MOBA capable of summoning other units is always one to look out for. He can roll down a lane with more effectiveness than his peers thanks to the ever-growing army, and his control abilities are unique for stopping enemies doing what they want.

Meanwhile, the latest in-game event, the Lunar Festival, has come to an end and the store has been updated to reflect its passing and Xul’s arrival. Nova’s been tweaked up slightly, as the community was complaining she didn’t currently do enough damage to trade off her squishy nature. Rehgar comes down (again) as Blizzard try to find an acceptable winrate for him.

The full patchnotes are up on Battle.netwhile fansite HeroesNexus has a bit more info if you want to dive deep.