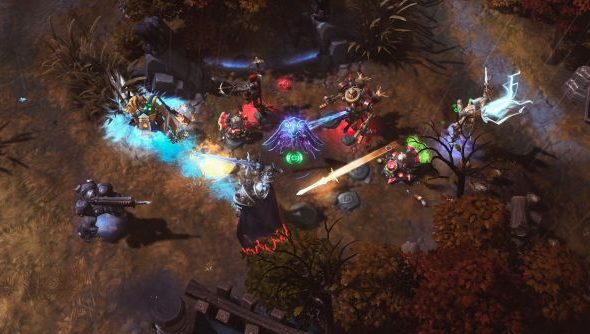 Blizzard’s contender in the 5v5 arena – Heroes of the Storm – has finally emerged from its cave in Closed Beta threads. Selected players will now be able to play the game whenever they feel like it from the Battle.net launcher.

The upgrade to closed beta comes bundled with a slew of new features, including a shiny new battleground and a fresh and fancy hero.

Sky Temple will be new battleground, outfitted with a desert theme and controllable temples that fire energy beams at enemy structures. You’ll be able to play on this new map as Thrall, a Horde Warchief with powerful melee-based abilities such as Chain Lightning, Windfury, and Earthquake.

The new Hero League is a ranked play mode for high-level players. Level 30 players with a collection of ten heroes can join either solo or as part of a team, with every win and loss contributing to their rank.

Finally, Draft Mode allows you to build a competitive team, countering your opponent’s hero choices and making decisions to help dominate the Battleground.

If you want to be a part of the closed beta, you’ll need to sign up at the Heroes of the Storm webste, or set you Beta Profile Settings at Battle.net account management to ‘opt in’. It’s not guaranteed that you’ll be able to play, but should you be selected you’ll be able to play whenever you’d like from here on out.