Heroes of the Storm’s last dance with Overwatch involved trying to make payloads work in a MOBA, resulting in the addition of the Hanamura map. Simply put, it didn’t work, and the map was removed from all serious play after a couple of months. That work is ongoing, and it sounds like there are no limits on what Blizzard are willing to do to fix it.

Overwatch won’t lack representation in Heroes of the Storm – Volskaya is on the way.

“We’re going through, taking a look at that battleground, basically looking at the whole experience,” John DeShazer says, lead battleground designer. “We’re actually putting everything on the table about what we want to do to address the concerns from the players. We took a lot of feedback while it was live, so we’re trying to go through as much as possible.”

Concerns ranged from games being very short, to teams not wanting to finish games and simply farming their opponents to increase match time and get bonus progression XP. The payloads themselves didn’t force fights, leading to some very passive games, and making it unclear to less experienced players what they should be doing. Even standard Heroes of the Storm mechanics, like taking down the second enemy fort, which are at least supposed to be common between maps, were left on the wayside. Not a good map, then.

As said, work is ongoing, meaning no firm news to report yet. “Unfortunately I don’t have any specific details of what we’re going to be changing,” DeShazer explains, “because all of that is still under development. We’re iterating on it very quickly, but I also don’t have any timeframe of when we’re going to release it just yet. I will let you know we are in the middle of developing it again and trying to make sure we listen to the players about what their concerns were and why they didn’t find it as enjoyable an experience.” 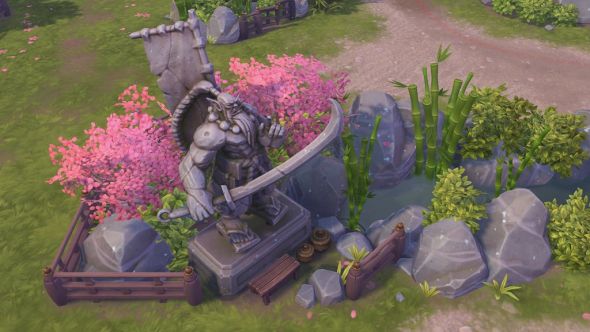 However, this isn’t putting paid to the idea of non-direct battlegrounds – one where you can’t directly attack the enemy core with your hero. DeShazer calls Towers of Doom a “very successful” version of that style of battleground, with the possibility for comebacks and “dynamic moments.” The developers also learned a lot in the differences between Towers of Doom’s success and Hanamura’s failure. Why did one work while the other didn’t? Time.

“I would never say that it was off the table doing it again in the future, we’re definitely going to, but I also think we spent a lot of time and development on Towers of Doom. Hanamura was a shorter dev cycle – I think that ended up costing us a little bit in the long run. We definitely want to make sure that if we’re going to do something like that we plan for it accordingly. Give ourselves a lot of time because they’re definitely a trickier map to develop.”