Blizzard call Heroes of the Storm a hero brawler. Others call it a MOBA. We call it a triumph. It is Blizzard’s version of what Dota and League of Legends do so well: a compulsive mix of strategy gaming, timing, 5v5 teamplay and ridiculous shoulderpads. Even now, in it’s early alpha stage, it feels a complete blast.

Tim: Before we begin I want to explain our two contrasting backgrounds. I am not a MOBA player. You, on the other-hand, Nick, love them, right? You’ve put over a thousand hours into Dota 2?

Nick: And about 300 hours into League of Legends.

Tim: So the weird thing is: we both really adore Heroes of the Storm. How the hell did that happen?

Nick: Other mobas are still really intimidating for newcomers, but there comes a eureka moment, where everything just clicks.

Heroes of the Storm on the other hand doesn’t require you to play hundreds of hours to reach that moment. It’s fun from the moment you start playing thanks to some pretty nifty reforms of the MOBA formula. 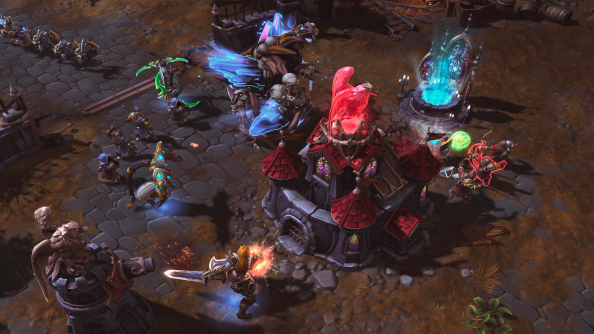 Tim: Let’s get to the detail later. The first thing I was really amused by is the roster of the champions. It was great to see characters that I’ve been following around in the WOW and Starcraft universes for close to a decade suddenly be playable. I’m amazed by how much personality they’ve crammed into their cast. I don’t quite know how they’ve done it, but they all play how you’d expect them to play – Nova, a Terran sniper, is a stealthy monster, dropping aerial bombardments and long range shots – whereas Diablo is a grumpy fat beast, casting pentagrams and breathing fire. It’s mad and wrong but oh-so right.

Nick: Blizzard are in a great position: they have a almost infinite wealth of characters to draw upon from their three iconic universes. Putting them into the game is also a breeze as they already have the majority of the assets. This means they can get new heroes to the frontlines incredibly fast, and also spend more of their resources on other features.

The backdrop for the game lets them be rather silly when it comes to content creation. There’s no tip-toeing around lore conflicts, because this is one big lore conflict and on the grandest of scales. It’s lovely.

Tim: What’s interesting is just how well they all fit together. The other night I was playing as Uther, a human paladin, while you were rocking around the map in a siege tank. Yet, somehow, me healing a tank, felt natural.

Now, the maps are considerably smaller than in LoL or Dota, right? That seems to make the games far shorter than other games.

Nick: They’re a lot smaller but there’s something else that contributes to the average twenty minutes per game. LoL and Dota feature a period in the beginning of the game dedicated to ‘farming’: where players focus less on killing their opponents and more on obtaining gold to buy powerful items. Here there’s no such thing: instead you’re encouraged to go for each others throats from the get-go.

This is due to the level and talent system. Your level is team wide, and any experience you gain from lanes, mercenaries (jungle creeps) and enemy heroes are shared. Every three or so levels you gain the opportunity to select a talent, which can either upgrade your abilities or get your hands on new ones entirely. 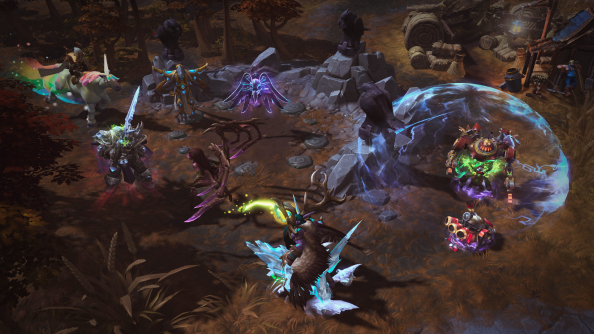 Tim: I noticed that you weren’t yelling at me to not hit the creeps so you could get the XP. It felt like a weight had been lifted.

The map design seems strange for a MOBA. They all have little camps of baddies that, when you’ve beaten them up enough, they wander down a lane for you, attacking the towers. And the towers themselves can run out of ammo. Why have they made these changes?

Nick: To streamline the pace of the game. Using your own minions in combination with these mercenaries means you can whittle down an enemy teams defenses. Once their towers are out of ammo, they’re defenseless until they restock. This is the perfect time to push and get one step closer to their palace: the ultimate structure that explodes into a fiery victory if you manage to topple it.

But that’s not the biggest change: what about the map specific objectives?

Tim: So, this might sound shallow, and demonstrate easily pleased I am.

But me turning into a giant fire-breathing Dragon Knight who can punt characters across the map back to their spawn might be one of my most memorable moments of the year so far. The first time I did it, I just couldn’t stop laughing. It’s funny and tactically appropriate: I feel like the teams are always racing to complete objectives rather than just farming creeps. When they do, they’re able to gather together and really push down a lane.

Nick: The Dragon Knight Tim described was the main objective of Dragon Shire, one of the four maps available in the alpha. It’s got three lanes just like any old MOBA, but also features two capturable shrines at the bottom and top of the map. Once captured you can rush to the center and become the mighty Dragon Knight: a huge monstrosity with tons of health and incredible damage.

Here, why not see for yourself with a game we played:

Every map has a unique objective just like this one. Haunted Mines only has two lanes, but you gain access to the mines – another map entirely – periodically. It’s a race to collect 100 skulls to power your undead golem, which steamrolls down a lane wreaking havoc.

Blackheart’s Bay is governed by the pirate himself, who also owns a ship ladened with cannons. Fetch him enough coins from chests and mercenary camps and he’ll turn those cannons on your enemies base.

Finally Cursed Hollow spawns ‘Tributes’ around the map which must be collected by either team. First one to three inflicts a terrible curse on the enemy team: their minions are reduced to one HP and their buildings have had their own health halved and are disabled.

Tim: There is a dirty secret though. We’ve been playing HotS in VS. AI mode, rather than against real players. Part of that is practical: the limited number of players in the alpha means that anyone not part of a five person pre-made team is probably going to get smashed. But also: there are no penalties for playing in this mode. You earn the same XP and gold, you earn the same bonuses for playing together. And it’s just as much fun. The AI puts up a fair fight, and the player’s we’ve come across want to work together. It’s very, very rewarding.

To the extent, I didn’t realise we were playing AI until we’d completed a couple of games.

Nick: The AI does a respectable job of creating a life-like opponent. It’s still simple to outsmart them with some coordinated team work, but they do have their moments of brilliance. I’ve even lost a game or two against them.

Here’s the thing: I never play Dota or League of Legends unless I’m invited into a party. Why? Well it’s because more often than not my random allies are quick to turn to a toxic blame war on every scrutinised mistake. I’ve not felt that once with Heroes of the Storm, even when playing against real people. There’s just so much less that can trip you up and land your team in a spot of bother. It feels like a relief. 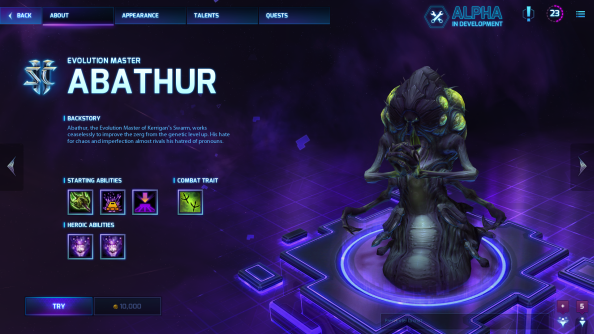 Tim: That’s not the only piece of design that pushes players to enjoy themselves together. I really enjoyed playing as Abathur – a zerg hero who is unlike anything I’ve seen before. He plays like a parasite – you jump on a friend’s shoulders and fire spikes from him, as if you’re a mounted turret on his back. You can use a deep tunnel ability to nip around the map really quickly, plant toxic mines, and even send little locusts down the lane to do your dirty work.

He sounds complicated, but I think he’s probably the best way to learn how to play a MOBA that I’ve ever seen. He’s like a team-based tutorial.

Essentially, as soon as he leaves the free character rotation, I’m going to have to buy him. And Raynor. And possibly Barbarian.

Nick: Unfortunately (or fortunately) for us EU folk, we don’t have the option to purchase heroes with cash until Blizzard sort out some pricing in our currencies. We can however still take a look at prices available to the US folk, and it paints an awkward picture.

Heroes can be bought with either in-game gold or cash. A hero can cost anywhere between 2,000 and 10,000 gold, or $3.99 and $9.99. Prices outside of dollars aren’t yet available. There’s no real explanation as to the difference in cost between each hero, and this can inadvertently lead to the belief that you’re buying power.

Things get a bit more expensive when you look towards skins and mounts, which are only available with cash. A skin starts out at $9.99, all the way up to $14.99. Some of them are quite good, complete with their own animations. Others – like Raynor’s ‘Patriot’ skin at $9.99 – are just paint jobs and don’t seem to reflect that in the price. By far the most expensive item is a custom unicorn mount at $19.99.

I’m a bit baffled as to why the vanity stuff costs so much more than the actual meat of the content: the heroes.

Tim: Yeah, it’s a fair point, and I imagine Blizzard will experiment with pricing and sales. I get the feeling that Heroes of the Storm will be spending a long, long time in alpha and beta. Probably as long as Dota 2 did.

So: if you have the opportunity to get a beta key. Do. It’s great.